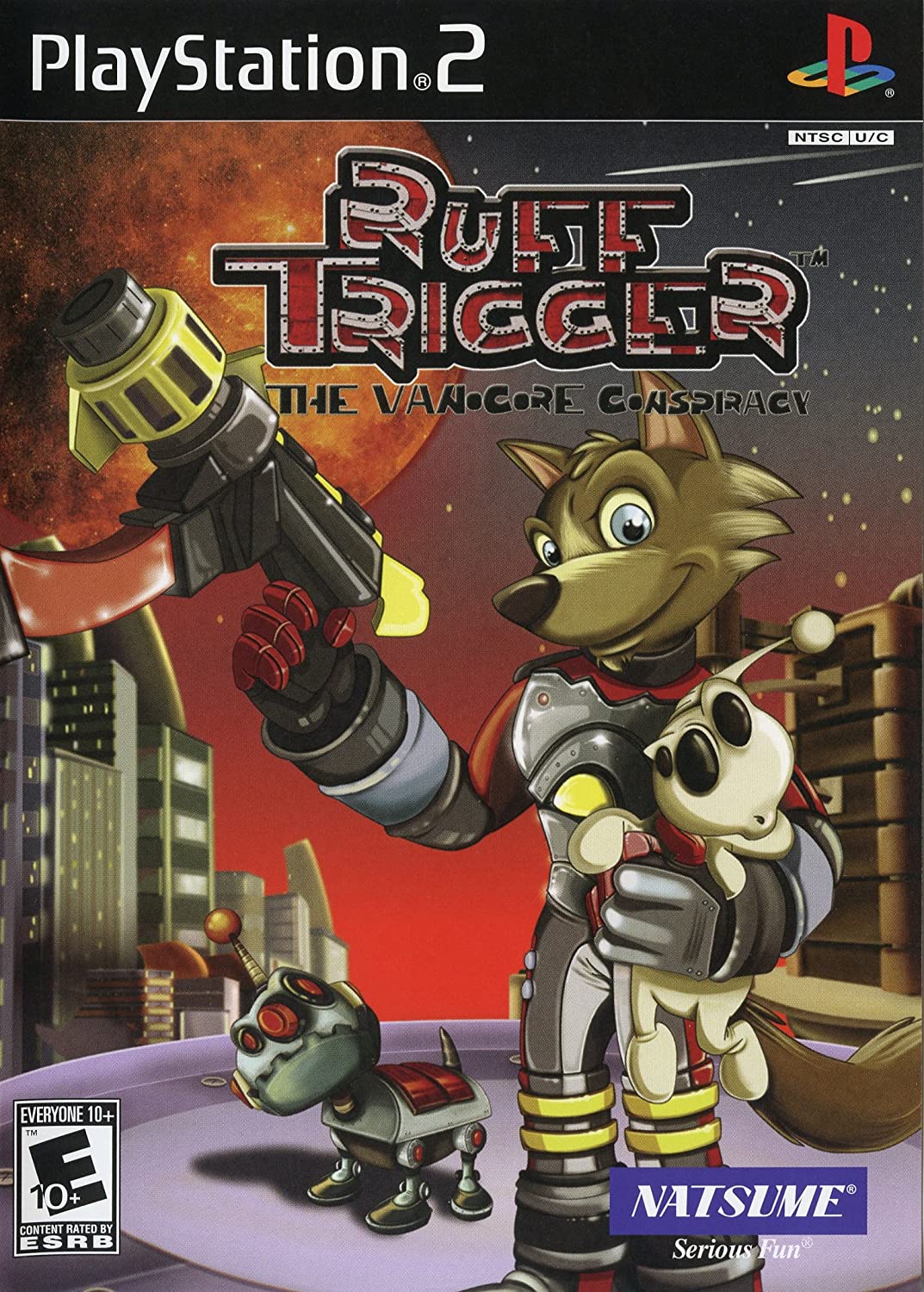 Ruff Trigger is one of those games where you can tell that there wasn’t a lot of playtesting for balance. The controls are fine enough but everything can be cheesed really easily and the difficulty level ends up being very low. The plot will have you scratching your head at times with how random it is. So all in all this doesn’t have that AAA feel but the gameplay itself is pretty fun and the game gets some points for having so many cutscenes.

The game starts with Ruff being put on another mission. He has to round up the Piglots that have been scattered across various planets. These look like little gerbils that will follow you around. Ruff isn’t thrilled at having a mission and complains about it, but the guy complains about everything in this game so the boss wisely ignores him. Can Ruff manage to track these guys down? Meanwhile there’s a mysterious Hulk-like creature who keeps showing up to get absolutely destroyed by Ruff before retreating. What’s his deal?

Wait, what about the Vanocore Conspiracy?? Well, that doesn’t come into play until the final 2 levels and it pretty much meaningless to the plot. There’s no time to process what the two villainesses even want to do so I don’t know why this was included in the game’s title. I guess it sounds cool though and maybe some parts just didn’t end up making it into the final product. There’s enough lore and characters here where this could have been a cool series. Alas, that was just not to be this time.

So the gameplay is your classic 3D shooter but with a little twist. Rather than running to the end of the level, you will periodically be stopped to go and grab some Piglots. You have to transport them to a teleporter which will get them out of the area. Sometimes this will be mandatory and other times it will be optional. It’s usually a good idea to warp all of the ones that you see though because they get you a lot of money which you can use to buy more guns and armor. Money is a resource you will have a whole lot of by the end so don’t be cheap and just buy the maximum armor every time. It’s like having a permanent second health bar.

Your guns are also incredibly powerful to the point where you can beat most bosses in under a minute. The only exceptions are the bosses that you have to beat with Piglots rather than firepower. Those bosses usually have you pick up the piglot and drop them into a teleporter in the middle of the field. As long as you run and jump the whole time then you’ll be one step ahead of the boss so don’t worry about being taken down for the count. The game is really not that hard as I mentioned. Just stick to your guns and you’re good.

Just lock on so you can move from side to side and that will dodge all enemy attacks as all they can do it fire in a straight line. When there are more than pone opponent, just knock them off one at a time. Now, there is a Werewolf mode in the game but you never have to use it. Seriously, I didn’t see any reason to do so. The attacks are very slow and none of them are as efficient as the guns so why bother? This is what I’m thinking of when I’m talking about game balance. The werewolf form is seemingly supposed to be very strong considering that it has a short time limit and you have to look for bottles to replenish this. Then why is it better to be in human form? It doesn’t make any sense.

Also, don’t bother using hand to hand combat. If a bunch of enemies attack you then just jump and do a ground pound. I guarantee that this is the much better way to handle those enemies and the best part is that you will hit them all at once. This way you’re never in any real danger. None of the enemies can hit you when you’re above them like that so I found this to be a good way to get some space. It’s extremely handy in the final level of the game. There are also a handful of racing levels. They aren’t super polished but it was a nice change of pace, I definitely had fun with those.

As for the graphics, I thought those were surprisingly good. Not saying the game looks amazing or anything but it does have quite a few cutscenes and the character models are on point. There are 1-2 levels which are intentionally dark which can be cheesy but the rest of the game looks good. The sound isn’t as good though as there is no decent sound mixing. Some cutscenes are super quiet while others suddenly get loud. That part felt really unpolished. Likewise, the dialogue could use some work. Ruff comes across as a really annoying kind of guy who is constantly complaining without having any good reasons for doing so. It’s hard to even see what the dynamic is between him and the main heroine. I guess they’re kind of together but still like to talk tough the whole time? Naturally she gets kidnapped right away which hurts her hype.

There isn’t really any replay value here. Continuing the game takes you right back to the final level and there’s no stage select. So this is one game where you’ll be putting it down for good after playing through the end. It’s not exactly out of the ordinary but replay value is always a good thing to have. You can get the game for fairly cheap right now though so there’s enough value here to still have a good time.

Overall, Ruff Trigger is a fun game. It’s got solid gameplay and graphics going for it. While the game isn’t super polished and the story isn’t very well thought out, the gameplay is the key thing here. You’ll feel very nostalgic playing through this PS2 experience and I do think that a sequel could have really helped to iron out the rough patches. It’s a shame that this one didn’t do better but I can’t blame people for not buying it. Look at how many years it took me to buy this game right? It serves its purpose as a fun little platformer and you’ll get some humor out of the story cutscenes. At the end of the day it’ll end up being rather memorable thanks to all of this.