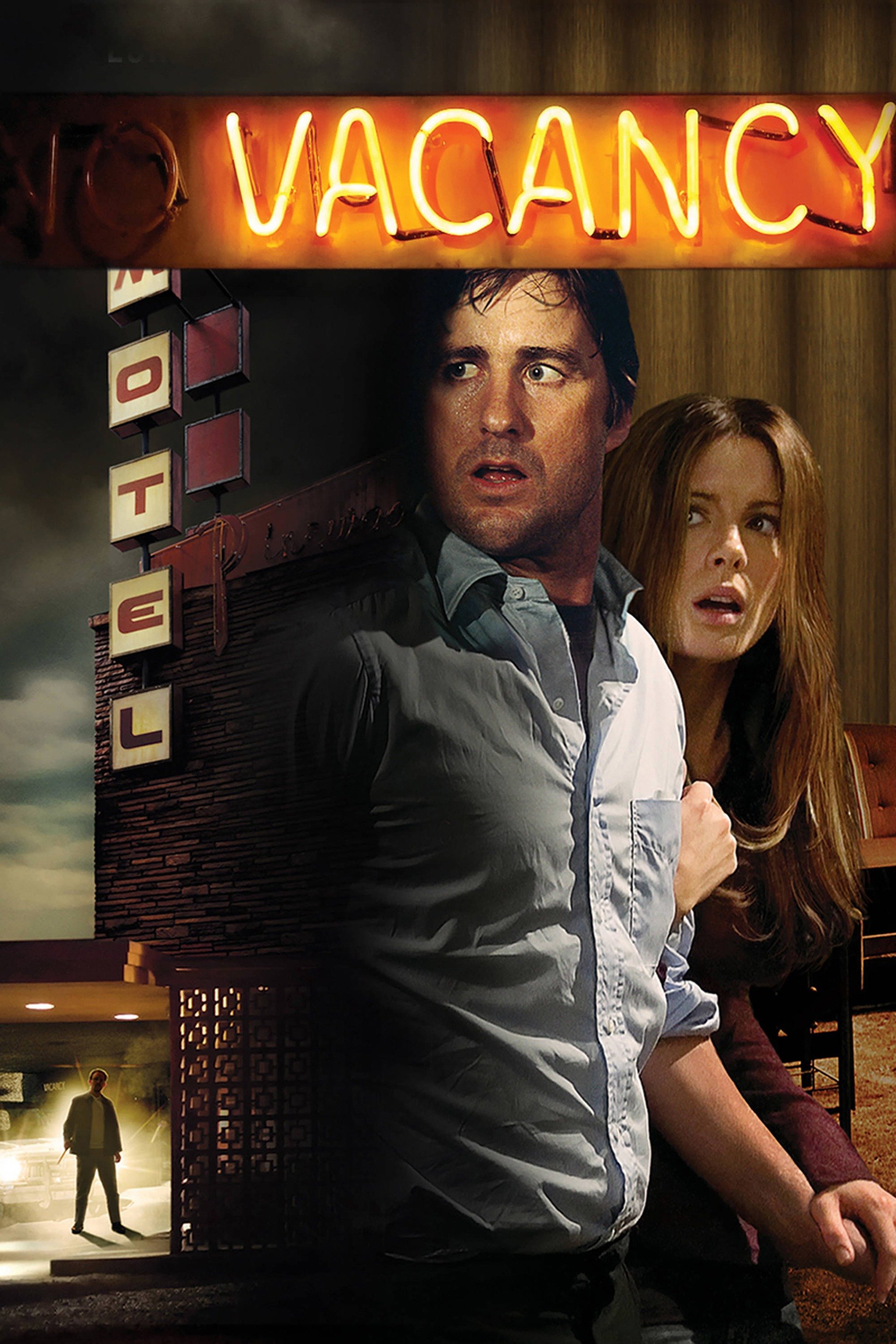 It’s definitely a common trend that in a horror film you have to make it so that nobody is likable. This movie follows that formula to a T but of course that also ends up being a bit of a weakness when you think about it. If you threw in a bunch of really good characters here then ultimately that would only serve to enhance the movie right? Vacancy is an interesting idea and while the execution may not have quite fit the bill, it does stand out a bit from the average horror title.

The movie starts off with David and Amy on a long drive. Unfortunately they’re lost at this point. David doesn’t think that they are but Amy is convinced of it. Then their car seemingly gets damaged when they have to make a sharp turn to avoid a raccoon. David made the right choice in dodging it but Amy gets on his case about the whole thing. She is certainly shown to not be particularly compassionate here. She keeps on heckling David until they finally manage to stop at a motel. The only thing is, they’re now surrounded by a few crazy assailants and they’re in the middle of nowhere. Amy dropped her phone outside and they parked the car a few miles away from the motel. Can they possibly escape this predicament?

The first chunk here is really to set up how the characters are absolutely getting themselves into a bad situation and unfortunately a lot of that really falls squarely on Amy. She gives absolutely no supportive effort to all of this and just takes shot after shot despite being the one who was sleeping for a while. Deciding to cut an apple while in a moving car just seems reckless as well and naturally she gets cut. The film really goes out of its way to make her as annoying and unlikable as possible.

So by the time she drops her phone outside you almost end up blaming her for that completely whereas otherwise you might have cut her some slack. It’s definitely convenient not to have the phone. Granted, I like to think the villains have a jammer somewhere but otherwise the two main characters could have just run into the forest and it would have been a decent idea since they could call the cops and have them track the GPS. Otherwise going into the forest is too risky since they could be lost forever. Still preferable to this situation I have to imagine though.

David’s a much better character from the start as he has a decent attitude about this. He’s trying to stay calm and confident despite being extremely tired since he’s effectively been up all night. Additionally David is the first one to realize that something isn’t right with this Motel and figures out the danger before it’s too late. Things could have gone a lot worse otherwise. He’s usually the one thinking up the plans here and making a move. They make a break for it several times as well although it tends to fail.

Personally I think the best chance would still be to just bolt through the front doors. Perhaps they can catch you and perhaps not but either way it’s a better area to defend yourself with than being trapped in your motel room where they can show up at any time. The tapes in the room give the main characters some prep time on how to handle themselves. I wonder if the tapes were left there intentionally to scare the main characters or if they just forgot. I could easily believe either option tbh. still, the characters didn’t make awful decisions for the most part at least. The most iffy move was when they decided to split up so that David would go to the phone booth while Amy tried the window though. I didn’t think that was a plan that really had any kind of chance.

Also, you should never under any circumstances split up in this kind of adventure. If the villains were to fun to the house and lock the door then you’ve just left Amy trapped in with the villains. It could backfire really badly. The heroes definitely go through a lot here though. There’s even a tunnel underneath the house that has a ton of rats everywhere. Fortunately they don’t bite but it’s definitely something to imagine that the villains have to go through that every time. I guess they definitely don’t back down from those kind of dangers.

The main villain of the bunch if Mason and he’s certainly not great at being subtle. He was playing a tape with a lot of screaming initially and didn’t even hear the main characters enter. So he potentially almost lose 2 victims without even knowing about it. That doesn’t speak very well of him as a villain mastermind at all. By the end he’s your classic horror villain just yelling all over the place. I can’t say I was a fan or that he’s particularly memorable.

Vacancy has a solid ending to be sure but I thought it lost out on one potential jump scare. See, there’s one villain who I was expecting to have one last moment because the way he was hit didn’t seem all that serious to me. I was expecting him to appear as a “Gotcha!” moment but he never did so I have to assume that he was taken out. If so, I definitely did not see that coming but props to the heroes for doing a thorough job.

The movie isn’t quite as violent as your average horror title. The violence tends to be more implied or out of view like when the characters are watching the tapes. That’s always the better way of doing it than having this onscreen if you have to have that violence included in some way. The villains are all definitely mega psychos either way though and this is one motel that you definitely don’t want to have to enter. This may remind David to actually take a look when someone is messing with the car next time. Probably not too smart to let someone under the hood with no supervision right?

The most forced scene though is when a cop shows up. Yeah, I like that the cop quickly went on high alert and was ready for action but the way they take him out of the picture just makes no sense. Seriously he’s got a gun. The characters need to know that he’s their best chance so keep a close lookout. The cop also should have been paying attention since he knows that he’s deep in enemy territory. We get the obligatory “Villain teleports” kind of scene but I wasn’t buying it for a second. No way you are taken by surprise when you already know that the villains are packing weapons and are right around the bend. It’s just not going to happen.

If I were to question another move, it would be how Amy leaves her spot so quickly. If I were her at that point I would be staying up there for as long as I could without food and drink to buy time for a proper escape moment. It turned out well that she left sooner but she couldn’t have possibly known that so it just ended up being a fortunate coincidence for her that almost went south.

Overall, Vacancy effectively shows how spooky it can be to be trapped in a motel room with everyone out to get you. Also if you have super bad luck so this could all be possible. There are only 3 villains but the heroes have no way of knowing where they are at any point so they have to be careful when making a move. That said, the film goes a little too far in making the main heroine look mean and unlikable. I would say to make her better and downgrade David a bit if you want a balance (Don’t make them both awful) but you could have easily made her a little more reasonable and they still get stuck in the motel. That would have helped quite a bit because their dialogue doesn’t help matters. I wouldn’t particularly recommend this one. You can really guess all of the story beats as they come and the core story isn’t strong enough to get past that.