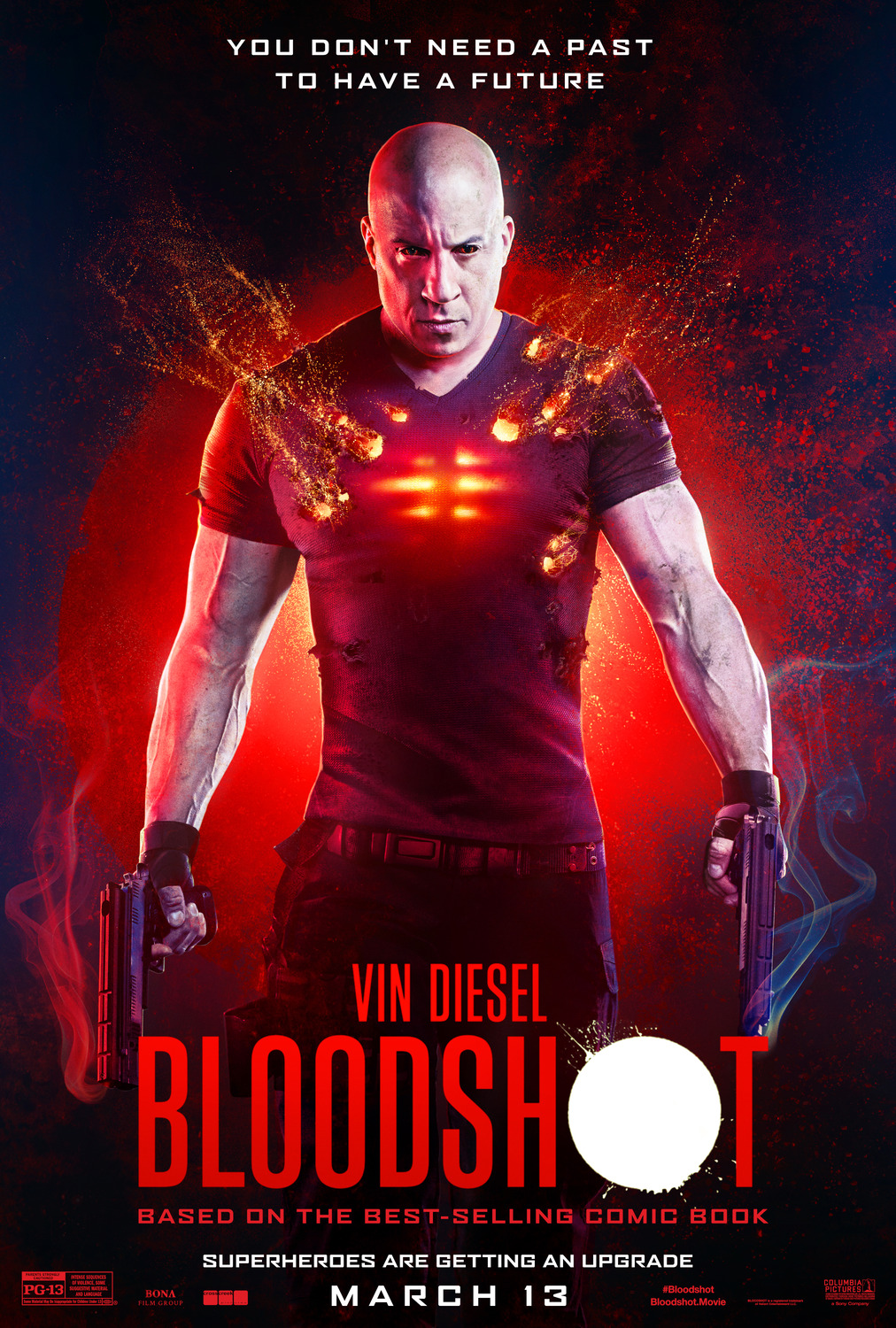 Bloodshot is one of those origin stories where not a lot of people know about him. At the very least I wouldn’t call him mainstream just yet and since the film didn’t knock it out of the park, it’ll probably stay that way. It might have done better if the trailer had not revealed the big twist early on but it’s always tough deciding what should and should not be in the trailer so I won’t blame them too hard there. I thought it was an enjoyable film, one that probably should have been longer but it was fun.

The movie starts with Ray completing another government mission. He’s proven to be one of their best warriors at this point and afterwards he goes on another mission. Unfortunately this one doesn’t go well and his wife is kidnapped and murdered. Ray is murdered shortly afterwards but is revived by a mysterious group led by Dr. Emil. Emil tells Ray that he now has superhuman abilities since his blood has been replaced by nanites. He can heal extremely fast now and can hack just about anything. Ray decides to use these abilities to locate his wife’s killer at any cost. Can he pull this off?

One annoying thing right off the bat is how Ray’s fighting style gets super sloppy after he has his powers. Remember how he was an expert government agent who would go into dangerous situations and always left with his life intact? Not anymore. Now he jumps into every single bullet and trap possible. The reason isn’t just that he’s lazy but also because he wants to strike fear into the villains. Fine, that’s fair enough but it’s still no excuse to put his abilities to their limits. He nearly does push himself too far as he gets blasted a lot. Imagine if he had actually died against the random thugs in the beginning? That would have been extremely embarrassing.

Ray’s a good character beyond that but it did make every fight annoying. Ray is a very determined guy who will stop at nothing to avenge his wife. The scene where he immediately hacks all of the tech around was very impressive and he didn’t waste any time in using his abilities. He had his priorities set from the start and nobody was going to stop him. So that’s the best quality in him and that makes for a good lead. Where he falters is in the romance angle.

The film’s romance is quite weak from start to finish. So Ray’s just lost his wife and he’s already rebounding with KT? That’s pretty bad tbh. I give characters a lot of grief even after it’s been a few weeks but we’re talking 1 day. That’s insane. It then makes the romance scenes with his wife in the beginning look worse since you realize how easy it is for that bond to be broken. All of this adds up to hurting Ray for sure.

I respect him as a great fighter and it’s always fun to see him take names but off the battlefield he struggles quite a lot. Then there’s the main heroine KT who is not on the right side for most of the film but at least there is a decent reason here. When you can’t even breath without tech support and you know that someone has direct access to it, that will always make things a little slippery. You want to be careful not to rock the boat all that much. At least she speaks up more than the others and she can fight when needed. So in the end I thought KT was solid.

Emil is your classic scientist type so there isn’t a whole lot to him. I did think his acting was funny when he has to go through a script. Emil has a lot of fun with it and so I’ll also give him credit for his determination. The guy has a goal and will do anything to achieve it, even if it means reading the same lines a lot of times. Not just anyone would be able to pull that off.

The other villains were really on the weaker side though. None of them were particularly impressive either with their designs of personalities. You had the one insane guy who likes to gloat when the opponent can’t fight back. He seems to really enjoy his part in resetting someone to a rather disturbing extent. One thing’s for sure, you don’t want to be friends with this guy. Then you have another villain who’s heart isn’t really in it but he helps the villains out anyway so I’m giving him 0 credit for that. I don’t care if you’re half hearted about it, if you’re a villain then you’re a villain. Don’t now what else to tell you on that. Voicing some doubts doesn’t help as some kind of consolation victory.

Wigans is the resident genius in the film. He does have a counterpart in the base but you could tell that guy was out of his league from the start. It’s too bad they couldn’t interact though as that would have been fun. Wigans is the kind of guy who is always talking fast to try and stay on top of the conversation and keep everyone confused. It’s fortunate that he knows how to code so well since otherwise I could see someone bumping him off. The humor works well enough here although I’d say his rival was better in that department. So what the rival lacked in skills he made up for here.

While I give the action scenes a thumbs down, the effects are solid. I always like seeing what regeneration looks like in a film and this one definitely got that down to a fine art. The regeneration looks really sharp and most importantly, practical. The nano limits are also established well and visually you can tell when the main hero is starting to weaken. You like to think he’ll be stronger for the sequel if he has to fight other powered fighters and the ending pretty much confirms that so you don’t have to worry about it too much.

Now my main issue is that one part of the film doesn’t get enough time so it’s time for the spoiler paragraphs. Skip the next two if you haven’t seen the film yet and then come back to them later on. It’s a really interesting plot dynamic so if you don’t know it yet you may want to keep it that way. Remember, skip the next two paragraphs and then you’re all set.

So we find out that Bloodshot’s whole origin here is a lie. His wife wasn’t murdered but the group have been putting fake memories into his head. They then change the identity of the person who “murdered” the wife and in doing so they have turned Bloodshot into a murder machine. It’s sort of like the Weapon X program. So the first batch of scenes with Bloodshot escaping the group and enacting his revenge was staged every time as they wanted him to escape. We see that they have been doing this for a very long time. The villains just read their scripts in the same way each time to ensure we get the same results.

It’s all quite brilliant if you ask me but my issue is that we only see the last one that works without a hitch. I think this should have been the second or third attempt. We could then get a montage of this happening more and more. The reason for that is it would help really sink in the fact that they have been manipulating him from day 1 and how traumatic that is when he wakes up. Actually seeing this more than once would have been very helpful for that reason. Not saying we need to see the whole sequence but at least good chunks of it each time.

Overall, Bloodshot may not have been a great movie but I did think it was good. It handled the origin story effectively and gets you hyped up for what could be in the universe. I think the series should stay away from the romance although that’s probably a little too late at this point. That’s one of the angles that holds it back a bit and one part of the origin should have definitely been longer. I also think you could do a lot more with the fight scenes. Don’t have Bloodshot act as a complete sponge the whole time. Yes, he can take damage but he shouldn’t be pushing it like that or he could end up losing to someone weak.