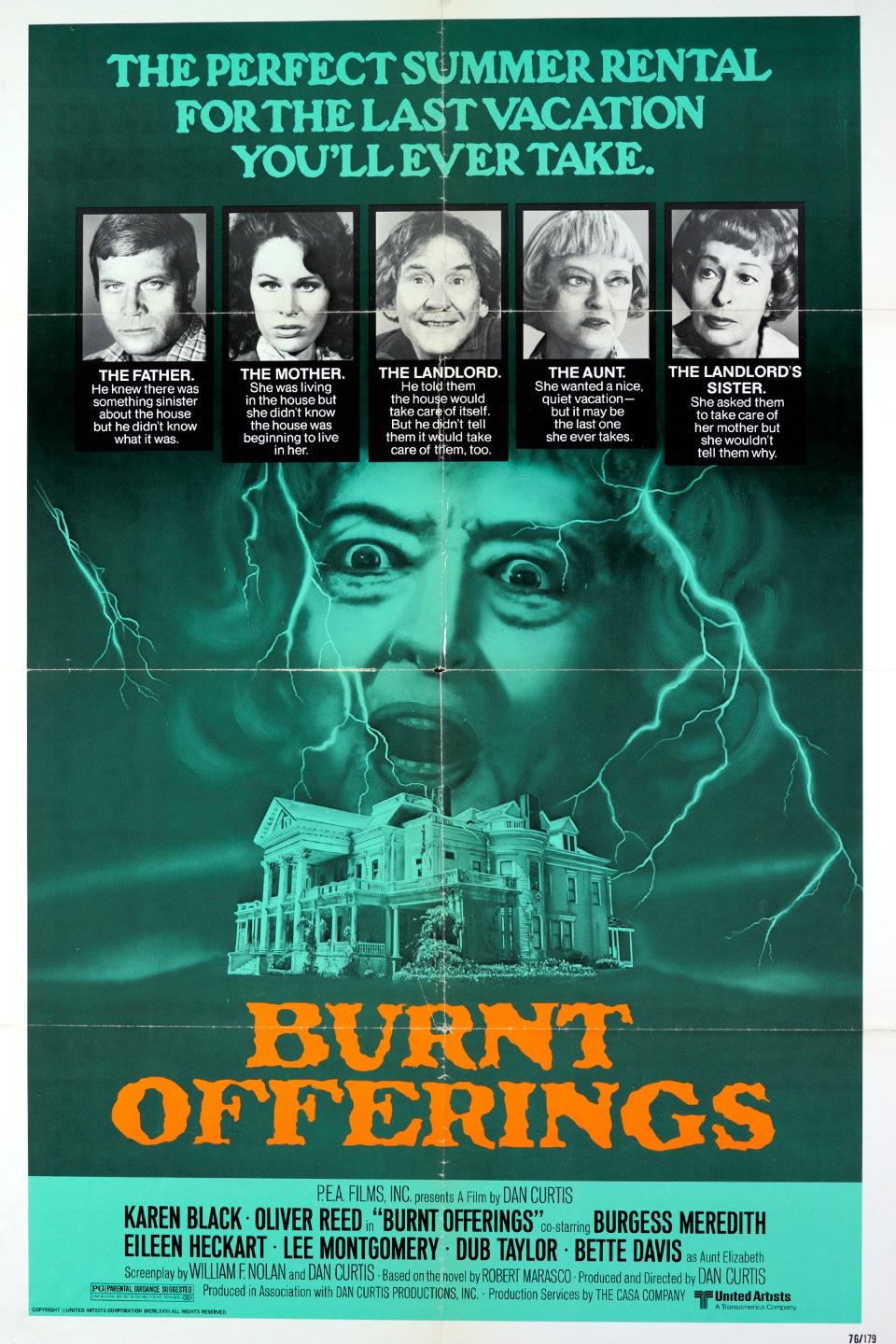 Burnt Offerings is a film where the story was cooked a little too much and so it all drags on quite a bit. The characters have virtually no willpower so the house is able to give them the hands right away. At no point do you think the main characters stand any kind of a chance here and that’s an issue. How can you possibly root for the characters when they’re all so unlikable? The movie makes a lot of mistakes and barely stumbles to the end.

The movie starts with the main characters getting ready to rent out a house for a while. It’s summer and the time for relaxation and adventure. They find a large house that looks like a bit of a fixer upper but the owners are nice enough. They say cryptic stuff about the house looking after itself and that it’ll look good soon but the main characters don’t mind. The place is super cheap, even suspiciously so you could say. Still the owners say that it’s a deal and then vanish. Only one elderly lady will be staying with the family but she never leaves her room so she shouldn’t be much of a bother. Well the characters have their house but they all start acting rather oddly right away. Should they leave before it’s too late?

Now the haunted house genre isn’t anything new. We’ve had haunted houses for as long as I can remember. The real issue with this one is how fast is effects them. Usually it might take a few hours or something for this to go through but instead it’s nearly immediate. Ben goes crazy first as he tries to drown his son Davey but ends up being foiled before it’s too late. Then Marian gets really serious about this house to the point of yelling at Davey about it. Finally the grandmother starts feeling really tired all of the time. The only common element is the house and yet nobody really wants to leave it.

It’s all just way too fast. Do these guys not have a single oz of willpower within them at all? That would have solved this issue right off the bat since they could have escaped. You probably suspect how things will play out right from the jump but that doesn’t mean the series couldn’t have just thrown us a curve ball somewhere along the way. Instead they just get possessed as if this is the ghost busters and are overwhelmed at all times. As a result there is no time to find any of the characters likable since they all seem so unhinged.

Ben never recovers from the opening scene. He probably should have gone to greater lengths to make sure they all left the house. Maybe even burn it down as a last resort. The ending is frustrating in that sense as Marian ignores them all to dash in the house. Honestly at that point you probably just need to keep going. At the very least you need some semblance of reaction times. One thing that hurts Ben at the end is that he’s impossibly slow. Seriously the guy can’t move an inch when it counts and that really comes back to bite him. If he could move an inch then that would have helped him out a bit.

Meanwhile Marian is no better as she is quickly absorbed by the house. She never makes the right decisions as a result and yells at Davey for minor things. She also doesn’t stick up for the grandmother at all and just leaves her feeling underappreciated the whole time. Marian ends up allowing the danger to become real each time she strengthens the house. The grandmother is a little less responsible for the bad things that happen. She at least tries to resist the whole being sleepy thing but the other characters don’t exactly help her out in this. Anyone would have cracked eventually.

Davey is reasonable enough the whole time but probably should have also encouraged them to leave the house after the crazy events kept on happening. By the end, running for the hills would have been best. He’s rather young so he wouldn’t get far but that would have helped a bit to at least escape the immediate area. The only winners here are really the two owners of the house who knew what was going to happen but stayed quiet. They ended up being rather talented masterminds the whole time.

I do enjoy the idea of a house that feeds off of the owners in order to look great every Summer but the characters should have been able to resist a little better. At least make the house work for the victory instead of surrendering immediately and making everything so easy. That’s the worst part of it all, this is incredibly easy for the house. I doubt it even broke a sweat messing with these guys. The visions they get aren’t even that scary. Ben keeps seeing a guy with a cap driving around in a black limo? Okay….not too scary for him.

The context is a bit hard to follow and we have to assume he was being scared because of a previous inhabitant’s feelings but he should be able to overpower that, at least a little. The fact that he couldn’t do anything about it was the worst. Marian never even seemed to try with this either. For what it’s worth, Ben still got a few scenes where he was upset. Marian seemed positively thrilled the entire time. Nothing would dampen her mood at all and she didn’t even stop to think twice about why the phones wouldn’t work for Ben but worked when she grabbed it.

At best I can say that Burnt Offerings did have some decent visuals. I thought it illustrated how the house would visibly change really well. I wonder if they shot images of a different house or had to set everything up with physical props. Either way that was effective and the film does have a rather ominous atmosphere at times. So at the very least this did have that horror feeling and the writing was also decent. It may not have been out of this world but the characters all talked in reasonable ways and I liked this style of writing. It’s not enough to overcome the film’s flaws but at least it’s something.

Overall, Burnt Offerings really skips a whole part of the movie that should have existed where we see the main characters resisting the mansion’s influence. By not having that, it makes it seem like the heroes have no self control. They just joined the darkness immediately. None of them are pro active about changing the situation even though it’s clear that this has all happened after moving into the house. They should have left straight away. By not doing so, it can feel like the film has stalled out at times. Always a risk with a slow burner type like this one. I’d recommend checking out a different Haunted House film instead for a better experience.