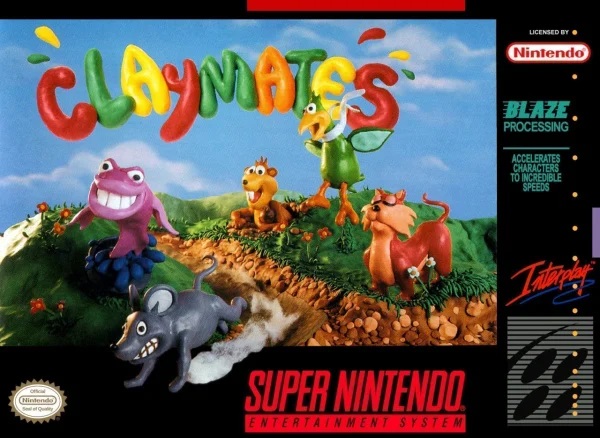 Claymates is the next platformer in line and this one always looked like fun. You get to turn into different animals and run through a variety of levels. Who wouldn’t enjoy that for a while right? Well, it’s a good game but one that is limited by some questionable decisions like a whole bunch of puzzles that you have to play through. Cut those out and this would be even better if you ask me. I guess we do have to roll with it in the end though and it’s still not bad. You should be able to have some fun with this one for a few hours.

The game starts with the main character being turned into clay by the villain who kidnaps his father. The lead must now master his abilities before it’s too late. The gameplay here is your classic 2D adventure as you have to run through and take names. You get to the end of the level and then you’re taken to the hub world where you have to clear a puzzle and then start the next level. There are 4-5 worlds to conquer here and each one has a few levels. It’s not a particularly long game but I would say that some of the levels can be a bit longer than what you might be used to. They aren’t always linear too so sometimes you will have to go backwards.

It’s not one of those games where you can hold right and go all the way until you beat it. You will actually have to change directions at times and the game won’t hold your hand so bring your best. Any big mistakes can definitely cost you some time like some teleporters that take you back to the beginning of the level. Now those are really hard to deal with so make sure you dodge them as best you can. The 10 minute timer for each level is generous but you still want to try and minimize how often you have to go back and replay portions of the level right?

Each animal form has a different attack/ability although all of the offensive moves tend to work the same way. One of them has a projectile instead of a close range attack which is good. The others mainly alternate between bites and scratches so you’ll have the same effect. You can also run really fast in these forms. 9 times out of 10 this will cause you to get hit but it’s still fun to just run all out real quickly. It temporarily feels like a Sonic game that way.

So the gameplay is a lot of fun and I don’t really have any issues there. The platforming parts are handled well and with care. The plot is also pretty good and the cutscenes we do get help to show their personalities better than the titles with no cutscenes. It’s not a lot or anything like that but every bit helps. So that’s taken care of but the biggest tricky thing here are the puzzles between levels. Basically you have to help navigate 2 robots over to the end where they can use a bomb or a hammer to get rid of the obstacles. You can’t move the robots directly so you have to move obstacles to guide them there. At first they are fun enough but as this goes on you end up needing more and more complicated ways to move them which can be a bit tedious.

You’ll make it through eventually but once the puzzles start taking longer than the actual levels you feel like it’s gone too far. It just doesn’t make sense since the main gameplay is presumably why you are here in the first place. Also, I seemed to get caught up in a glitch near the end of the game where one of the cars vanished so I couldn’t use it to manipulate the robots. That felt really cheesy especially since I was so close to the end of the game. Sure, there’s probably a way to fix the glitch like going into an old level and completing it again but I didn’t know that for a fact and wasn’t sure I wanted to go back and replay anything.

So instead I figured that would be where I ended things. At least I did save the father so I ended up beating most of the game. Perhaps it wasn’t 100% but it was close enough. Glitches just take the fight right out of you. I want to assume it’s a fairly rare one though so hopefully you shouldn’t be affected by it if you decide to play the game through. Then you can really enjoy it.

As for the soundtrack and graphics, those are good enough. The game’s got a good amount of energy going for it and you can tell they put some effort here. Visually the game holds up quite well and the music was catchy enough from what I remember. So in the end this is one I could recommend as long as you have the Switch Online. It’s free that way so you may as well right? While the puzzles take away from the fun, the actual levels are crafted well and the length also isn’t bad for the SNES. The transformation gimmick works well. Between Kirby and Jelly Boy it seems like I’ve been running into that a whole lot lately.

Overall, Claymates is an interesting game with a fun premise. A modern remake with some more dialogue and cutscenes would absolutely be a full win if you ask me. Just keep those puzzles out of this and focus on it being a platformer. Let me speed through the levels like I did here but maybe give some opportunities for me to run without being hit. It’s not like Sonic has the exclusive copyright on going fast so lets get this job done. Bring back the big villains and boss fights to make the whole thing feel authentic. We’ll see if the next SNES game can beat this one but ultimately I would say this was still a good title. It gets the job done, glitch or not.