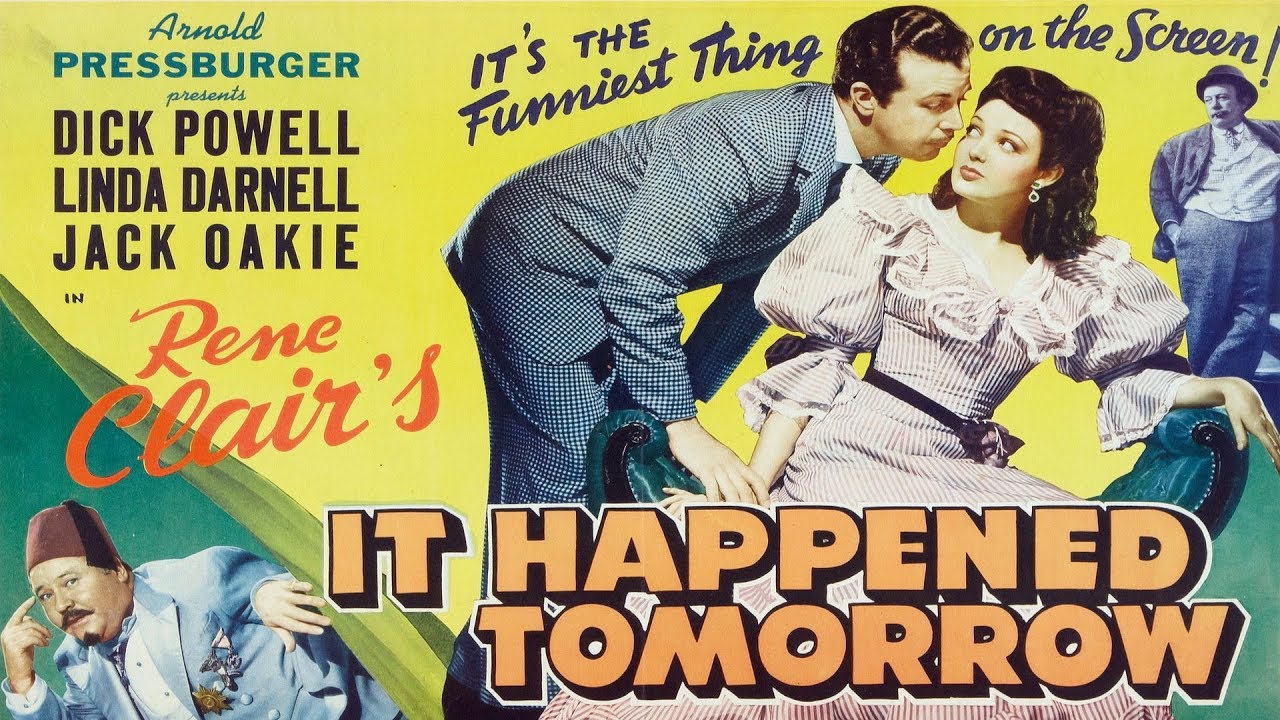 It’s time for a happy film from back in the day that involves a little messing with time. I always like any film that deals with temporal events and this one is no exception. It does tend to mess around with the idea of “The future cannot be changed” which I don’t buy into since the instant you know about the future you can certainly change it….but for now that’s neither here nor there. Either way you should definitely have a good time with this one.

The movie starts out in the future to completely spoil all events in the film by showing that Lawrence and Sylvia are alive. Big mistake if you ask me. We then cut to the past where Lawrence really needs some big news so he can become a big reporter. He starts to wish that he could see into the future and so his old colleague Pop tells him that it may be possible but it would take 10 years off his life. Lawrence doesn’t care, he just wants the future now! So Pop gives him tomorrow’s newspaper which allows him to quickly predict some events that are going to happen. With this in his toolbox you would think that Lawrence is unstoppable but there is one big catch that appears right away. The catch is that the cops think he is some kind of criminal mastermind because he always knows when the crimes are about to happen. Can he clear his name and marry Sylvia or is it all over for him?

Lawrence definitely handled things in a rather sloppy way which is what got him into trouble in the first place. I think if he had just been a little more low key then he could have really used the future to his advantage but he was caught up in the moment. It’s understandable so I won’t really dock points for that. Who wouldn’t be thrilled about suddenly being able to see the future right? Of course the whole 10 years cost thing should ring as a very ominous warning but for some reason Lawrence is never too worried about that.

I was glad that he ran to the race tracks to get rich too since that seems like the best way to use your future powers. Maybe don’t do it as obviously as winning 4 races in a row though. Be subtle and win one at a time or something. Or if you really want to sell this, keep a good mix of winning and losing so that you earn more than you lose but it’s hard to prove that you know the future. It’s absolutely the best way long-term.

Of course this is a comedy so I’m not expecting them to go super in depth on the inner workings of how to use the future tech to stay low-key. He did well with it overall which is what counts. Meanwhile the second half of the film has him being rather subdued the whole time because he learns that he will die soon and believes that the future can’t change. It makes for some fun scenes like when he is attacking a gunman without fear since he figures death is impossible. I thought that was handled exceptionally well. On the other hand, I thought he could have done more to stop the prophecy. He’s going to die at the hotel? Fine, go literally anywhere else!? Go to a faraway restaurant or just keep driving into the distance until the time has passed.

There are a lot of ways you can escape your fate which is why I never buy into the future being in stone. The only way that works is when you don’t know the future in which case it’s all moot since you couldn’t know if it is changing. It definitely makes for a really entertaining premise though and part of what really helps the film excel is how solid the writing is. All of the characters have really solid dialogue and the pacing is definitely on point. There’s no time to get bored here and you will be grinning all the while.

Even the supporting characters are quite solid here like Inspector Mulrooney who is convinced that Lawrence is mixed up in some shady business. It all adds up so I’d definitely be agreeing with him in these circumstances. Sylvia’s dad is also solid as he does his best to protect Sylvia and put an end to Lawrence. I’m surprised he didn’t at least try to shoot Lawrence instead of making peace with him though. Kudos to the guy for respecting Sylvia’s feelings there even if he could have taken Lawrence down for good.

Pop is a nice old guy too even if he’s always vague to the main character. He’s certainly not too helpful with trying to get down to the bottom of things, that’s for sure. His papers are what set everything into motion though so I like to think he was trying to teach Lawrence a moral from the start. Sylvia’s a good heroine here who does her best to help Lawrence out. The romance itself may have been a little rushed so I had a hard time buying into it, but I suppose they all had happy endings.

This is the kind of film where there isn’t a ton to talk about because the plot is ever changing but it’s still a simple story. The positives here are all in the execution like the humor being delivered well and the characters having a lot of fun reactions. All of the fundamentals of the film are on point so you know from the start that this is rather high quality. I certainly had no issues with it and there’s a lot of replay value here.

Overall, It Happened Tomorrow is definitely a solid film that I would recommend to anyone. The whole plot is just very interesting and has enough potential where you could do a lot of films like this. It never really has to end if he can just get more newspapers and you could always pull off sequels or remakes with the same kind of setup. This film has aged really well and so I would definitely recommend checking it out, you certainly won’t be disappointed!