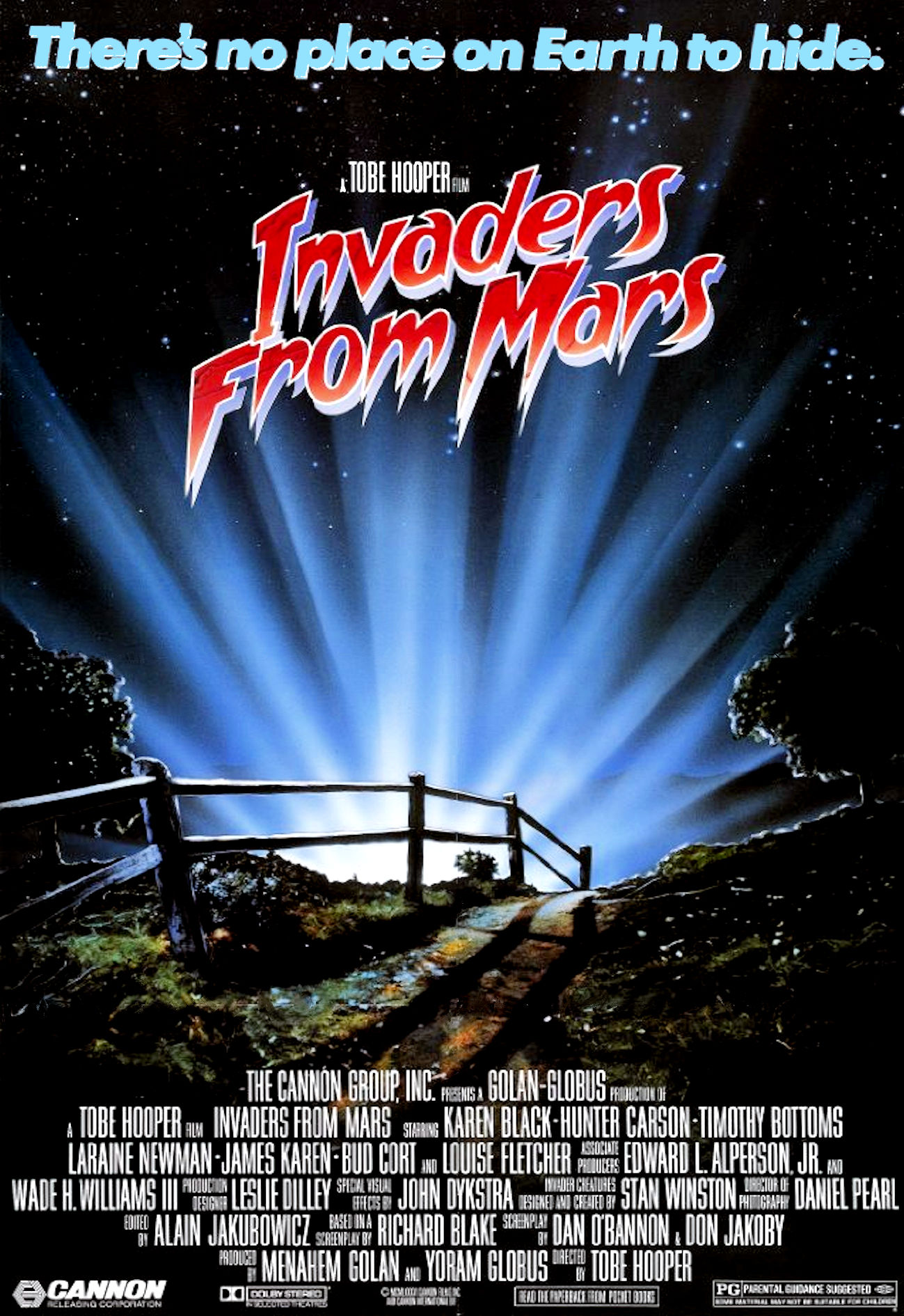 Invaders from Mars has an excellent premise. Who doesn’t like the ideas of aliens showing up to shapeshift into people and change our way of life right? Well, that part was fun but the film is held back a little by the fact that the main character is a little kid so there isn’t much he can do to help. There was quite a bit I liked in this film but also a lot of parts that I thought could have been better. So ultimately I ended up being a little on the fence here but you should have a good time.

The movie starts out with David noticing a spaceship landing in the backyard area one night. He asks his father George to check it out so George does but he is instantly defeated by the alien menace. When he returns he now has a weird injury on the back of his neck and he talks rather robotically. At first David doesn’t realize what is quite wrong here but George is so over the top suspicious that the pieces begin to come together. The issue is that at school this has already started to spread as more of the kid and teachers are taken in. How can David get his family back before it’s too late?

David really blows it right from the jump though. So early on after he figures out that something has happened to the Dad, George goes missing for a long while. David’s mother is worried and David somehow doesn’t suggest that they check the backyard area. He knows that is exactly where the ship is and how George had been so suspicious about it the whole time. Why not check that area out? If David was scared about it being a trap then he should have told her that. Instead he just watches as they head over there and she is naturally taken out as well. George did not help one bit.

Meanwhile at school you have the nice nurse Linda who hasn’t been taken over yet. The story is rather fantastic but she starts to believe it because the aliens are just that obvious about it. They turn all skeptics into believers with how unconvincing they are. So Linda makes the smart move…she gets the government involved. Now I have to pause here to say that I was shocked at how big the government’s role was here but in a very good way. This was absolutely the right approach to dealing with the aliens.

The army is also portrayed very competently. At one point the aliens impersonate some army members and try to assassinate the general but his right hand man knocks the guns out from their hands and takes them out. It was highly impressive and that’s when I knew that these guys weren’t playing around. If they had taken over the film entirely from David and Linda I would not have minded at all. This was the best part of the film and it even became more of a classic action story.

We get good fights and action scenes all around. Additionally, the effects have aged rather well. The aliens look interesting at least and their base of operations was also intense. Now the aliens may not be very smart as I mentioned how they tend to be responsible for all of the sticky situations that they find themselves in but at least they have character. They definitely take things quite personally and while they seem emotionless at first, that facade falls through right away.

I could have done without the scene of one of the aliens eating a frog though. They controlled the mean teacher right away and so this leads to her always chasing David around but where does the frog come in? Do they just eat frogs as a general species rule or was this just for kicks? Either way it was a rather odd scene to include. The aliens don’t even know how to properly drink coffee so George spills a lot at the beginning. Personally, if they’re this sloppy as actors then they just should have gang rushed the town and abducted everybody. It would probably have had better results than waiting the whole time.

In the end, the only likable character here was Linda aside from all of the government guys who were a lot of fun. I never warmed up to David and I can’t say that the parents looked great with how easily they were taken out. We see the alien base later on after all so we know what the aliens are capable of and I like to think that the parents should have at least been able to yell for help or something and make a big commotion. Perhaps they were sneak attacked each time but it’s still not a good look on their end with how David was able to escape the whole time.

Now as to the ending, I was less than pleased with how it went. Of course I love a twist ending and a cliffhanger. If you do either of those things then you have probably ended in the right way but the big issue here is that it’s not a super interesting ending. I think it would have needed to show you a little more in order to get hooked. Personally I like the idea of David being stuck in a time loop of ever changing events sort of like the Terminator series. The overall premise is the same but the way things happen will be different each time. It would explain a bit but not how the aliens are such good actors now. A sequel could have capitalized on this and in retrospect would have made the ending better. Otherwise I think a different cliffhanger would have worked better.

Overall, I would have liked a different main character but Invaders from Mars is still a solid film. The writing is on point and the pacing is pretty good. It’s got a good sci-fi angle going and I like the idea of the aliens gradually taking over the town one person at a time. The execution just wasn’t as good as it could have been and I don’t think there would be a lot of replay value here. Still, if you’re up for watching an alien film then you could do worse than this one and you will get to see why you should always voice your concerns about aliens flying in from Mars because if you wait then it may be too late.