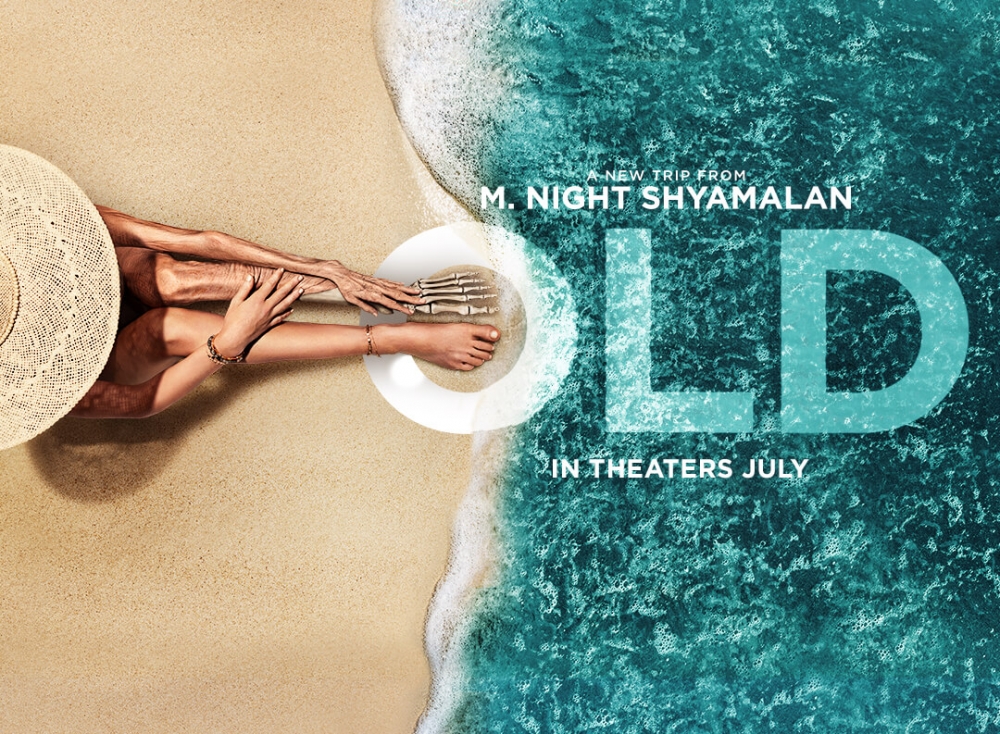 Old is a movie that certainly got a lot of promotion. You always figure it should have some kind of a twist since the producer is known for that and the very premise goes hand in hand with having a good twist in there. There are some mysteries and it’s all very interesting but it fumbles the ball quickly. The characters are unlikable and the film explores a lot of the things you’d rather not see in quick aging instead of more interesting ideas. As a result it ultimately starts to drag and just really messed up here.

So the main characters Guy and Prisca have been having a lot of relationship issues lately. Their marriage is pretty much at an end so they’re just going to do this one last vacation and then call it quits. Well, their kids are excited for this at least and it seems like it should be fun. The place has complementary drinks and the whole thing is very high-end. They’re even invited to a private beach with a few other select guests but that’s when things get tricky. It doesn’t seem like there is a way to leave the Beach and they all start to grow older so time is limited here.

Naturally the hook is on seeing how the characters grow old and what they do about it. It’s a solid hook but you absolutely need something more than that if you’re going to make this a very memorable experience. This film opted to do that with character drama as they inevitably start turning on each other and everyone goes crazy. It’s not out of nowhere as the film does set up some legitimate reasons for why this group is so crazy but it doesn’t help take away from the fact that it’s annoying.

In a life or death situation the last thing you want is for everyone to start cracking right out of the gate. Of course a film may need some drama but I dare say that it would be executed better without this angle. Seeing the characters team up and keep on trying new things would absolutely have a much better effect. This way the characters are still likable and you’ve still got some drama as each attempt wouldn’t work which would put them in a tougher position. These are just some ideas off the top of my head that I think would have done a whole lot of good here.

Guy and Prisca start off on a rather rocky note and it doesn’t get much better for them for most of the film. Particularly once we find out why their relationship is in tatters. They put this aside to help the kids which is good but at no point are they all that likable. Then you have the kids Maddox and Trent. Maddox is okay but Trent definitely looks really bad here as he decides this is the best time to mess around. You’d think that he would hold off on doing anything crazy when all of this is going on but I guess not. I’ll throw blame onto Kara as well here as it takes two to tango.

It was a bad moment that also leads to a completely unnecessary scene as the gang have to work on helping Kara give birth on this island. Really now? You can probably guess that with the whole aging thing this doesn’t go over very well. Then you’ve also got a live surgery operation that has to go on and you quickly realize that the film is really trying for max shock value here. There’s a lot of interesting ideas you can do about being trapped on a beach with time moving so quickly like this but surgery and giving birth aren’t two items I would put on the list there.

Then with the characters going crazy it’s not like there’s many opportunities to team up either. So Charles is a surgeon but he was already losing his mind and this just made things worse for all of them. He ends up being the biggest obstacle here and on a small beach like this, having just one person against you can be absolutely deadly. The guy runs around with a knife trying to attack the others almost from the jump. Right when he appears you know something’s off and it just gradually gets worse and worse throughout the film.

His wife Chrystal at least seemed reasonable. Perhaps a bit stuck up but she wasn’t losing her marbles the way the others did. Unfortunately almost nobody is safe by the end so eventually she went looney as well. Agnes and Sedan didn’t really have a chance to crack. Patricia was in a really tough spot from the start so the whole time gimmick was going to get to her. For Jarin I thought his plan to swim wasn’t very well thought out. It’s a shame since he seemed like one of the most reasonable members by far.

In fact, he has the best idea early on and it was disappointing that nobody tried it. So this whole time you may be wondering why the heroes don’t just walk off of the beach right? Well, every time they walk to the exit they get dizzy and then end up fainting. The characters figure this is because of how time moves so quickly here that their bodies need time to adjust almost like when swimming deep underwater. So Jarin figures that maybe this won’t be an issue if they go really slowly.

That makes a lot of sense and I think it would have worked. Now, would it have actually resulted in a happy ending for all of them? Eh, probably not since getting out of the beach isn’t necessarily a win condition here. They’d probably still lose but from their perspective I think it is absolutely worth it and something they should have tried for. It would take a lot of time but still would have easily been the best chance of success.

Without saying what the twist is this time, I can say that it does make sense. It’s a bit more on the low key side so it’s nothing crazy but at least it does work which is the important thing. It’s a reasonable ending all things considered and at least isn’t super dreary or anything. The characters actually played it smart in the climax this time which was nice. If they had made any big mistakes or something then that would have been annoying.

Overall, Old is not a film I would recommend. The concept behind the island and the mystery is definitely interesting but it goes all “Lord of the Flies” way too quickly. Mix that in with just trying to be gritty for no reason and you lose a lot of the atmosphere that this film could have generated naturally. There’s just so much potential and promise that you can do with this kind of film and ultimately it just wasn’t there. This is a movie that you will definitely want to skip out on.