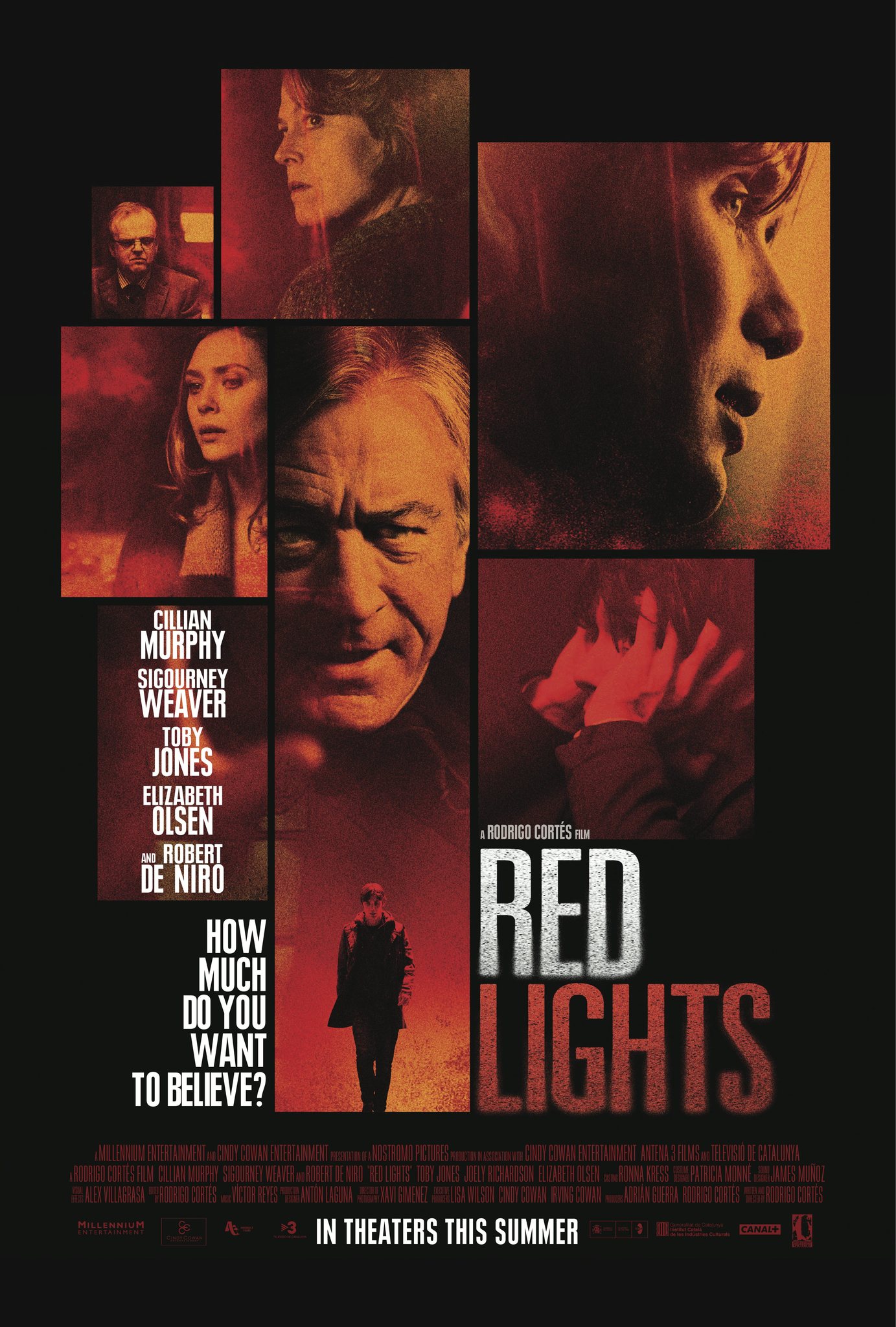 Red Lights is a bit of a trippy film that has a lot of good ideas but the execution isn’t as good as it should have been. It gives you a lot to think about though and I like the concept. You’d probably never guess the actual story of the film just based on the title though, it’s not one of those titles that makes it obvious or anything. There aren’t a ton of magic films like this one out there either so that adds a little more reason to check this one out.

The movie starts off by introducing us to Margaret and her assistant Tom. Their job is to discredit people who call themselves magicians by uncovering their tips and tricks. They’re quite good at this and Margaret really commands the field. In her day she was only defeated once by the magician known as Simon who was the best of the best. He retired rather suddenly when one of his critics died during a performance. Well, now he’s back but for some reason Margaret refuses to go after him. She even tells Tom not to try because they are hopelessly outmatched and outgunned. Tom doesn’t listen though and wants to take this guy down as the ultimate triumph.

Red Lights shifts gears rather quickly so don’t expect this plot to remain static but right off the bat I like the premise here. The idea of a movie about people busting magicians is really interesting. Particularly if you don’t believe in magic then you’re rooting for them to claim the win. Margaret is also a very solid character with how confident and prepared she is. Of course she isn’t unbeatable and we get a flashback showing how she lost to Simon. It’s not easy to prove the others are a phony, particularly on the spot. Part of her regret though is that it should have been easy for her in that moment.

He claimed that her son’s ghost was around as if he was dead, but only Margaret knew that he was still alive. If she had called him out there then her career would have been perfect but ultimately she hesitated and just didn’t think of it in time. That’s her only loss in the film though. While Tom gives her a hard time during an interview later on, I wouldn’t say that she was actually losing that one. Personally I thought she did fine and I suppose it’s how you look at the interview but what did he really want her to say? I thought he was unreasonable the whole time.

That’s one of the weaker parts of the film since Tom is really the main character here and he’s just annoying all the time. He constantly loses his cool and falls into every trap imaginable. There’s a scene where he keeps on threatening the head researcher so that he can get in and the whole time I’m just thinking that they really shouldn’t let him in now. It’s clear that the guy isn’t stable at all and the film really goes out of its way to show this. He’s just way too obsessed with Silver.

Tom also just isn’t as talented as Margaret is. Intensity and youth can only get you so far, ultimately you also need the technique to go along with that. He’s also rather mean to one of the assistants. He doesn’t even let the guy talk and just keeps on brushing off the guy’s ideas. Tom’s girlfriend acts the same way towards the guy so you start to feel bad for him. He’s the one trying to help out and staying up late trying to crack the case too. He deserves a little more respect there.

During the film you’re also supposed to ask yourself the whole time if Simon’s powers are real as well. It’s a nice angle to the film since it gives you a reason to really think about each scene a lot. Fantastical things do seem to happen a lot when he’s on stage like lights breaking or people dying for seemingly no reason. Of course part of you will think that may be a little too easy in that case. Either way it should give you a lot to think about and Simon makes for a solid villain. He’s definitely not someone that the characters can really afford to take too lightly.

There is a big twist near the end of the film which answers all of the questions and should make or break the experience for you. The twist itself I’m fairly cool with although I wouldn’t say it’s handled super well. One scene is dragged out a bit too much which lowers the impact of the moment. I also feel like this raises some extra questions throughout the movie which don’t do it any favors. It also leads to a rather bad ending so in the end the film starts off a lot better than it ended. It had some good humor and a fun cast but it just made some really big mistakes in the second half that erase a lot of the good that the first half pulled in. I’ll jump into that now so skip the next two paragraphs if you haven’t seen the film yet.

All right so here we go into spoiler land. First off, Margaret gets bumped off early on which is a shame since she was the best character here. Tom isn’t able to fill in for her effectively at all. Then the other big twist is that Simon was a phony but Tom is a real psychic. Yes, all the crazy stuff that happened during the movie was his doing. It seems like he didn’t actually know he was doing this to himself. Towards the end of the film he says he regrets how he didn’t tell Margaret sooner so she could have some closure though.

So that means he knew he had powers but just didn’t know he was using it at those moments? It’s rather sloppy. His whole motivation seemed to be to find some other people like him with psychic powers and he had started giving up on this dream. It’s too bad he couldn’t have confided in her though or at least been less desperate about things. At least the movie didn’t cop out with powers not existing but it just should have been so much better. Also, at the end Tom takes Margaret’s son off of life support so he can die now but that was a very iffy way of ending things. He snuck in there without any consent and just turned it off? Even if it’s meant to be a helpful/hopeful kind of thing, it didn’t turn out that way.

Well that’s it for the spoilers. There’s also an action scene we get in the bathroom that really doesn’t go very well for Tom. The scene is super random and shows up out of nowhere though. On a plot level you get to piece it together real quick on how this happened but the ending of the fight felt really convenient. If you’re going to start a fight and take a huge risk on someone seeing you, then shouldn’t you make sure that the fight is won? Stopping at the end just doesn’t work and makes the whole thing futile.

Overall, Red Lights is a film with a lot of ups and downs for me. The concept is sound and there are some interesting visuals here. On the other hand the ending is no good and it felt like the movie should have trusted its own premise more. The more interesting scenes in the film where about the heroes trying to prove that the magicians are a fraud as opposed to Tom’s obsession. If we focused on that then this would have been pretty good.