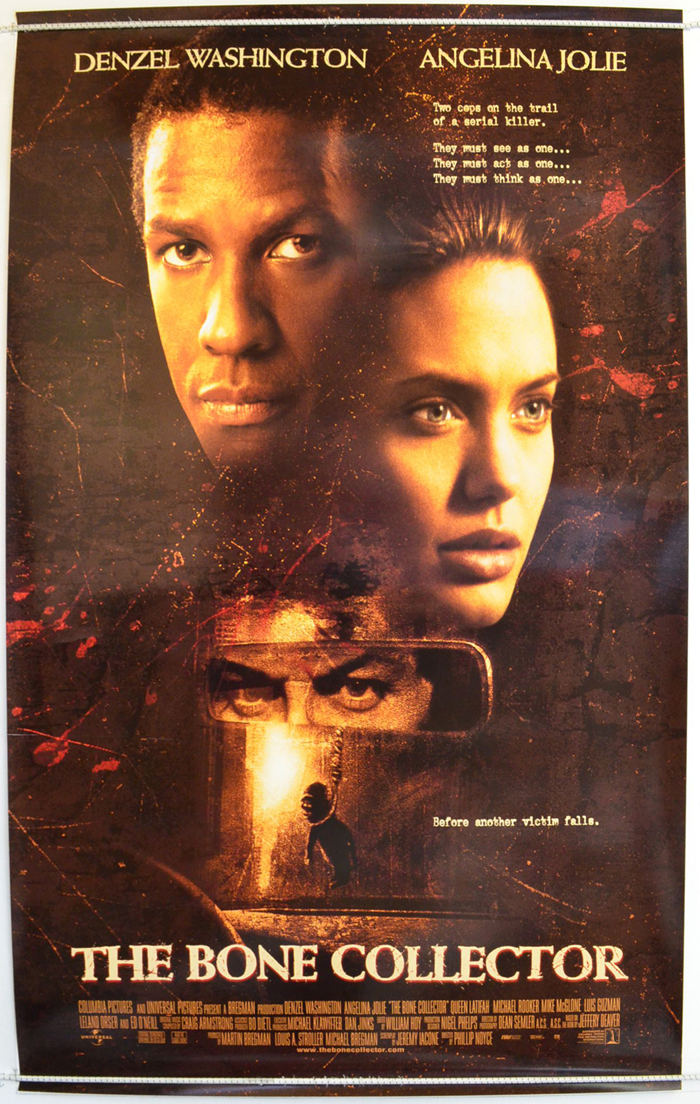 The Bone Collector is a film where you have a gut feeling that it won’t be very good from the jump. Films about solving mass murders can be interesting when they focus on the detective work of course but usually when it’s about one still in progress it can be shaky since the guy is still out there bumping everyone off in every other scene. This movie stays rather gritty throughout the film and never ultimately gets past that.

The movie starts off by introducing us to Lincoln who is in a rather tough state. He suffers from seizures and can no longer walk or move around. He is permanently trapped to his bed and so he has decided to end it all. Lincoln fears that another stroke could send him to a vegetative state and so he wants to end on his own terms but right before it’s time for that operation, a mass murderer appears and Lincoln may be the only one who can stop this guy. It’s hard to say what his motive is, but he’s going around murdering people in disturbing ways. Lincoln will have to solve this case quick and so he requests that the new agent Amelia be brought onto the case.

Naturally it’s a little irregular to be bringing someone new onto the front lines for a big case like this but Lincoln liked the way that she handled the crime scene. Throughout the movie there is a little tension with the other cops as the main boss in particular resents this. Ultimately Lincoln and Amelia are the two people best equipped to handle this though. Amelia will have to tackle darker parts of the job than she ever intended to though and may need to rethink her career path after this. Either way this will not be easy.

Making Lincoln unable to move is something that from the jump seemed to be added so you could be worried for when the villain finds him. I think that’s the entire point of the plot since it’s inevitable that they would come face to face but of course there would be no way for Lincoln to fight him. We do actually get a struggle at one point but it’s hard to buy into any of it playing out the way that it did. Remember that Lincoln can barely move at all so the villain really has to drop his guard for this to be an even fight.

It ends up being a rather gritty battle for sure and not a climax fight that ends the film on a great note. You definitely do feel bad for Lincoln the whole time though because that’s a really rough situation to be in. Apparently there is no cure for him and also no way to predict when the seizures will occur so in a way he’s always forced to live in fear. It’s hard to imagine going through the day like that and he did well to still stay focused and help out in the mission.

As for Amelia, she’s a solid main heroine. Naturally there are times when this gets to be a bit much for her since she has never had to deal with a big murder case like this before but it’s always understandable. Lincoln asks a whole lot out of her and while it’s because he believes in her potential, you don’t blame her for walking out several times. This is really not what she signed up for in the slightest.

The cast is fairly small though because there aren’t many other big characters here. You have the police chief who shows up to try and get in everybody’s way but there’s not much to him beyond that. You have Lincoln’s nurse Thelma who does a good job of watching over him. She does her best to keep the atmosphere light and prevent Lincoln from making any big mistakes. Then you’ve got the villain but he is hidden for almost the whole film. He’s just your average murderer though and there’s not a whole lot to his character when he does pop up.

Ultimately what holds this film back is that it just goes out of its way to be really dark the whole time. I wouldn’t even call it super violent although it certainly has its moments but the film makes sure that everything happens in the most disturbing ways possible. Nobody actually gets an ordinary death here, there’s always got to be a whole production around it. Sometimes keeping it simple is just the better way to go about it.

There also isn’t time for almost any happy scenes throughout the film either. It’s always very dreary and depressing in part because even when the heroes are not talking about the case they’re thinking about Lincoln and the fate he has chosen. There’s definitely a lot to digest there for the characters and at the same time it’s hard for them to tell him not to go through with the operation because they don’t really know what it’s like to live like that. The film at least has a happy ending though. For a while there you’re really not sure how that’s all going to play out. These films don’t always end on a nice note like that.

Overall, The Bone Collector is a film that you definitely want to stay far away from. There aren’t a lot of good things to say about it and I would struggle to find some serious reasons to actually recommend it to someone. You can definitely find better thrillers and mystery films if you really try. Titles that would absolutely destroy this one and so there’s no reason to check this title out. I could see a film about archaeologists collecting bones to have some potential though. Maybe it could have some Indiana Jones type traps or something.