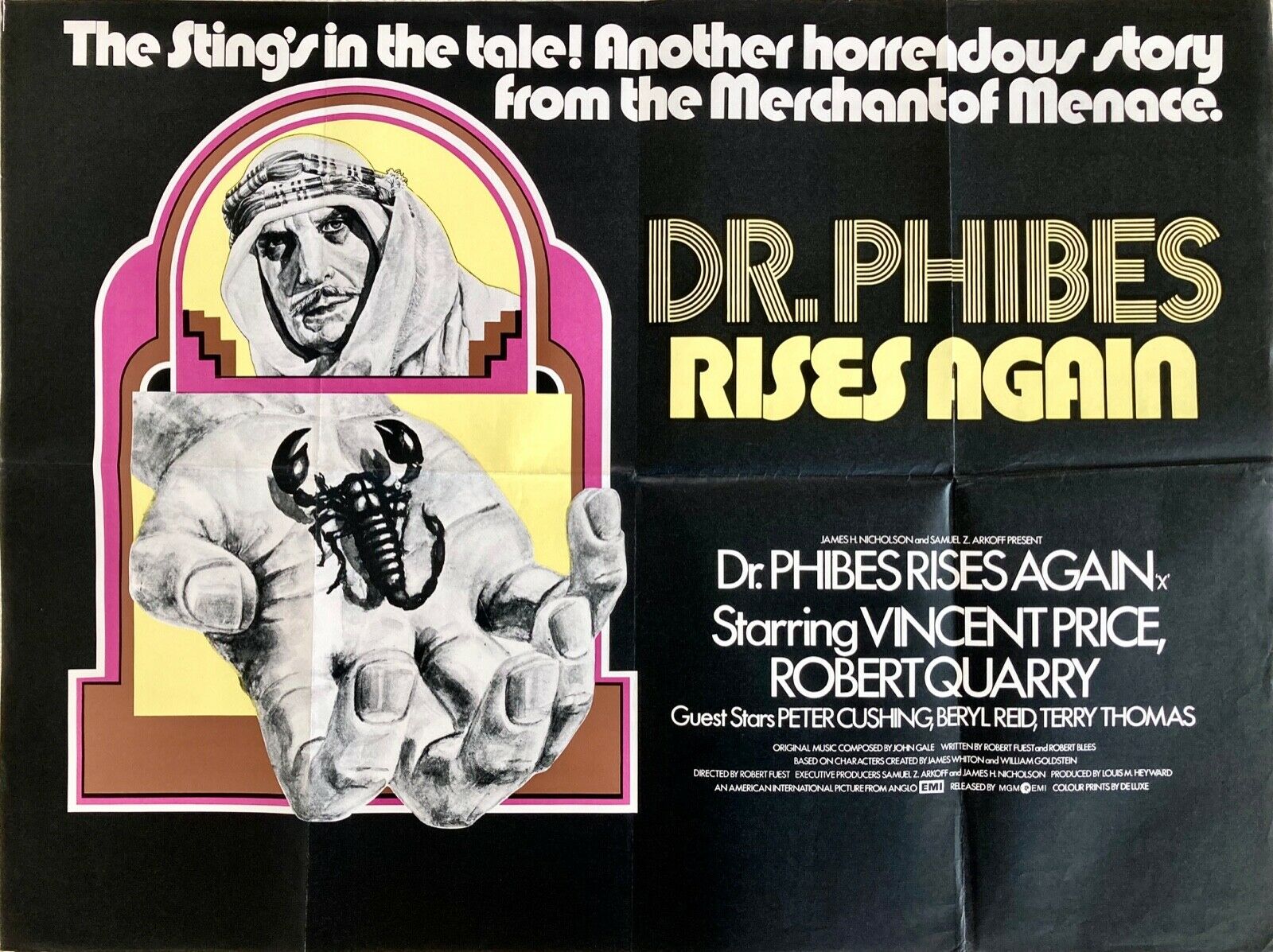 It’s time for Phibes to return once more to try and claim his victims. This film is fairly similar to the first. It starts off a little more traditional as one of those horror titles with a lot of quality dialogue and for a minute there I thought this one was going to shatter the original. Then Phibes actually shows up and this quickly becomes more of the same as the first. If push came to shove I would probably give this one the slight edge over the original but by no means is there a big gap or anything. They are very close to each other.

So of course last time Phibes sealed himself away but it turns out that he actually had a grand master plan all along. A mechanism automatically freed him after a certain amount of time and now he is free to start the murders again. His sidekick Vulnavia is back from the dead somehow but that isn’t really explored. She even feels like a completely different character as she seems to possibly like Phibes now but that’s really a doomed goal from the start since the whole point of his quest is revenge for his wife. He’s not going for the rebound now.

The main character this time is Biederbeck who is working in Egypt to find the river of life. He’s got a good start by grabbing the papyrus and all but now this has put him in the way of Phibes. Phibes will be arriving to take this back since he needs it to possibly bring his wife back. Biederbeck knows that someone dangerous is after him but doesn’t care. He knows that the prize at the end of the tunnel is all his and that’s all that he cares about. I appreciate how tough the guy acts at all times but he never seems to be all that smart in thinking about the big picture. Will Trout be able to keep Biederbeck alive or is this game over?

You can see the dark humor elements a bit more here though like in some of the murders. For example, at one point the villain starts to crush someone in one of those traps where the walls are closing in. As he yells for help, Phibes pulls out a giant fan out of nowhere and turns it on which makes everyone think a storm is brewing. As a result nobody gets up to help the poor guy and he is taken down for the count. The whole thing is rather tragic but there just isn’t anything Trout can do for him.

So you have Trout and his partner laughing about the storm and having comic relief scenes while this guy is taken out. So that was at least one effective use of the dark humor. For the most part I would say the other murders are still on the serious side though and it plays out very similarly to the first film. If you liked the first film then you’ll probably like this one and vice versa. The plot may be different but the story and characters are basically the same either way.

I would say Biederbeck probably isn’t as good as the lead in the first film. It’s close and there are some qualities of his that I appreciate more like not being afraid of Phibes but ultimately you know that he won’t be able to back up the tough talk. Diana was a solid heroine who certainly did her best to talk him down at times, but he just wouldn’t hear of it. Trout is still a fun comic relief character. He’s completely helpless the whole time even though he talks as if he is in control.

By this point the government does realize that Trout’s not doing so great but there just aren’t a lot of other people for the job. Trout’s sidekick gets a little more to do here but it’s not like he’s any more effective than Trout so that’s barely even a consolation by this point. Both of them will ultimately just be standing around while Phibes takes everyone out. That’s really all that they can do.

Because of how direct the film is, there isn’t a ton to say about this one. The first movie had more discussion points like the whole plague theme and everything. This one is just more by the numbers as he goes around bumping everyone off but in a very uninspired way. He’s taking everyone out effectively for sure, but it’s not like there is a big gimmick or anything this time around. To me the most memorable scene is still when he just pulled a giant fan out of nowhere to simulate tornadoes. It’s easy to forget but this guy was a genius after all so it makes sense that he could do stuff like this.

Perhaps leaning into that angle a bit more could have done the film some good. Have his murders all be related to really high tech items that he has created. The more odd and outlandish the better if you ask me. Pull that off and everything will really fall into place. Not sure if that would have actually made this film take the leap all the way towards being a good film but it could have at least given it a little boost. Something to help you remember the film and to differentiate it from the rest.

Overall, This is a sequel that isn’t exactly changing the game in any way. You can really skip it and you won’t miss anything and if you liked the original film then you may as well check it out. I really doubt that you will be remembering it for very long. It’s just not particularly memorable like that so it’ll become a vague memory before long. Maybe one day they’ll make a third film but I feel like this is the kind of movie that almost nobody remembers and for good reason. Horror titles like this were a dime a dozen back then and many more memorable ones have come out over the years.