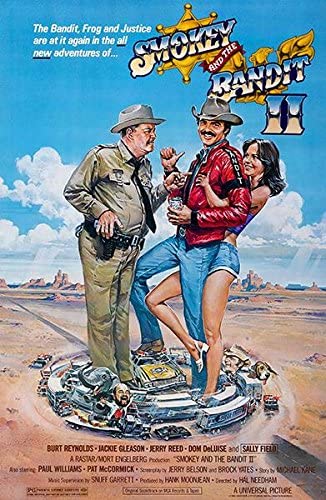 Now it’s time for the big sequel. Smokey and the Bandit II retreads a lot of ground from the first film but tends to do it in a weaker way on all fronts. Right off the bat I can say that this is still a good movie but it’s a step below the first. In no way does it surpass the original and that’s a shame because a sequel should always strive to do better…to be better! This one doesn’t quite accomplish that in the end.

The story starts with Snowman being recruited once again to help with some smuggling. He’s forced to call in his pal Bandit, but the guy has let himself go ever since Frog broke up with him. He’s gained a ton of weight and just doesn’t have any energy anymore so Snowman calls her back in too which causes her to walk out on her wedding to Junior. Once again that sets off Smokey who decides to take Bandit down. Frog and Bandit will have to put aside their personal feelings to get the job done as there is a lot of money at stake here. Will they be able to pull it off or is this game over?

Right off the bat it’s a rather odd decision to have Frog and Bandit be broken up only to reunite them right away as she runs out of the wedding. Immediately you know how the film is going to spin this but now the romance works even less than it did the first time. Bandit now knows that she was absolutely going to marry someone else just a few minutes ago so how much does she actually love him? Then she reveals that he was cheating on her even while they were together which makes sense with how he is acting all the time. They have so much dirt on each other that the romance can’t possibly start up again and yet it does. This is a complete rebound which is a bad idea.

In general the script isn’t quite as tight this time either. The characters are a bit more exaggerated this time. For example Smokey is now shown as being completely incompetent. He’s scared of other truck drivers and no longer intimidates anyone. While he would usually watch the other cops crash and burn in the first film, he’s the one crashing in this one. It’s just way too much of a role reversal the whole time. The film is trying to have him be the funny character without building up his talents without it. It completely missed the point of the original which is a shame.

Smokey is still fun of course but he’s just not nearly as imposing or effective. The characters don’t fear him at all and that’s a shame because it’s part of what made him such a good character. Instead the gag of him constantly insulting Junior is played up even more here and Junior is even less intelligent than usual. You can’t see how Frog was even close to marrying him unless he is just really rich or something. That wouldn’t be a good look for Frog regardless.

As for Bandit, man he has really fallen off since the first film. He’s not the big leader that he used to be now as he got all depressed so quickly. It takes a lot for him to finally get back in shape and ready for action. Then even after that he seems a little more petty than usual like how he blows up at someone for not being a big fan of his. You just didn’t think that something like that would bother him nearly as much as it does. Bandit wasn’t out for the fame, but the thrill of the hunt right?

Snowman also doesn’t get to do a whole lot even though he’s the lead. It’s a little hard to even say what his personality is here. I guess he’s just a nice guy who is ready for some action but for the most part he’s going through the motions. Now you may be wondering at this point, how is this still a good movie? Well, to a large part I’m comparing it to the first movie a lot and of course it doesn’t compare favorably but if you look at the movie on its own then it’s still good.

For one thing, the soundtrack is still solid here. Smokey still has his big moments with his iconic theme song playing. That’s always fun to hear and the chase scenes are still good. They may not be as dynamic as the first film’s but they’re good enough. The comedy is still solid even if less of the jokes land. I feel like the film was also trying to be more family friendly which explains why the humor was a lot goofier. Not sure if that was the intent but that makes sense to me at least.

The movie still has good pacing and you won’t get bored. The slowest part has to be the opening as you just want Bandit to be ready for action already. Once he is then the race is on. The film doesn’t focus as much on the dangers of smuggling this time as it’s all easy for the leads now but I guess in the back of your mind you can assume that it’s still a tough bet for them. I think we should have gotten to see more of the big race for governor since the petty squabbles there had some potential. Unfortunately that pretty much vanishes after the opening scene instead of being a whole big deal.

While the movie doesn’t excel, I also wouldn’t say it has any seriously bad points. Reusing so many plots from the original is certainly something that it shouldn’t be doing but that is what limits it from being better as opposed to striking it down. Ultimately I would recommend checking this film out to anyone who likes a good comedy. In a way it might work better to start with this one and then go back so you end with the higher note and then treat it like a prequel.

Overall, Smokey and the Bandit II didn’t really know what it wanted to do. The film was less focused and borrowed a lot from the original. Still, it wasn’t bad and I would say it worked well enough on its own merits. It may have less replay value than the first but you’ll still have a good time here. Expect to have less laughs but you’ll be engaged all the way through. We’ll see how the third film is able to compete with the first two, or even if it can compete with them at all. It may end up just being a sound loss for the movie but hopefully it can surpass its limits and even be the best one.