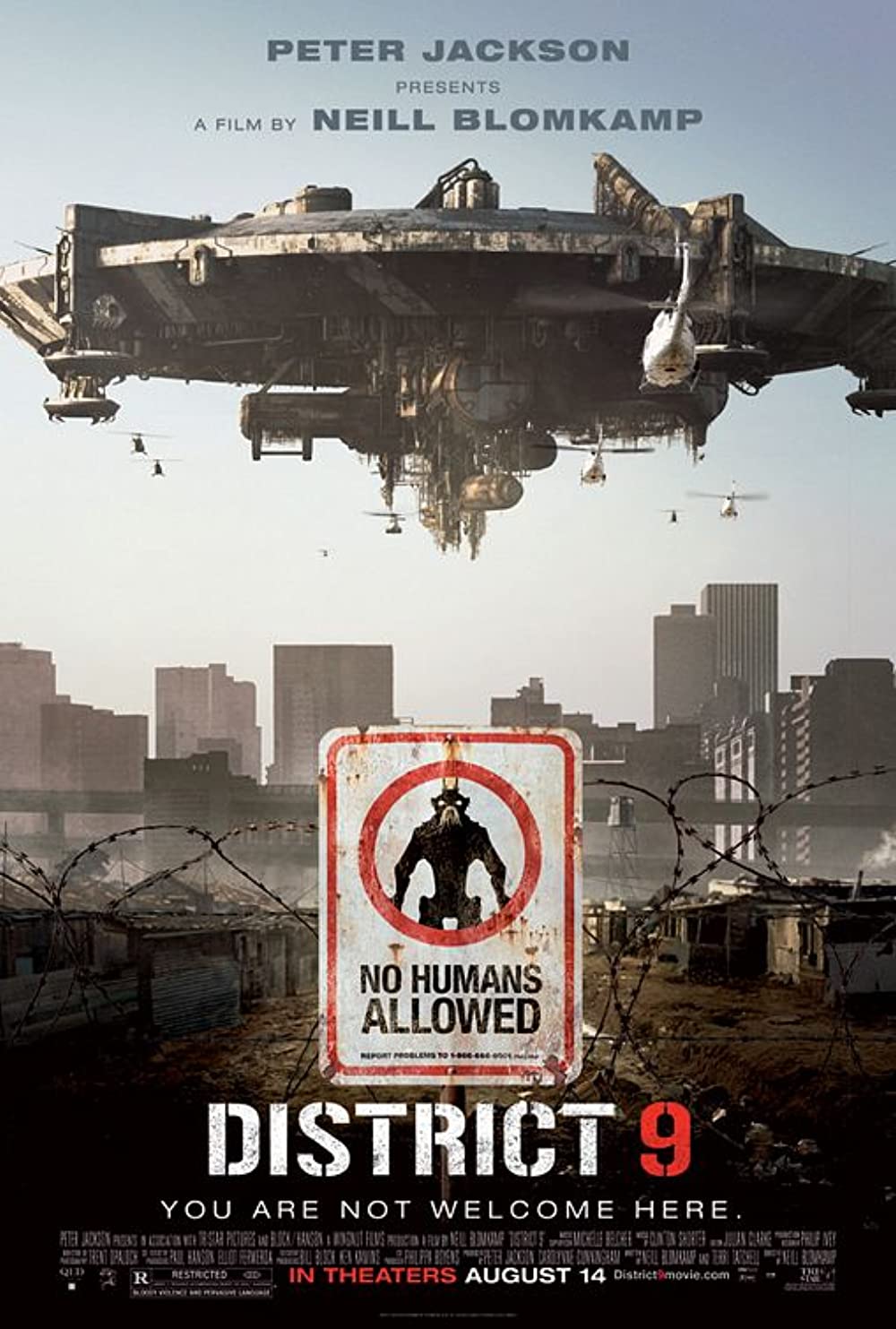 District 9 is one of those films that really did not live up to expectations. It’s not a big alien invasion film or a cool thriller with a lot of action scenes and explosions. Instead it’s going for a more “realistic” kind of vibe as humanity lets the aliens live in one district while running inhumane experiments on them the whole time. This movie is all about the grit and extra details while never allowing any of the characters to look all that heroic. It’s not a great look for humanity.

The movie starts with an alien ship appearing but for a while nothing happens. So the humans eventually cut themselves in and we see that the aliens are all very sick and can’t really fight at this point. So they are moved to Earth in a rather poor district and the humans who lived around there are not happy at all. The aliens have their own language which is translated in the subs and the humans can try to learn it to an extent. Wikus is one of the main guys going around handing out the eviction notices to some of these aliens so that they can be transported somewhere else. One of these operations goes wrong though as he it contaminated by a tube that one of the aliens was using and now Wikus is slowly turning into an alien. Humanity can’t allow an alien to be alive without advanced study so now everyone is hunting Wikus down to experiment with him until he dies from it all. Can Wikus escape?

The idea is that Wikus is effectively a fugitive on his own planet now. There is no real escape to be had so he has to try and fend for himself. At least for a while, eventually he meets up with Christopher again, one of the aliens. Christopher can cure Wikus if they can get off of the planet somehow in the spaceship and to do that they’re going to need a lot of fuel. At this point the humans can’t be reasoned with so Wikus is really on his own.

From the jump the movie doesn’t really give you any real likable characters to root for. Wikus is not the nicest guy to say the least and until he’s turned into an alien, he’s only marginally better than the other humans with how he interacts with the aliens. He grins gleefully as he destroys their babies and is having a lot of fun while this is serious business for the aliens. It’s all too late to feel sorry for him once he’s an alien and the film could have used a bit more nuance with the human characters. Make some of them a little nicer at least right?

Likewise I can’t say that the alien designs are all that good. Part of the point of the movie is that they’re all banged up and not exactly in fighting shape but that doesn’t make for an effective design. If anything you just feel like this is another aspect where the film dropped the ball because some nice visuals would have gone a long way. There is just nothing very nice to look at, the slums are breaking down and everything is rather desolate.

You have characters puking, you see cannibals eating aliens, and there is always a moment of shock value right around the corner. The movie paints a rather grim picture on the current state of affairs for everything and did I mention that this is documentary style? So you don’t even have great camera work because it’s always using the shaky cam style. I use the word shaky loosely as it’s filmed like a real documentary so they’re holding onto the camera tightly but a more traditional style would have greatly benefited the film.

A cynical film about how the government will always be messing with aliens behind the scenes can work well enough if you have one of the aliens as the main character and he is determined to save his comrades or something like that or it’s a big action movie where there’s a lot of fighting but otherwise the movie will just come across as rather mean spirited. The whole film is filled with extra details that you don’t need to know while also making sure that there is never any hope for the characters at any point in time. Certainly a big miss.

There’s just nothing particularly good to say about the movie. It doesn’t have good visuals, an impressive soundtrack, good characters, a solid story, or any fun moments that would make you cheer or laugh. It’s just a film that is determined to be as somber and depressing as possible. Now I do have some ways to fix it even while keeping to the same approach. If you want a film with a dialogue about how humans would treat aliens then you have to ditch the documentary style. We need a character who works for the news, someone in the resistance, and then the army characters from this title.

Give us some debates, some back and forth and different perspectives. The only way a film like this works is if there can be some meaningful dialogue and also a scenery shift so we can at least have some scenes with a happier touch. That would absolutely be the best way to handle this and it would really do wonders for the movie. You can also remove a lot of the grim dark scenes like the tortures and just blowing up aliens for no reason. Lets not make this so over the top.

Overall, Alas, this is not a winning film either way. I’d recommend just about any other alien film over this one. It’s certainly trying to do something new and different which can be applauded but ultimately it didn’t work. Sometimes being experimental doesn’t pay off even if that doesn’t mean that you should abandon being unique all together. It’s all about trial and error and eventually it could pay off. That said, I’d rather we not do a sequel to this film and focus on a reboot that is quite different instead.