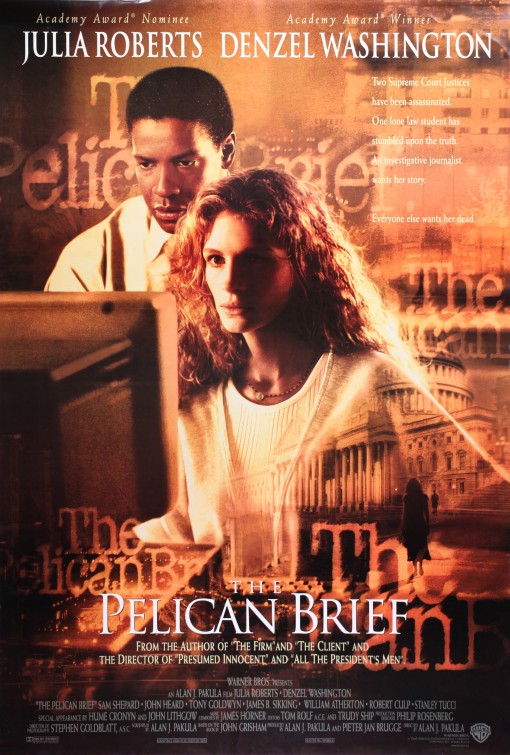 It’s time for a movie about a full government conspiracy. This one goes very deep into the inner government and so the characters can’t be safe anywhere. Conspiracy films can be a lot of fun with how you can’t really trust anyone but have to be able to use people to get your message across. Otherwise on your own there’s only so much that you can do. There’s a good amount of twists and espionage throughout the movie so it makes for a really solid adventure.

The film starts off with two supreme court justices being taken out by some kind of assassin. People wonder why and how this happened but nobody really knows. That’s when we meet our main character Darby. She wrote a quick paper/theory on who she thought actually set this up and it’s a big conspiracy involving the government. She tells her teacher that she’s having an affair with and he tells his contact within the White House. Soon enough the teacher is dead and eventually the same is true of the White House contact. It’s clear that Darby struck a nerve in her paper and so she needs to try and put as much distance between her and these guys as possible. The last person she can trust is a reporter named Gray but can she really trust him?

The film definitely makes it look easy with how the justices were taken out but you figure it had to be tough and so the only people who could do this would be professionals. That’s pretty much what the government says here. They all doubt each other like the FBI going up against the CIA but at the end of the day they have so many “leads” and theories that it’s hard to put any stock in any of them. The government is not close to cracking this case at all except for Darby who seems to have a handle on it. We don’t really get to find out most of the details until near the end of the film but it’s definitely very interconnected.

Darby is a solid main character and I can definitely understand why she wanted to stay out of this. Everybody around her keeps on dying and she doesn’t want to be next. Absolutely understandable since it’s not like Gray could likely protect her from the whole government if it comes to that. At the same time, he really needs her around as a witness because otherwise he doesn’t have a case. His boss reminds him of that a lot. Honestly the boss is a pretty good character, I would say he’s reasonable and at the end of the day he’s someone who actually will have your back.

Darby puts herself in a lot of risky positions throughout the film so I’d definitely give her kudos there. As for Gray, he’s a good guy as well. He won’t be bought by the government or any of the villains. He’ll just keep on going until he has the truth in hand. Having someone you can depend on like this is absolutely massive. The heroes have to survive being shot at and tracked down after all. If either one of them had been on their own for the whole movie then they would have certainly been defeated. You need teamwork to survive a situation like this.

The Pelican Brief has a really strong atmosphere going on the whole time too. You always feel a bit unsettled as the characters are walking around because danger can be anywhere. Like when Darcy is walking with the white house guy and doesn’t realize that he was taken out by an imposter. You know that things could go very badly for her right from the start. You also don’t get all of the answers right away as the film likes to leave you guessing on which squad actually sent out the it this time. Every group has their own reasons foe either trying to destroy the brief or in allowing it to succeed.

There aren’t too many heroes here as a result since everybody is protecting their own self interests. Even the President of the USA doesn’t look very good here as he’s also very suspicious and cares more about being re-elected than being just. As a result you see him quite a few times taking the low road here. In general it’s hard to win when everyone above you is so corrupt. That feeling of powerlessness is definitely a classic in the conspiracy genre.

This movie is fairly long but it’s executed well. In this case you can understand the length because of how complex the plot is and how the film has to develop everything. It does lead into a very satisfying ending so I’d say that worked out well. Additionally it has a good amount of replay value as you look at the scenes now knowing what you learn from the ending. It would make for a fun re-watch.

I would say one of the best scenes in the movie is when the heroes have to head to a law firm to track someone down. Needless to say, the villains had already anticipated this so it’s not very easy but it was a good try either way. Getting out of there alive was a puzzle in itself as choosing the wrong way out or showing weakness could be fatal. There is definitely a body count here as learning just about anything can put you in the hot seat. There may be some times you figure that the main characters should be dead at that. I suppose a defense you can make is that the villains still have to be a tiny bit subtle or this will become a big thing. So they can’t go around popping everyone off and have to at least have some kind of cover-up. They definitely took out the other characters quick enough but we don’t actually know how long they were planning that. So it could have taken longer than expected.

When it’s you against the world then you really can’t afford to take it easy. The heroes are always on the move and the only real ally here was Gray’s boss. That guy deserves a special shout-out because he actually was very helpful and wasn’t just around to waste time or slow the pacing down. Once he saw how serious this was, he was ready to help right away. I think that’s one thing this film has over other conspiracy titles. This time not everyone was in on it so you actually had a few good men who were helping out or minding their business. It wasn’t completely hopeless and the ending helps to support that as well. Mix in the solid writing and you’ve really got a winner here.

Overall, The Pelican Brief is a pretty good government conspiracy film. These kind of films can make you feel paranoid or you can just say that the whole thing feels bonkers. Either way you can have a good time here. The name is also rather catchy and actually becomes something to think about as opposed to just being some random title. Everything has some meaning in this film. So check this one out if it sounds like your cup of tea.