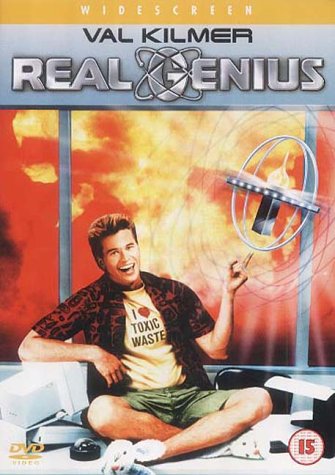 When you’re a genius there are a few things you really have to keep in mind. There are those who would try to use your skills for their own personal gain and additionally you have to be careful not to burn out. Go in too hard and that’ll be it for you. The main character has to end up learning this the hard way. It’s an entertaining film and while it has a few weak points that keep it from getting to the next level, I would still be able to recommend this one.

The movie starts with the government telling Jerry that they need the laser which can blow someone up from any distance. Jerry was confident that his star student Chris would be able to build this but the guy has been slacking off a whole lot lately. At this point the deadline is getting real close so instead he decides to take in a new kid named Mitch to take over the project. Perhaps now he will get results. Mitch is eager to help and knows Chris as a living legend but at the same time he’s not thrilled with how the guy is always slacking off. It’s not quite the experience that he was expecting, that’s for sure. He doesn’t realize the true stakes behind what he is building either and is just eager to pull it off. We’ll see how that goes.

Right off the bat I do like the government angle. The whole building a laser thing makes a lot of sense and led to a fun intro scene. They were also quite ruthless here as it’s heavily implied that they decided to take out the one guy who disagreed with the plan. It’s safe to say at such a high level that you should be careful about stepping off of a project. Doing that now makes you a big security risk since you know about the secrets. These guys did not hesitate either considering that they probably knew him for a while.

Unfortunately the government really doesn’t get to appear much after that until the very end of the film. It’s a shame because they were definitely one of the highlights here. Jerry does well representing the shady characters though. He is good at manipulating Mitch and also talks back to the government at times. Naturally they do have most of the power here but he still doesn’t let them just walk all over him. He manages to stand up for himself as needed. He is certainly a ruthless villain since he doesn’t care about anything aside from his paycheck at the end.

The movie handles him really well though. He’s not just cackling in the corner or anything like that. He still seems reasonable on the surface and you almost think he’ll be a main hero at first. Once he started showing his true colors that was it though. The first hinting of this was likely when we found out that he wasted a whole lot of the money for the project on random things he wanted. Not the most responsible guy eh?

Chris is fun but I do think he could go a little far at times in how he would mess around. I get that he didn’t want to take things too seriously so he wouldn’t crack and that makes sense but after a point that just felt like an excuse. There’s a difference between not overworking yourself and still doing some basic work. As the film goes on he eventually learns more about that but in the meantime I can absolutely see why everyone was so fed up with him. The guy wouldn’t just goof off but actively disrupted and distracted everyone else. I would say it’s clear that he was still the smartest guy in the classroom but he really didn’t use those talents to help anyone.

In a way he would almost feel like an antagonist at times if it didn’t turn out that the invention was evil. As for Mitch, he’s a decent main character but he could be a little timid the whole time. It made it real easy for other kids to show up and start teasing him. You gotta be bold and just go with the flow or things are going to get tough in a school like this. He also gets a quick romance plot in the film but I wouldn’t say it was anything all that special. It does happen rather quickly and didn’t seem all that realistic. I’m glad he was able to turn someone else down in the meantime who was after him even if his reaction times were slow but I wouldn’t say it was enough to get me on board with the romance.

Maybe once Mitch had been there for a few semesters or something but until then it’s just a smidge too fast. Then you have the main villain Kent. I mean, in a way Jerry’s the main villain but the difference is that Kent was acting like a villain from the start. At least Jerry puts up a front but Kent doesn’t bother with one. He just openly attacks Chris and messes with his things. In particular one of his sabotage moments was really a big deal with how he ruined a really expensive gadget that cost time and money. I thought he got off really easy all things considered.

The main heroine Jordan got her role in all of this as well. She has a hard time ever sleeping so she is hyper 24/7. The film didn’t give her a ton of time but I thought that she was a nice character. Jordan really stuck out right off the top with a quirk that was memorable without being too annoying. If this film got a sequel I could see her doing a lot more there.

I still say that the government should have appeared more though. The slice of life scenes with the kids at school is still good and all but the government scenes would have really pushed it over the edge. That’s absolutely what would have been the best route here. The only scene I thought was a little unrealistic was when Kent records Mitch so everyone can make fun of him at lunch.

They’re all geniuses and recording isn’t difficult so I’m not saying that this was hard to believe, but that the school wouldn’t get back at him somehow. Ultimately they still want more students in the future so it seems a little counterintuitive to let the bullying go this far. If the school gets sued or something then it will discourage attendance. It’s hardly the worst bullying I’ve seen in a film but it really stood out here. Maybe because it’s just so open while a lot of times the bullying is at least done in the shadows. A valid argument could be made that nobody could prove it was Kent, but it seems like nobody really even cared.

Overall, Real Genius is a good movie. The romance can be a bit cheesy at times but ultimately it’s not a big part of the experience anyway. The writing here was good and I do always like the idea of a school for geniuses. There’s a whole lot you can do with a solid setup like that. This film perhaps didn’t capitalize on it to the fullest extent but we did have some fun inventions and quirks in the first half. I liked the instant ice for example and the heroes had a good solution for the laser at the end. I’d recommend checking it out for some light hearted fun.