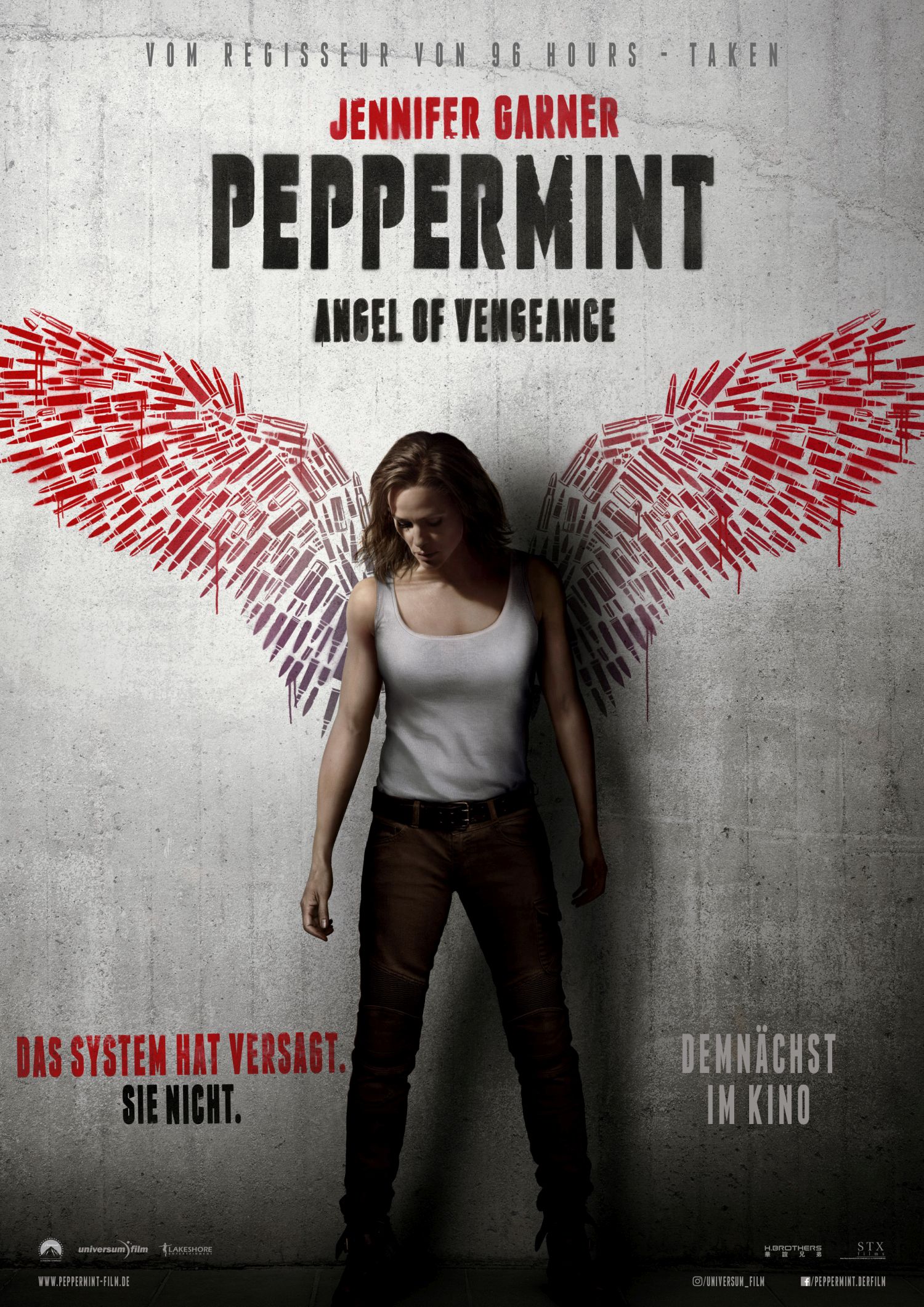 Peppermint is definitely one of those films that is very much a basic thriller. There’s not a whole lot going on here beyond the main character getting her big revenge but that’s exactly what you’re expecting here. The film lives up to the premise it’s advertising so that’s always a good thing. In the end it can be a bit violent as you can guess but ultimately I’d say it’s a fairly decent thriller that holds up well.

The movie starts off with Riley destroying a villain so then we get a flashback to set this up. Her husband was recruited to get into a dangerous gig but he declined the offer. The main problem here is that the news of his declining didn’t make the rounds in time so the mob leader quickly destroys him as well as his family to make a statement. Riley was able to survive the bullet wounds though and after seeing how the justice system was bought out by the crooks, decides to handle this on her own. At the end of the day there is nobody else that she can trust but herself to get the job done here. Now it’s a race to destroy everyone who has wronged her, the courts, the gangsters, etc. She will keep moving forward until she has destroyed her enemies!

There isn’t a very large cast here as most of the villains are bumped off fairly quick. I would say the only important villain here would be the actual leader at the top of the charts. He’s not someone who should be taken too lightly at all. Diego is his name and he actually does a good job of ruling the mob. The guy rules by fear to the point where he murders people just for thinking about betraying him. That’s certainly an effective way to
stay in charge and also prevent more people from getting ideas.

At the end of the day once you get past the fear then he’s just another guy. In fact we even see the mob that owns this mob and it shows how he’s still just a big fish in a small pond. I suppose if we ever get a sequel to this it could be about Riley going after those guys next. The movie really fleshes out the world around it pretty well so there’s a lot you could do after this. To an extent Riley even feels like a bit of an Anti-Hero. We see that she has ended crime in a whole area and is protecting people even outside of her quest for revenge.

She helps a kid by beating up his alcoholic father and just generally makes the world a safer place. Riley isn’t above murdering her opponents of course so she’s not a full hero but definitely a figure that will give the villains some real pause here. They absolutely do not want to mess with her. Riley went off the grid for a few years to hone her fighting abilities and this seems to have really paid off big time. At this point she is able to out fight just about anyone in her way even if they are armed.

Riley is a fun lead character. She goes about her business very directly and doesn’t drag out the deaths or anything like that. She quickly lets them know why she is about to destroy them and then does it. It’s all a very straight forward approach which shows that she means business. Also she did try going through the legal system first. It just didn’t work so she was then forced to seek other avenues which made a lot of sense. Once the mob has bought out the court then it’s clear that justice won’t be coming.

Then we’ve got the main cop Beltran who does well here. He’s definitely not thrilled about getting mixed up with the gang since everyone who messes with them tends to disappear but he does want to see true justice get accomplished and goes past that fear. He also helps the film execute a really solid ending which really helps wrap everything up nicely. A bad ending can really and I mean really hurt for a film like this so getting around that was absolutely crucial. This ending is basically perfect so I was satisfied.

I wouldn’t say there are any big issues with the film either aside from some violence. As a revenge thriller like this you can absolutely bet that people are getting shot and destroyed but by and large it avoids being too excessive about the whole thing. What helps is that we mainly follow Riley as she destroys everyone and don’t get nearly as many scenes of the villains popping each other off. It’s a pretty big distinction because that’s usually when the films tend to get a bit more gratuitous with that.

I also always enjoy the classic trope of one person launching a full war against the entire villain empire. Just give her a few months of training and skills and now nobody can stop Riley. Is it super realistic? Perhaps not but it’s definitely always fun to watch. She also got a whole lot of intel to be able to locate everyone and take them out at the ideal times. Riley didn’t just panic and jump into action but planned everything out carefully and it paid off for her.

Overall, Peppermint is a pretty good film. I dare say it was better than I had been expecting. If you told me that this was a comic book origin story I would have believed you. It’s very much got those Punisher vibes at the ready. The fights are good and there is a lot of room to make a sequel out of this. I would definitely recommend this if you want a pretty intense action thriller. I wonder if revenge thrillers go for one word titles on purpose. Salt, Taken, Peppermint, Faster, etc. Maybe it’s a subliminal message that the film is about to be nonstop action with quick pacing.