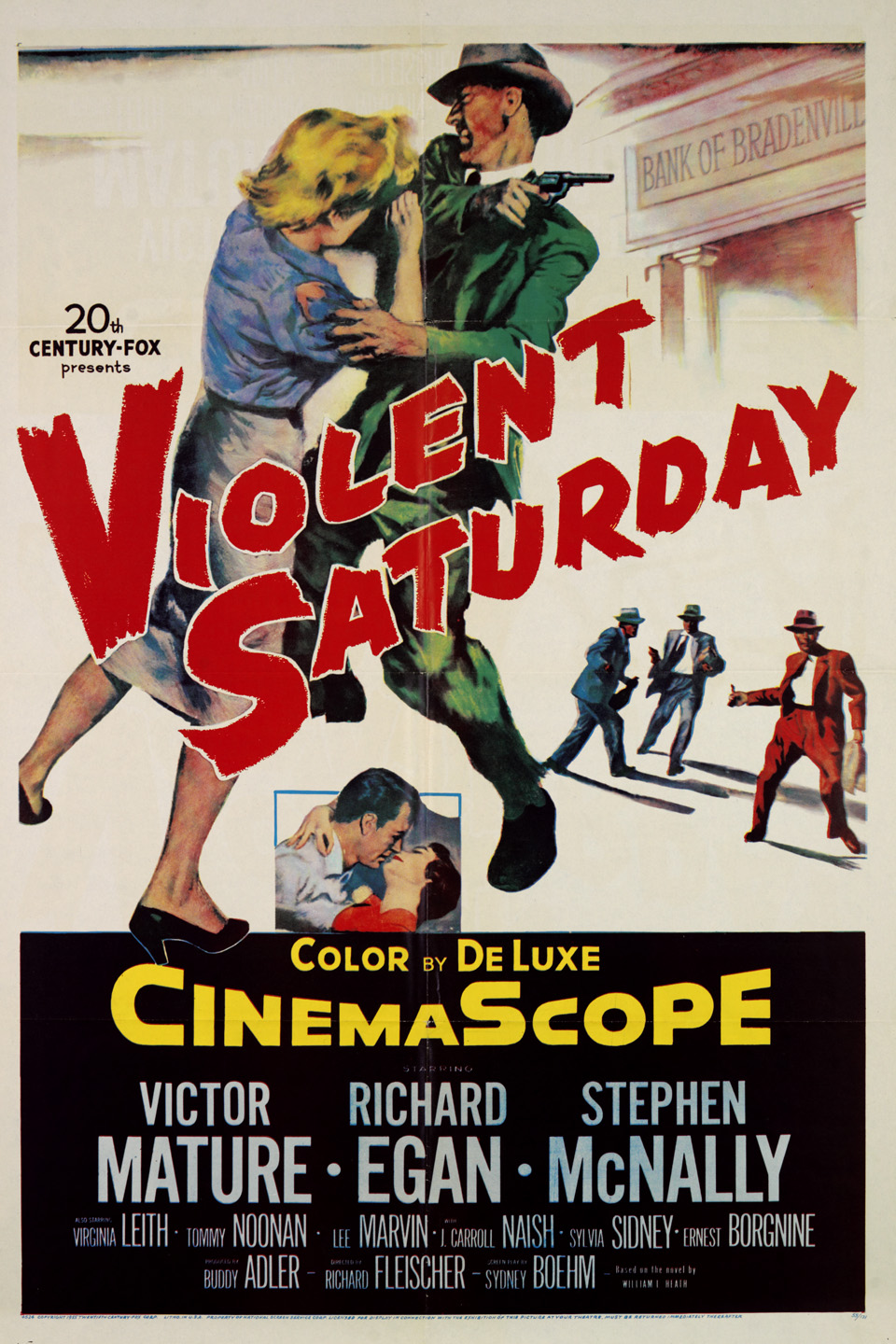 Violent Saturday is one of those films with a rather large cast as the various plots all converge by the end for the climax. How well the climax works will likely depend on how much you like all of the characters and plots. I would say that the movie is fairly solid and the plots work well for the most part with one exception. You should have a good time with this one, it can be a bit of a slow boil for a while but the ending definitely handles things nicely.

So lets go through each of the plots here real quick. The main story tying them altogether is we have 3 crooks who have decided to hold up a bank. They’ve done their research and aim to strike at the perfect time where there aren’t too many people who can stop them. Most of the film is based around their preparation so it takes a while for them to actually do the job. That’s where we get the various sub plots to come in as the characters from all of those plots end up being at the bank.

First up is Harry who is the most annoying character. He’s a perv who always runs outside the window of Linda so that he can catch her after she has come home for the night. Unfortunately she doesn’t realize that her apartment is quite high up and so with the window open anyone can see her. Harry doesn’t have the courage to talk to her in person though and so his life keeps on falling through the gutter. Perhaps this experience will teach him some courage but I can tell you that he is easily the worst character in the film.

Then you have Boyd who gets drunk rather easily. He’s not too happy with his home life at the moment and there is a lot of tension with his wife. He is more direct than Harry though and actually does make a pass on Linda. Ultimately she doesn’t take advantage of him in this weakened state and takes him home but not before scolding the wife. The scene was rather intense as Linda dares the lady to try and fight her. We definitely know who would have won that fight.

Meanwhile Linda is a solid character. She’s certainly quite popular in this town but always handles herself with elegance. She is perhaps a little too forgiving as she could have been a lot harder on Harry but it’s a little difficult to call that a character flaw. Linda is easily one of the nicest characters here and doesn’t make any big mistakes so I can certainly appreciate that. Then you have Elsie who is a thief. It’s quite fortunate for her that Harry is the one who located her since the blackmail canceled each other out there.

Elsie comes across as a little petty. Circumstances may be tough but it’s no excuse for being a thief and she gets quite outraged at anyone calling her out. This plot felt like it had the least amount of relevance to the story but at least it’s one more dynamic to follow. We also have an Amish family that is living in a plot of land nearby and that becomes relevant later on. They follow a very peaceful way of life and so they refuse to use violence even when the need arises.

I always think this can be extreme. If that’s the way you live your life then that’s that of course but to protect your family you feel like it is the time to cross a line. Fortunately the main member made the right call when it counted. Finally we also have Shelley who I would say is the main character here. It’s an ensemble film but at least if I had to pick a lead out of them it would be this guy. He did not serve in WWII so his son isn’t taking that too well when the other kids make fun of him.

Shelley knows that it couldn’t be helped but it’s difficult to convince his son of that. When this whole bank heist occurs, it’s his chance to finally do something about this. He can be a hero but if he makes the wrong call then he may just end up being dead. So he definitely has to watch out but in the end he does a good job on all counts. Considering that the odds were really against him, Shelley had to use a lot of strategy and tactics in order to turn the tides.

I would say Violent Saturday succeeds because the characters are well developed so it adds a little more tension to the climax. Not all of the characters were good to be sure but the overall picture was on point. The writing was good as well and I enjoyed the climax. It’s definitely tough having to go up against multiple opponents when your own allies aren’t really doing anything to help you out at least for most of it. A bank robbery like this is also a lot more intense back in the day because without cameras or anything, you have to assume that the robbers will never be caught if they escape. It would just be difficult to ever catch up to them and so it became even more imperative that they be stopped here.

Overall, The character arc for Shelley was really good and I’m glad that he got to really prove himself here. The movie keeps a good pace throughout and the fight at the end is fairly long so we get to see a lot of tricks from both sides. I can’t think of many films where the climax takes place in a barn either so that was a very original location to use. If the others had been harder on Shelley for murdering the villains as he fought them then that might have hurt the film a bit but fortunately while they didn’t agree, they weren’t actively getting in Shelley’s way. Now that would have been annoying. This film ages well so I’d recommend checking it out, maybe watch it on a Saturday!