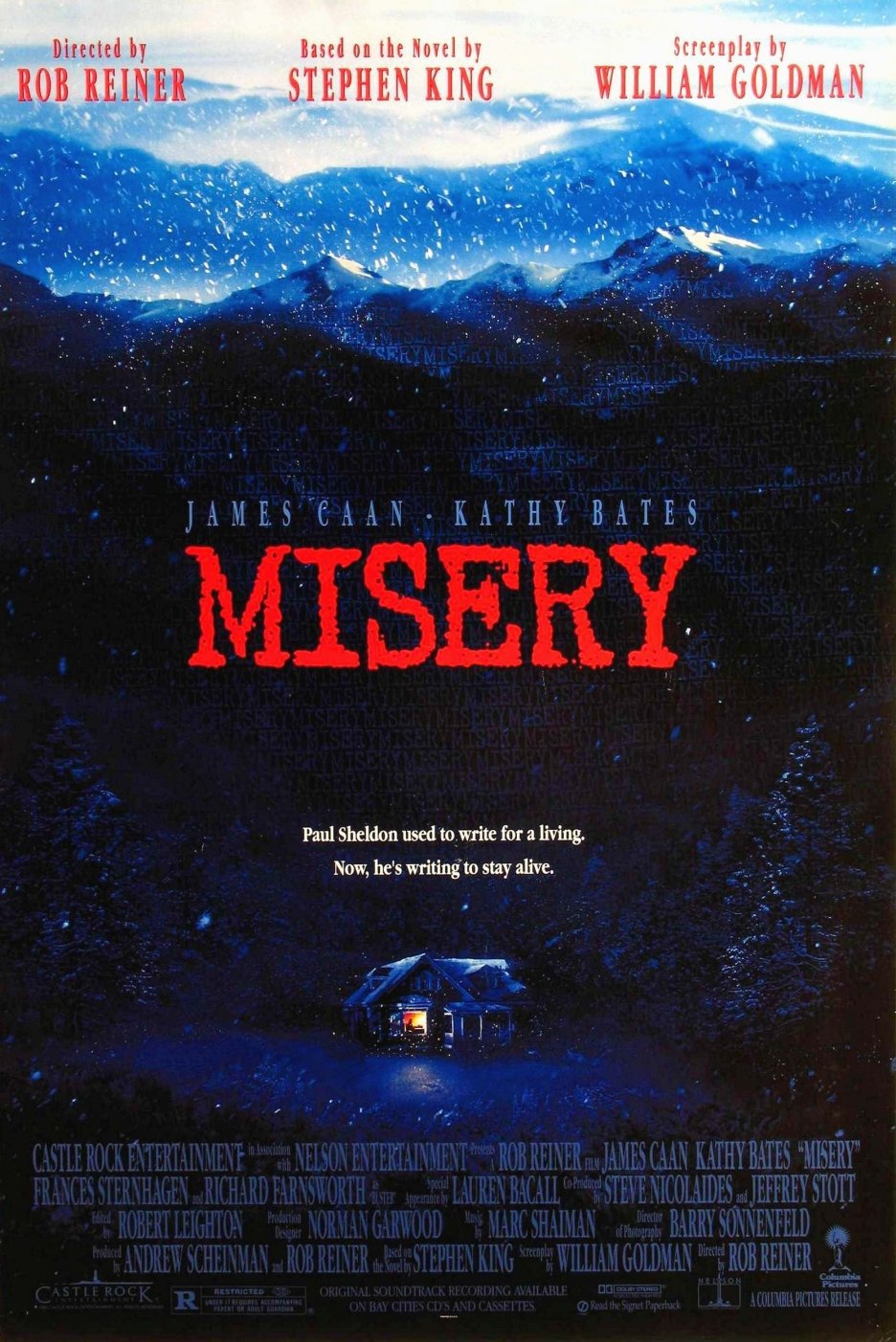 Nobody wants to be trapped and at the mercy of a stranger. It just feels dangerous even if the person at the other end isn’t absolutely bonkers. Of course for a horror type film you know that this will be even worse for the main guy. Misery is a film about a guy having an absolutely miserable time so you will certainly feel bad for him. There just aren’t too many avenues for escape.

The movie starts with Paul wrapping up the draft for a new book and heading back home. Unfortunately he is caught in a snow storm and nearly dies but is saved by a nearby resident known as Annie. Her house is in the middle of nowhere unfortunately and she claims that the phone lines are down but people will come eventually. We know this is a lie but Paul has no choice but to believe this for a while. It ultimately ends up getting more and more obvious that she is leading him on though as Annie begins to act rather insane the whole time and gets more and more drastic. Paul can’t walk so escape will be difficult. Can he survive this experience?

Now I think the film definitely does deliver on giving you a situation where you can see how Paul is rather helpless. A lot of times in horror films you can do a lot of backseat driving and keep wondering why the lead is making all of the wrong decisions all the time. It’s usually quite valid too I might add. For this film there is less to criticize the lead on because there just isn’t a whole lot that he can do. He literally can’t walk so that removes most of the escape options. You can either try to just do everything Annie says and hope she doesn’t do anything drastic or you can be hostile from the start and use everything at your disposal.

Paul mainly goes with the first option but Annie just keeps getting more and more crazy until this just won’t work. You can’t really please someone who is insane for very long. It’s just not going to work and that’s what he find out the hard way here. So he handled things reasonably well, perhaps he could have done some things differently but it’s hard to say if the outcome would have been better at all. For example, when Annie drove off maybe he could have just left the house entirely, but it’s risky and even if he did pull it off, he would be a sitting duck if he didn’t get far enough by the time she returned.

On the other hand, without being able to move or do much, the film also doesn’t give you a lot to watch as the viewer. Paul is trapped in the same room for most of the film and I wouldn’t say it’s very fun. Also, Annie goes quite far with breaking his ankles and really putting him through the wringer. The film doesn’t show a lot of violence beyond the one foot breaking scene which was rather disturbing but it’s all still rather painful.

Where the film falters for me is that this just isn’t a very fun movie. With Paul being rather helpless for most of it, you just have to watch Annie be super crazy as she keeps threatening Paul and forcing him to do things that he would rather not like burning his books or writing a sequel to Misery. Paul is eventually able to manipulate her but in the meantime it’s just annoying whenever she is on screen. You also know right off the bat that the sheriff isn’t going to be a match for her so you’re hoping that the film will just hurry to the end.

Annie isn’t a particularly likable villain. The film was certainly not trying to make her sympathetic anyway but because she dominates the screen time so much, that doesn’t help the movie either. The thriller aspect isn’t really able to get around that. So the film succeeds in making this a rather scary situation but not one that you’d find very enjoyable. For me the only silver lining here was the Sheriff because I liked that guy.

You just know that in horror/thrillers like this the sheriff is always doomed. No matter how earnest he is or how hard the guy tries, you figure he is still going to be taken out in short order as soon as he finally figures something out. Either way he’s still the best character but you wish he could have surpassed his limits and really made a difference. Done something to make his character arc hit a little harder at least.

As for the ending, it’s decent but not quite as bold as it could have been for a horror title like this. You see how the cycle could continue and all but it’s more left up to your imagination. You can also interpret it more like a gag. I do think that while Paul is keeping on a brave face, there’s nothing about the experience that you could call positive. At the end of the day this whole film was a traumatic experience for him and sometimes you just have to admit that things didn’t happen for the best.

Overall, Misery is a film that lives up to its name with how the whole thing is just a dreary experience for the guy. I don’t know what you could do to make the film a bit livelier within its premise but maybe making Annie a bit more reasonable would be a start. Have Paul be more of a jerk and gradually things start to get a little more drastic because of that. I don’t think the movie would ultimately have ever been great or anything but Annie being a little less crazy could have helped. Maybe have Paul’s legs/feet completely shattered from the accident so instead of her breaking it, it’s yet another thing that he has to worry about during this tense situation. Then with her trying to get him to write, it would be a little more on the unnerving side because he has nowhere to go and she is crazy, but perhaps not violently so.