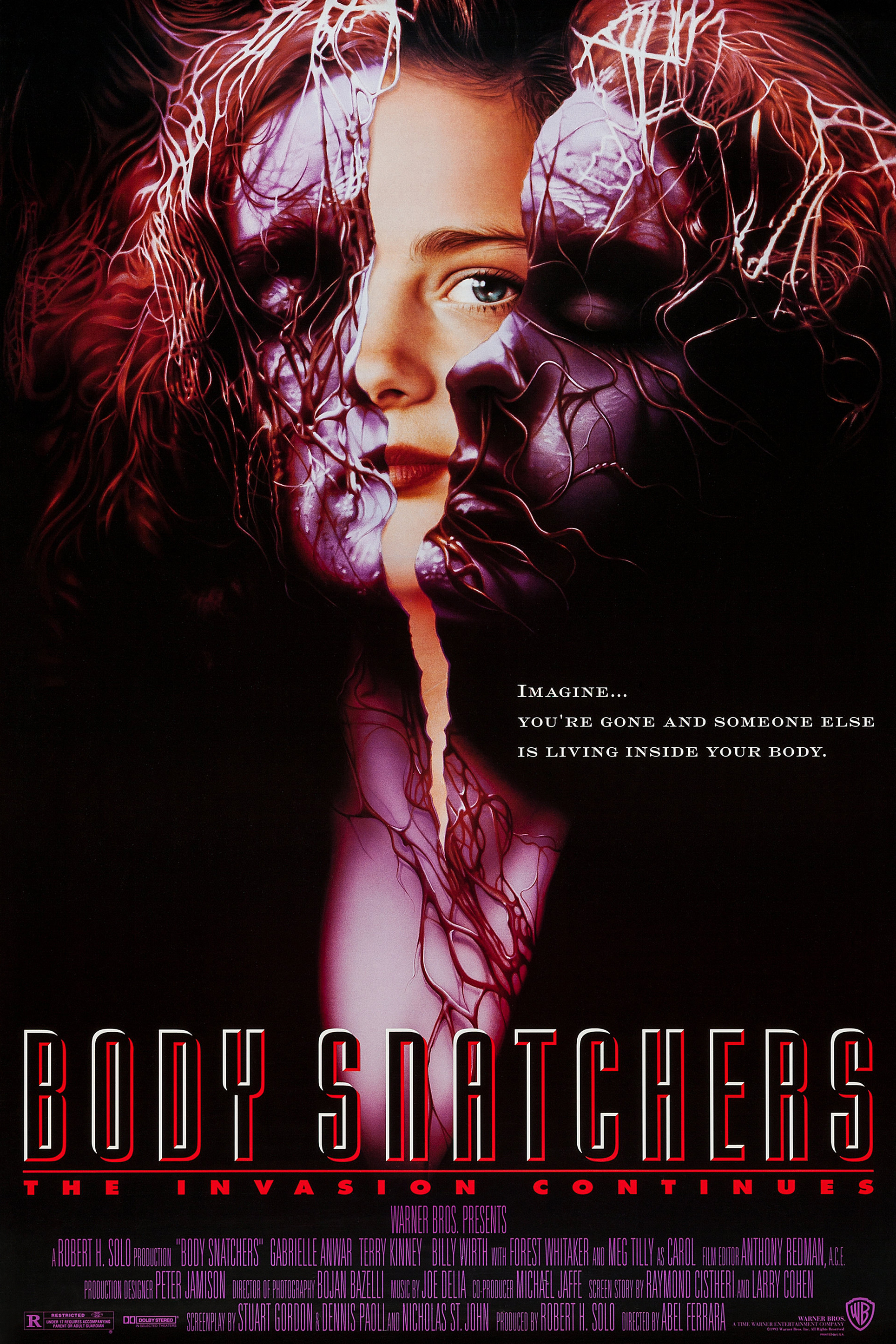 Time for another Body Snatchers film. This one doesn’t really take the concept as far as it could have gone though. There isn’t a whole lot of focus on the actual alien dopplegangers running around until near the end and by then the film is almost over so it’s more about running and shooting. I would have liked to have seen the humans have to walk among them a bit more, use some strategy and all of that. It felt like we missed out on a pretty hype amount of potential scenes there.

So the film starts with Steve and his family heading over to a military base to run some samples. Steve is part of the EPA and it seemed like their might be some health issues over here. Little did he know that the issues run deeper than he could suspect. The base is slowly being taken over by aliens who are kidnapping the humans in their sleep and replacing them with an alien body double. A guy tries to warn Steve’s daughter Marti inside of the bathroom but considering how crazy he looked and how he had a knife, the guy just seemed insane. Once the heroes start being picked off, they have to wonder if it might already be too late.

One thing that the film does really well is the dialogue from the alien version of Carol. While Steve looks horrible during this whole sequence, she starts talking about how there is no place to hide. The aliens are everywhere already and the instant he falls asleep it will be game over. She makes a solid case for why he should give up. This is usually where the guy would yell about friendship, determination, how he’ll fight to the last breath, etc. Instead he doesn’t do any of that and falls into her arms. It was quite embarrassing really but the speech was given in a good way. The film made the speech actually appear to be rather creepy which isn’t easy.

Lets talk about Steve though and why he’s such a bad character here. The guy just doesn’t take any hints and he’s not very available for Marti. I’d say he was right to chase the military guys off for letting Marti drink and missing curfew. That’s certainly reasonable and it’s not like it was hard to get home at 12. I’d never want them to see Marti again either. Where he falters is in not taking any time to connect with Marti here especially since he went on the rebound so quickly. Then after being told about how people are acting differently he takes no steps with that. Maybe he could have at least connected the dots that Carol was a bit different.

Additionally, he absolutely falters at the end of the film. So by this point he knows about the aliens and all of that so he needs to get back to his family. What does he do? He sits down and begins to cry. This is not the time for that! We don’t see how the scene ends but presumably this is when they grabbed him and took the guy out. There’s a time to get emotional and all but this wasn’t it, not by a longshot. It just made him an easy target and in the end that was game over.

Meanwhile Carol was taken out rather quickly so there’s not as much to say about her. She and Marti didn’t get along but you can blame a lot of that on Marti as well though since she wasn’t trying to keep an open mind for any of this either. It’s really a mixed bag with both parties not doing so well here. Marti never grew on me during the film either. She lets bad influences corrupt her rather quickly. There’s no way she should be drinking yet and staying up past curfew is just asking for trouble. She’s also easily fooled by one of the aliens into looking back and giving away her position and takes a while to make a decision near the end.

Marti is not the kind of main character that you want in your corner. Her younger brother Andy also isn’t quite old enough to help much at this point either. So even though he can see the aliens…what’s he going to do about it? Nobody will believe him anyway and that can be annoying. I also have to question a few scenes with him like how he actually escaped the school of aliens. Surely they could catch one kid right? That whole bit seemed like a poorly written way of trying to alert the rest of the characters.

Jenn may not have been a good influence but at least she had some character. It would have been nice if she could have done more once she found out that her mom was acting strangely though. Her character just sort of vanishes after that. Tim is the standout character here. The guy is jumped by a bunch of the villains but keeps his cool and also does well in hiding his emotions. The guy is a soldier and that training really came in handy here. It was nice to see a character who wasn’t panicking or cracking under pressure like that. He should have been the main character to be honest.

The way the creatures take over the humans is definitely interesting with how the worms slowly get you. Why don’t the aliens just handcuff the guys once they are in the process of turning though? I assume they have a hive-like mind so they know when this is in process but if not it would be easy enough to coordinate. As soon as the character is asleep and the process has started, have a few aliens run in and just pin the character down. That way if they wake up there is still no way to escape. Given how this happens several times you’d think that would be an option.

You certainly feel bad for the humans who notice and are unable to escape though like one army guy who fights off several aliens before being taken down. He did good to last that long. The initial period during the alien attack is always the most hectic so if you can survive that then your odds of survival increase. It’s why this would really be an excellent plot for a whole TV show. It’s the kind of story that can really keep going and be really exciting for 10 seasons. Of course you want to be careful with pacing but there’s just so much you can do and it’s why the plot is golden.

Now because of the length of one movie you know that the movie can’t do everything with it but I still feel like it didn’t do much. I like the intrigue of not knowing who has turned and so more scenes of the characters just existing and living out the day before the grand climax would have been really good. I’d like a strategy session with the heroes where they think about next steps and things like that. The film’s just too short to get into all of that.

I also like to think there should be a more visually interesting way of making the clone than using the little worms everywhere. It’s sci-fi so how it works doesn’t really matter (I assume the worms transmit the energy or something) but make it cooler like a ray or something. The time it takes to make a clone also seems inconsistent with some taking forever like when they grabbed the main girl but other times it’s really quick like when the Dad was taken. There are time jumps in the film so you could say that a lot of time had passed I suppose. It’s probably one where you could do the math and see if it really adds up.

I really liked the scream that the aliens do when they have caught somebody. Now that’s eerie. The movie really nails down a lot of the horror elements of what would make an alien invasion scary. In some ways it’s scarier than a Xenoomorph invasion because at least there you know who to blast while here you have to be careful about friendly fire. Especially the longer the invasion goes on since people will be pretending to be like the aliens in order to survive.

Overall, Body Snatchers has a great plot but finishes before it can be fully executed. We don’t get a lot of scenes for the intrigue of exactly what this means for the Earth. The story is focusing on a small area which is fine enough but then I want to see them reacting. The way the body transfers go is also a little on the gross side so they should switch that method up in the future. The obligatory bath scene will also make you shake your head since it has no relevance to the movie. Nobody is seriously falling asleep in the bath at a time like this. Cmon now. The movie could have used a better main cast too since the family wasn’t likable and you’re just waiting for the army guy the whole time. If you really like the plot then it may be worth checking this one out in order to see it in action but otherwise you’re better off checking out one of the older versions.