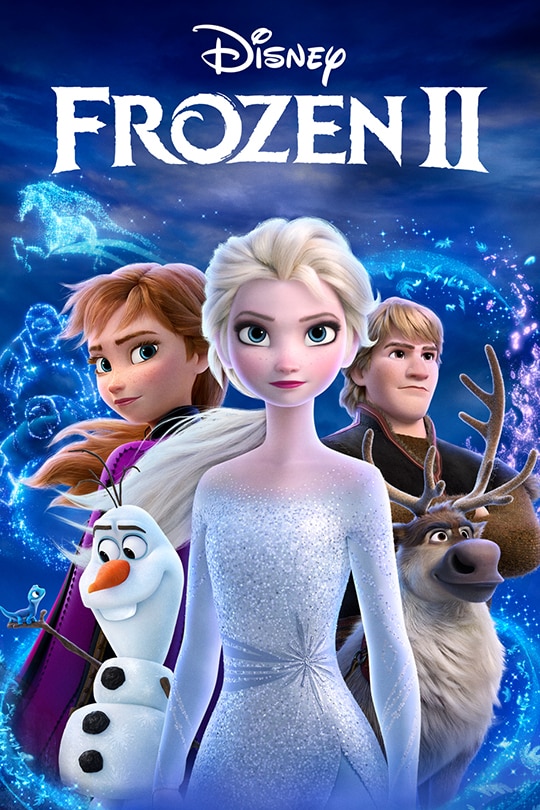 The original Frozen was definitely a very fun film with a song that caused a lot of waves around the globe. It’s one of those songs that you don’t really forget because of how catchy it was. The songs here don’t come quite close to topping it but it’s still a good soundtrack and the main singer’s on point. We also get some more action here and so all told this is a sequel that really holds up to the original.

The start of the movie takes us back to when Elsa and Anna were kids. Their parents tell them about how there’s a supernatural forest out there that is very dangerous. It’s asleep right now but if it ever wakes up then they’re all doomed. The parents go die in a boat crash and then we go back to the present where things are going well. Elsa rules the kingdom really well and has a nice handle on her powers while Kristoff is getting ready to propose to Anna. This is all put on ice (Ha!) when the spirits wake up after tricking Elsa into using her powers. The elemental spirits of water, fire, earth, and wind intend to destroy the kingdom and claim their vengeance. Elsa figures that it’s up to her to stop them but doesn’t want to bring Anna along since she’ll be in danger. Anna’s not going to let Elsa go so easily though. Will this all work out for the best?

Throughout the film Elsa is trying to ditch Anna and you can’t really blame her. Anna has done well to keep on fighting and hold her own throughout their previous adventures but at the end of the day Anna doesn’t have powers while Elsa does. So it makes sense not to bring her onto the front lines against these elemental monsters. Even Elsa nearly dies a few times while fighting the formidable water spirit and if she had to protect Anna then she may have lost that battle. I don’t blame Anna for trying to get in either but I’m saying this is not a character flaw on Elsa’s part but is in fact the correct strategic decision.

I liked Elsa’s portrayal here quite a lot. She’s still very mature like in the first film and hasn’t really lost her edge. She is more open to working in a group and hearing everyone out but will make the command decisions when necessary. Her mastery over the ice abilities is also good to see and it’s clear that she has not been slacking off. Elsa has been working to better herself off screen and holds her own in each fight. Having ice abilities would be really cool to have and the film does a great job of illustrating that. Elsa is very determined and never gives up, she’s absolutely still one of the best Disney princesses.

Meanwhile Anna is still a great foil to Elsa’s character. It’s almost like the Batman and Superman dynamic where she has more to prove since she has no powers but always ends up helping out quite a lot. Anna is very creative and can make herself useful in a great number of ways. She may overthink things as she never gives Kristoff a chance to finish his sentences as she runs with whatever the first few words were but it’s because her mind is operating at such high speeds. Anna is quirky but in a fun way and that dynamic between her and Elsa is a big part on why the Frozen films are so much fun. At the end of the day she looks great throughout the movie.

Kristoff also looks really good here and in some ways that’s more impressive than the first two. See, you expect Elsa and Anna to look great the whole time because they are the main heroines. For Kristoff it would be tempting to shelve him for the sequel or just make him comic relief but he’s actually useful the whole time and gets a number of important scenes to himself. He’s never just in the way or slow to catch on but instead he helps out a lot. Whether its herding animals or keeping the townspeople calm, Kristoff does what he can to help. Towards the end he is quick to help Anna with her plan and doesn’t ask questions about it. He just trusts that she is doing the right thing and goes in to help. You can’t ask for much more out of the guy.

Olaf is the comic relief character here and he was good. His song about becoming more mature actually wasn’t as bad as you’d expect. It’s still way weaker than the main songs of course but it was a good song about his character development as he tries to stay brave. Some of his jokes may drag on a bit too long like recapping the first film but it is fun to see if someone who hasn’t seen the first film would be able to understand what happened from his story. Personally I think they would be able to understand because he does still hit the main topics here. Olaf may have a hard time helping out compared to the other characters but he does get some solid emotional scenes. He’s not here purely for the comedy unlike other comic relief characters.

Frozen continues to operate on a higher level than your average musical adventure. Of course a big part of that is because the character cast is on point. This is a much stronger core group of characters than most films would be able to trot out. Additionally having a protagonist with actual super powers is a big deal too since her ice abilities make for a lot of fun visuals. There is a real sense of danger here like with the battle against the water spirit as she actually puts her life on the line. The scene of Elsa being frozen was also intense.

There’s an intensity here that you just don’t see very often from a film like this. You may not care too much about the feud from the past and those people stuck in the forest but you don’t have to be invested on that. At its core this is still an adventure about Elsa and Anna getting through their past and continuing to make the future brighter. It’s a very complete story and you don’t even need a third film. Things are fairly well tied up here although if we did get a third film, I’m fully expecting the parents to return and have a big role. It feels like we are really building up to something like that. And even if it’s not necessary, I definitely want a third film.

It goes without saying but the animation here is also stunning. It’s one of Disney’s best films in that area and the character models are on point. Each of the elements stand out visually and I’ve already talked about how good the ice is. The characters are expressive and so this actually does look like it’s even improved from the first one which should be the standard for any sequel. A lot of detail was put into this movie and it paid off.

Overall, Frozen II is a very fun film. The pacing is good and you’ll have a good time throughout. There are no areas that stall or slow down the pacing in any way. You’ll be invested in the quality characters throughout and the action scenes are played straight as serious moments. I’d be cool with the third film taking on an even more action oriented approach with a ton of big fights but realistically you’ll always have a balance with the Frozen films and this one really nailed that balance. If you haven’t seen this movie yet then you should definitely change that.