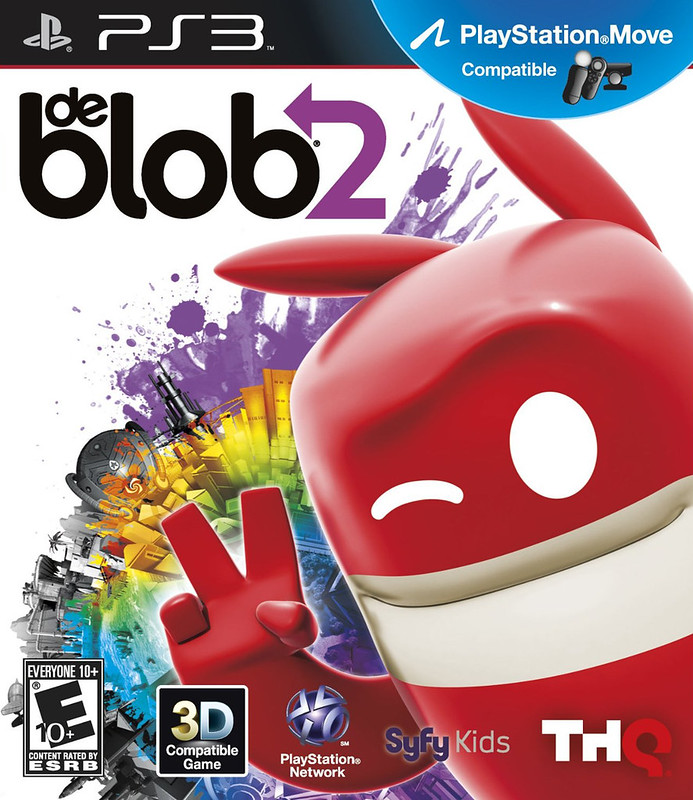 I actually enjoyed the first De Blob game quite a bit. It was a lot of fun and took a unique approach on the Platformer genre. Painting everything in the city before moving on was a lot of fun and it made for a peaceful adventure. My main problem with the game is the fact that it drags on a lot this time around and they actually decided to switch the gameplay up rather dramatically. It makes for an easier Platinum, but that’s about all that I can say for the game and trust me…it’s not saying a whole lot anymore. It’s a shame that De Blob 2 couldn’t stay true to the original.

Comrade Black is back and once again he has decided to eliminate all color. Yeah..the plot is basically the same exact thing as the first title. The story is easily one of the weakest aspects in the game. Who thought it would be engaging for every character to speak gibberish while gargling water the whole time? It gets annoying very quickly. Even ignoring that, all of the characters are really annoying. None of them come across as particularly annoying and could Blob have been given a worse design? He is always making a lot of “cool” poses after accomplishing a mission, but they all come across as arrogant or mean. A cool character can pull that off, but not Blob.

For example, Blob was actually trembling when he first made it to the villain lair? Really!? Keep in mind that Comrade Black is a baby himself who is always getting teased by his subordinates and crossdresses once in a while. He has a little horsie float to keep himself from drowning and he’s comic relief the whole game. To be fair, every character is comic relief in this game and a lot of innocent civilians die and are blown up, but this is also used for comic relief since they are just made out of ink.

The only deep part of the game is at the final level where Blob must make a difficult decision 3 times. Save the civilians who are stranded on a planet which is about to explode or keep on going to stop the main villain. I went to save these guys two times, but it never helped at all and the people weren’t even grateful. It’s still heroic to save them, but I didn’t want to by the end. I did try to help the third group once, but then I died and the game took me 10 whole minutes back. I was not going to make that mistake a second time. A cutscene played and we saw the planet blow up with all of the civilians on it. For a second I was worried, but for the wrong reasons. I thought that maybe it wasn’t optional after all, but luckily it was okay. The sidekick didn’t even care and told me to keep on going.

That brings me to another negative, the lack of check points. If you die in a section, prepare to possibly be brought back 10 or more minutes into the level. When you consider the fact that each level is around an hour or even 2, this can get old fast. Towards the end of the game, a single hit from some enemies can easily destroy you. Multiplayer mode helps a little with that as you can have a second player fire some blasters at the enemies. Still, the enemies were a little overpowered. I like a challenge, but I don’t like it when one mistake can send you back such a long ways away. This isn’t Chess after all! (Chess is hype)

Luckily you do have power ups that you can give to Blob. I decided not to buy any upgrades during my playthrough for an extra trophy, but if you do use them, it should make the task a little easier. I highly recommend grabbing more lives and decreasing the cost to roll out since these are related to my two biggest problems. The roll out will help you get rid of the Helmet enemies and the lives will keep you from losing 10 minutes of your time. Keep in mind that if you are trying for the Platinum, then you shouldn’t buy any upgrades. If you don’t, you only need to complete the game two times to be done with it. If you do use the upgrades, it’ll possibly take you 3 times or just a verrry long twice.

The platinum is fairly doable as just completing the game should get you over half of the trophies. That being said, replaying the levels sounds like a huge drag at the moment. Even if there are only around 13 levels, beating them all again could take around 20 hours. Who has that kind of time for a Platinum nowadays eh? If the levels were shorter, that would help this game tremendously. I recommend that to all games. Having a bunch of short levels is better than having a few long ones. I’ll take 60 3-5 minute levels like the Mario games over having 7-13 1 hour long levels. It’s just a lot easier to plug and play with the shorter levels.

This probably won’t come as much of a surprise, but the graphics aren’t all that great. They actually aren’t all that bad though. This game certainly looks like it is a PS3 title so I’ll give it some props there. The soundtrack isn’t even all that bad either. It goes for a full on party feel, but it’s one that works pretty well for De Blob. At the very least, De Blob is actually good on a technical level, I just wish that the gameplay could have held up as well. After all, gameplay is the most important part of a game.

Instead of painting everything to move on in the level, you have to beat a lot of missions. “Beat all of the enemies.” “Infiltrate a building” etc. This gets very repetitive as per usual and of course, if you die while infiltrating a level, get ready to do it all again. You can’t skip cutscenes either by the way so that also adds onto the time. I’m not sure how long it took me to beat this game, but it may have actually been around 20 hours, which is crazy. To think, I had actually picked this game as the next one to play because I thought it’d be a short breather before tackling FF VII as my next RPG. I couldn’t be more wrong!

The sidescroller parts aren’t even that terrible once you’re in the buildings. If that was the only part of the game, I would probably like it a lot more. There are some puzzles, but none of them are all that bad and it’s fun enough. The 3D part which I liked so much in the first game is what hurts this sequel because of the bad level designs. Ironically, the game only gets good once you are close to beating the level. After the final challenge, you are given the option of leaving the level of playing around for a while. By this point, the timer is gone so you can take your time having fun. That is when the game finally looks appealing, but by then it’s a little too late. It is convenient for the trophies of course, but beyond that….it’s way too late. By then, you’ll have very little interest in taking the game up on its offer.

Overall, De Blob 2 is a very underwhelming sequel to the first game. While the final level is the best one and the game shows promise at several points, it simply comes across as lazy and uninspired. There are only two bosses in the game and they’re both tackled the same exact way. The final boss even turns large for no reason except for the fact that it could then have the same boss mechanics as the first one. The rest of the mini bosses are the same wheel that you fight over and over again. The plot is terrible and one of the worst…if not The worst plot that I have ever played. The game should have been as good as a 7, but all of the negatives add up rather quickly and the result is that we’re given a game that I never want to play again. Trophies may lure me back in, but otherwise…it’s over!