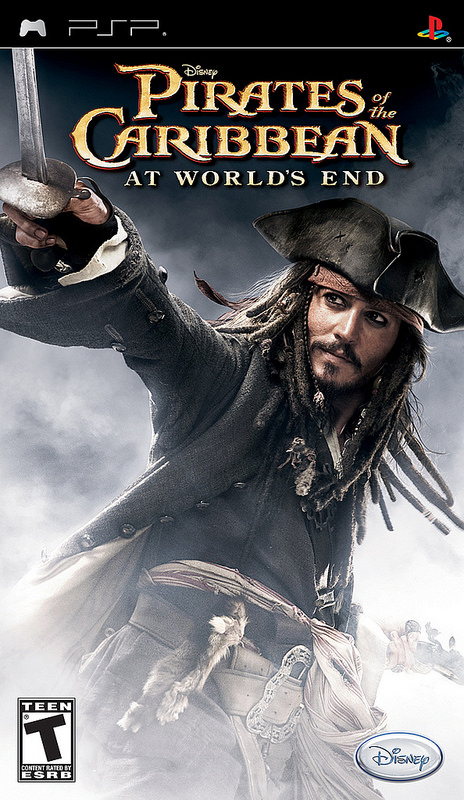 It’s time to finally play another Pirates game. It’s been a very long time since I’ve played an installment in the series. I got this game for my birthday 2-5 years ago which shows you just how large the video game backlog is at this point. The game is decently fun and I thought that it went about as far as it could within the realm of the movie cash in. With quick time events and actual fights in the cutscenes, Pirates is a solid step above the average movie tie in while still being below the average AAA game.

Jack Sparrow is a pirate who is disliked by just about everyone. He has made enemies within the government and among the other pirates as well. Still, Jack tries to get past all of that as he works to find the 7-9 pirate Lords so that they can gather up their skills and defeat Davy Jones. There are a lot of betrayals amidst as most of the pirates are corrupt and even the “good” characters like Will Smith and the main heroine can’t be trusted. All of them betray Jack at one point or another.

I can’t stand Jack Sparrow in the movies. He’s incredibly annoying and one of the saddest characters to ever lead a successful film series. (Not number 1 though. I think we all know that James Bond deserves that honor) The game does a better job of handling his character though. Jack comes off more as a troll than anything else here and he keeps hit wit about him even as he faces ultimate doom. Let’s just say that the way that the game ends may prove to be a rather dark fate for Jack. I can a[appreciate the ending here.

The gameplay is slightly 3D while also being slightly overhead. I’d prefer complete 3D of course, but it was fairly close to that so I won’t complain. You’ll spend most of the game just swinging your sword around as that is enough to get the job done. If you want to change things up, you can also throw knives, bombs, and shoot bullets at your opponents. They aren’t necessary, but they can save you a little time once in a while. The time is absolutely minimal though. Most of the levels are combat missions where you will just have to defeat a certain number of foes. Others will have you walk around town as you look for clues. It helps if you’ve seen the movie recently so you will know exactly who to talk too and where to go, but it’s not necessary. The towns aren’t all that large so you’ll be through them in no time.

There are around 12 levels and none of them are very long. A few good hours of playing the game should be enough to beat it. There is some replay value at least as you can go back to try and win all of the quick time events and get all of the treasure and characters. It’s not something that particularly entices me, but I can see the appeal. I’m at least glad that they did add extra characters to obtain. I also still want to give the game some credit for the quick time events. They were definitely pretty fun and added an extra notch of effort to the game. The cutscenes also actually had some fighting in them on several occasions. Some have aged better than others though as one cutscene involves a big fight between several individuals, but none of them appear except for Jack running around and doing a little flip as he attempts to shoot. It’s hard to get what is happening here, but….I guess we’ll assume that Jack won.

It’s been a while since I saw the movie, but it is scary just how many memorable moments they are. For better or worse, I definitely remembered most of the plot here. I still think that the main heroine is incredibly shady since she murdered Jack Sparrow, but later tried to claim that she didn’t mean it. It’s all fine and dandy here since dying just sends you to Davy Jones Locker, but it was a little hard to buy her act. Most of the characters are fairly hard to swallow though and it may just be that I can’t take them seriously at the moment.

There isn’t much of a great soundtrack to be found here. You’ll recognize some tunes from the movies I suppose, but for all I know, they are just public domain music that sound like Pirates. At the very least, it gives you something to listen to as you go through the game. The graphics are quite good though and it reminds me how unfortunate it was that the PSP never got more popular. The console was definitely closer to a home console than anything else and it certainly had a lot of potential there. This game is proof of that, but alas, Sony got destroyed by Nintendo in the console wars and the PSP met an early demise.

My main gripe with the game is that it can get very repetitive. After a while, you’ll realize that you are just slashing drone after drone with the exact same attack. There is no reason to use anything other than the standard slash so you can essentially fall asleep while pressing the square button and you’ll wake up to find out that you’re okay. The enemies deal a good amount of damage, but that’s only when they can manage to hit you and you have a lot of meat to replenish your health anyway. Adding more of the quick time events would break up the monotony I believe and maybe throwing in some minigames as well. I do believe that there are some included in the title, but they either didn’t make it into story mode or the quick time events count as minigames. Either way, I wasn’t curious enough to check them out.

Overall, At World’s End is a fun little game. It’s the definition of a weekend rental from Blockbuster. You’ll have a good time playing it, but once you complete the game, there is no reason to keep on going. You can always find better games if you really want too so the initial play through is all that you need. The production values in this game are impressive so if you don’t own the game yet, then I’d recommend picking it up. You can definitely get it for a pretty good price at this point. I have a few games that I’m working on at the moment so I probably won’t be playing the sequel for a while, but it is definitely drawing closer now.