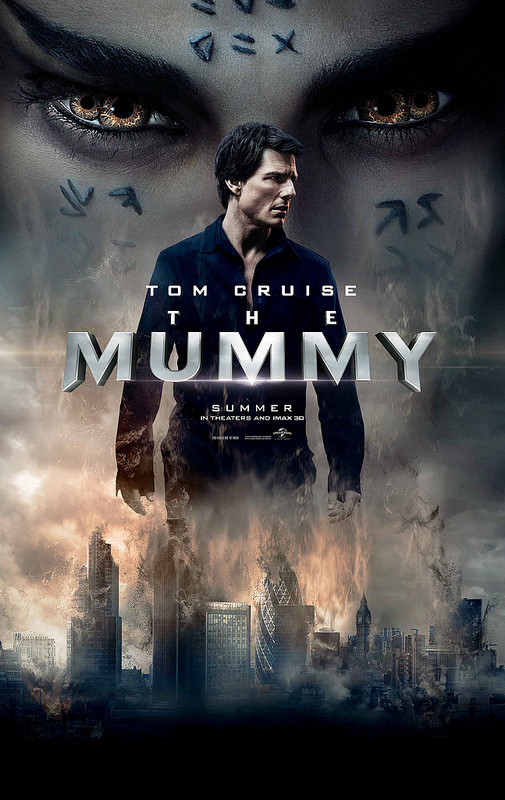 It’s time for the first film in the Dark Universe cinematic universe. Unfortunately it starts off with a complete flop. Mummy hits all of the wrong notes throughout the film and negates whatever presence and intensity it may have had. I can respect its reliance on jump scares as it has well over a dozen of them, but none of these moments were actually effective and it just goes to show that relying on horror tropes won’t get the job done. It’s also unsure whether it’s an action or horror film which adds to the confusion. Ah well, this isn’t one for the history books and you should stick to the last Mummy series.

The film’s about a thief named Nick who releases Princess Ahmanet from her prison. He doesn’t believe in Egyptian curses or anything like that and just saw it as a way to get rich very quickly. Unfortunately, this leads Ahmanet to pick him as her chosen vessel who will be possessed by Set and help her rule the world. Nick’s partner is destroyed in the process and becomes a ghost who blames Nick for his death and loses his mind half the time. Seriously, the guy can never decide whether he wants to be friends with Nick again or just destroy the guy. Meanwhile, an archaeologist named Jenny is in danger since Ahmanet doesn’t want Nick to have any friends who could become rivals. Can this human take on the Mummy? There’s also an Illuminati led by Henry that specializes in destroying supernatural forces. Hopefully they can help out a bit…if they’re not evil or super shady.

This movie has a long list of problems so lets start going through them. One of the biggest problems is..you guessed it…animal violence. I had to shake my head here since we start with Crows being tied down and end with masses of them being forced to suicide by the Mummy. I don’t think these scenes added to the movie and were just here as shock value. It’s a shame that it already started the film out on the wrong note, but things continued from there.

Ahmanet’s main attack is that she’ll kiss people to death. Is this what the Mummy has been reduced too? See, this is the problem that Hollywood keeps making. Why does the female Mummy have to attack this way instead of through sand attacks like every other Mummy? She also happens to be a very weak Mummy as she loses to a few stun guns and a net towards the middle. In the climax, she goes down in one hit. Did I mention that the climax is very anticlimactic and there is no actual fight? It’s a shame since the film hinted there was going to be a cool fight with super speed and epic effects but no, the kiss of death was activated. Ah man, a certain action hero better not keep that as his main attack. That’ll be brutal.

Ahmanet’s not a bad character, but she really wasn’t used well. I’m honestly not a big fan of the design myself as I’d prefer a normal look, but that she has the ability to turn to sand at will. Think Sandman or Crocodile. (One Piece) Her sand abilities were fun though so I wish she had gotten to use them more. She’s a total villain despite the film practically begging you to root for her at times. There just aren’t any real heroes in this film.

Another issue I had is that the Illuminati is clearly evil. I expected the movie to go this route, but they went as far as possible with them deciding to punish Ahmanet with a living, very long drawn out process of mummification. Basically they’ll fill her with mercury which sounds like a pretty painful way to die. Henry is also insane as the leader and the film doesn’t hide this at all so I may as well say that he’s the famous Mr. Hyde. If he doesn’t have his drugs constantly, he gains very mild super strength and poorly handled effects. It reminded me of an old film I saw a while back where the main character’s hair changed for when he’s evil. It’s very similar and poorly handled as well. Henry is the worst character in the series. If you have to choose between an evil organization or an evil Mummy, it’s probably best to just choose yourself and fight everybody. I’m on Team Cruise in this case.

The Mummy also couldn’t resist throwing in some poorly handled romance and dialogue. The banter between Nick and Jenny is painfully bad and played out. It’s all dialogue that we’ve seen before and doesn’t add anything to the film. We don’t need to see Ahmanet constantly throwing off her robe or stripping just to make deals or give people dreams of the future. We don’t need the same flashback a million times of her about to stab someone and then get stabbed herself. Murdering the baby once was enough, we don’t need to repeat that. All of the repetition just made each scene worse and worse as if they weren’t poorly handled enough the first time. We should stray away from child violence and baby violence as it is. No need for any of that here. So, to get this straight, Ahmanet was used for romance and fanservice a lot and was fairly weak for a Mummy. Like I said, the character wasn’t used well at all.

Then there’s Nick. He’s not very heroic as he was close to ditching Jenny a few times and he did steal from her after their hotel fling. Nick also decided that riches were more important than stopping the rebels or investigating the area like he was supposed too. Don’t worry though, Jenny tells us that he is a good man at heart so we’re supposed to believe that. His personality was also a little intriguing as he had the classic Cruise wit and fast talk down like you’d expect, but then he’d also get shaken a little easier. His conversation with Henry was just weird in that sense as he started stammering a lot like “Cure me right Doc? I I I’m ready….cure. You’re gonna cure me? Right? Lets do it. Lets do it Doc. Doc?” The lines were just really weird and scrambled during that scene and I thought it was because Set was starting to control him or something, but we learn that he had no influence until Nick was stabbed so…it was just random.

I didn’t care much for Jenny either. She wasn’t much of a fighter and her lines of “Get him off me” when the zombie broke into the car just illustrated that she wasn’t going to do anything about it. It was Nick’s job to get them away and she only “helped” by kicking him in the face for it. She sold Nick out to the evil organization as well and just never became likable. I actually preferred Nick’s partner which is saying something since his whole role was to panic constantly until he died. He was also odd to me as I mentioned before. He seemed to lose his mind when he tried destroying everybody but then he got it back. Somehow he kept his free will I guess after he had settled down, but why? Everyone else was a crazy servant and then he almost got Nick run over by a car. Nick just shouldn’t trust this guy, but it seems like he’ll be sticking around for the long haul….great.

This is a modern movie, but it doesn’t really have a modern soundtrack. There’s not much to it this time so the film fails on that account. The scenery isn’t bad when the characters are in the city. I do like cities for action films like this one and the underwater caverns weren’t bad either. The desert scenes hold it back to an extent though along with the flashbacks. Not to keep grating on this point, but 3 random guards were able to hold the Mummy down after she was given her powers? I dunno about that. Maybe the powers hadn’t sunk in yet, but I would have expected her to win that round.

That’s not to say there were no positives to be found here. The film is reasonably fun. Fun doesn’t go a long way when it comes to the score, but I don’t think you’ll really be bored. Something is usually happening at the very least. While the chase scenes aren’t very inspired, you do get to see Nick take down a bunch of zombies. There are some fun parody moments as well like when Nick tries to approach the Mummy and gets slapped or punched through a few walls. People got a chuckle out of it the first time. The film made sure to use that scene a few more times, but it was met with deafening silence on the re runs. Usually you don’t want to re use a joke more than once. It was good that the film showed the Mummy had super strength…it’s just too bad that it vanished when it counted. I am glad that the film didn’t cop out though and the Mummy had the edge over Jenny. I would have had a hard time believing that she could last very long against the Mummy at all.

Finally, I have to take another shot at Henry’s plan. His big plan…is to give Nick unlimited power and then destroy him before he takes them down. That’s such a flawed plan that it hurts. The instant Nick gets those powers, he could probably use super speed to get away or just activate some mystical ability to blow them all away. It just seems to risky, wouldn’t the better plan be to just destroy the jewel? It’s apparently very delicate as a quick bump can break it. There’s not much that the Mummy or Nick could do without it so that’s the optimal plan. No risk and the day is saved. That’s why if Henry is supposed to be this world’s Nick Fury, then we’re doomed. He’s just not all that intelligent.

Overall, I’m a little worried about the Dark Universe. The premise of it still has a lot of potential. Nick should play a big role and that should be interesting as he is a charismatic guy. That being said, most of the monsters haven’t aged well. I can’t imagine the Werewolf, Frankenstein, or Dracula even being all that interesting. Maybe the films can change my mind but based on how they handled this one, that could be a long shot at best. You should definitely skip this film and stay far, far away. It’s just not a good movie.