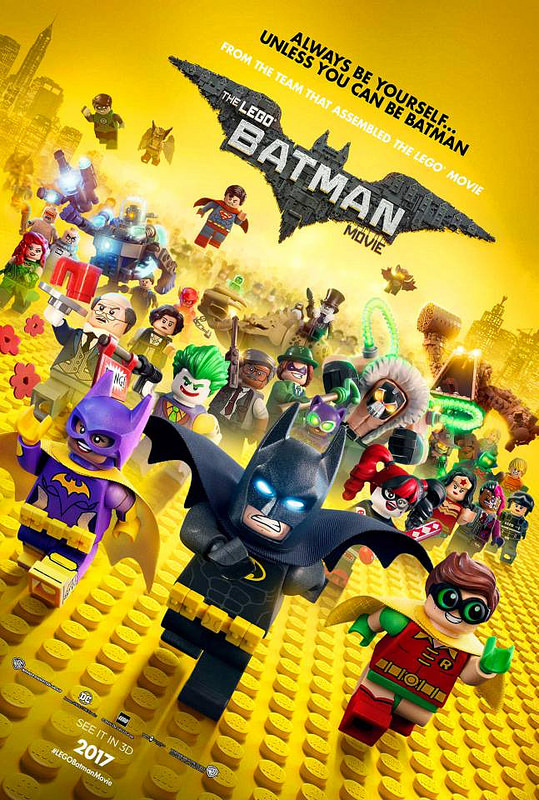 It’s time to review the recent Lego Batman film that was in theaters a while back. This movie got a lot of hype as one person even told me that it was the greatest comic book movie of all time. Of course, that person didn’t enjoy Man of Steel or Batman V Superman so some credibility may have been lost there. It’s a fun film and has fun going over the top with the Lego visuals. Despite the epic action scenes, some of the jokes don’t work as well as the normal shorts as they are reused and stretched a bit much. It’s a fun film, but one with the typical flaws of turning what could have been a 30 minute Lego short into a full length film.

The film starts off with a pretty intense action scene as Batman reminds the world why he is the top crime fighter around. Joker has amassed an army of villains who obey his every order and he wants them to shut down Gotham City. Batman manages to defeat all of them rather effortlessly but also hurts Joker’s feelings when he admits that Superman is actually his greatest enemy. Joker decides to retaliate by destroying the city and hires some pretty notable figures like King Kong and Sauron to help him. Batman may need some help from Barbara and Robin if he’s going to survive this, but will he ask for help?

I was glad that Batman pointed out all of the tropes that companies use when starting movies. The ominous music and long logos always do seem to be a staple and starting the film out in all black is probably one of the more annoying ones. It shows that the film is trying to win an Oscar instead of trying to make a movie. Batman points all of this out and then gets to work on wrecking everyone. As always, his voice is perfect for the character. He gets Batman’s serious nature across and delivers his lines without sounding like he’s going to laugh.

Batman has looked great in the Lego films and for the most part this one is no exception. He’s as overconfident as ever and is even more of a loner in the Lego films than he is in the main ones. It’s the Batman that we wanted and the one that we deserve. He conquers overwhelming odds and doesn’t learn the teamwork moral until the final 15 minutes so he lasted quite a while. Yeah, Batman was basically on point. The only trouble here was his rapping gig on the side. That just felt a little out of character and was a new twist that I couldn’t get behind. Seriously…lets not bring the singing in. That just doesn’t feel right if you ask me. The songs are bad on purpose…but it doesn’t work.

Keep in mind that I’m just talking about Batman singing. The film had a lot of retro songs that worked fairly well. Remember Rick Astley’s “Never Gonna Give You Up Never Gonna Let You Down” song? That one makes a cameo and it was brilliant. Batman chose another song instead though. Ironically I couldn’t actually hear the one he chose though because the sound effects were way louder than the movie. I can only imagine how hard it would be to hear the music in the theater with the sound effects bashing away at the walls. I’m pretty cool with that though as they brought the Adam West visual effects back at long last. That was pretty sweet.

The Lego graphics are also on point. It’s still Lego so it falls short of the average animated movie, but I feel like they brought the style to the height of what it can do. The cool Crisis City vibes I was getting from the climax made it that much more intense. The opening action scene was also really fast paced and visually interesting. At times it felt like the film was on 2x speed with how quickly everything was happening. That’s a good thing though as it made Batman’s skills appear to be even more extreme and hype.

Lets talk about some of the aspects where the film didn’t fare as well. It all starts with the Joker. His whole plot about wanting to be Batman’s greatest enemy starts off as annoying and very quickly turns cringe worthy. It ends up overriding his entire character as every single scene with him on screen is about that. The film goes way too far with its obvious parallels here and Batman is ultimately forced to admit that Joker has earned the title. Even if it could have possibly been funny for some, the joke drags on for way too long. It just keeps coming back over and over again well past the point where you just want it to go away. It really hurt the film in my opinion and was the biggest detriment to it in the end. The film should have just kept on focusing on the absurd parts of the film like the opening with the bombs over the city. That’s the film’s forte and it needed to remember that.

I can’t say that Robin was very likable either. He goes from being a big Batman fan who is fairly timid to just rummaging through Batman’s stuff without permission and messing with the guy. Where was the respect? He just ends up getting in the way a lot of the time and while I was glad that it gave us an excuse to hear Batman’s useful life lessons, Robin could have been a better character. Most of the humor with his character didn’t work well either. You know what the problem is? Batman’s the only character here who understands humor. I’d wager that over 90% of the jokes that worked in this film are the ones that Batman used. That’s just a guess off the top of my head, but I wouldn’t be surprised if that was the cast.

At least Batgirl was pretty good. Once she takes over as Commissioner she begins to take names. She did a good job ob taking down all of Batman’s most dangerous enemies without breaking a sweat. She may have taken all of Batman’s insults and attempts to get her out of the action a little too personally, but at least she could fight. From all of the supporting characters, she was easily the best. Alfred wasn’t bad either, but he spent more time trying to shut Batman down and get in his way than actually helping. Also, am I the only one who thinks that the group was way too ungrateful to Batman after he saved their lived from the Hollywood villains? He could have just not done that and they’d all be broken like the cops that he smashed at the prison.

The Justice League makes a nice little cameo. It’s fun to see them all around and while it may have been a little mean of Superman not to invite Batman to the party…Batman did say that they were worst enemies. I suppose Superman is just trying to live up to the title. I was kind of expecting him to show up at the end, but I suppose he wasn’t needed this time. The climax was already really explosive and intense anyway.

When it all boils down to it, I think the film had a stronger opening than ending. As I mentioned earlier, the first part was really on point with Batman taking names and then Bruce Wayne pointing out how awesome Batman was. Grabbing a glass of water just to dramatically spit it out is a classic Batman thing to do. The second half just got a little confused with all of the extra characters and the whole Joker plot when in reality it should have focused on Batman. I think the problem may have been the length. A lot of the DC Lego films are roughly 70 minutes at this point, but this one was closer to 90 I believe. Maybe they just couldn’t fit in all of the extra time. The plot is fairly basic after all so it could have been done a lot quicker.

That being said, the pacing was pretty good. Something is always happening so it’s not really a lack of ideas. It’s just a lack of focus. Maybe they thought people would get bored if Batman got too much screen time and wanted to include everyone. That didn’t work so well as you might expect. I admire the effort though and I am glad that this got to be in the theater. It’s pretty surreal to see Lego Batman actually get mainstream as people saw it in the theater. Not bad…not bad at all.

Overall, This wasn’t a bad film. It had its good moments and while it struggled a bit, the goods outweighed the bad. The Joker plot may have shed the film a star or 2, but Batman’s strong performance keeps the film on the positive side of the spectrum. If we get a sequel I’d like to see Superman get more of a role and the two characters can duke it out. This is a rare time where I’d like the character development to revert as well so Batman is a solo act again. That being said, since his personality didn’t change, they could also just come up with an excuse to have the other characters just be on vacation or something. I’d recommend checking this film out if you haven’t already. Otherwise, you should check out some of the earlier specials as the action is just as good, but you’ll also see a higher level of witty banter between the characters. The wit is what makes or breaks the Lego films after all and DC seems to have a knack for it.