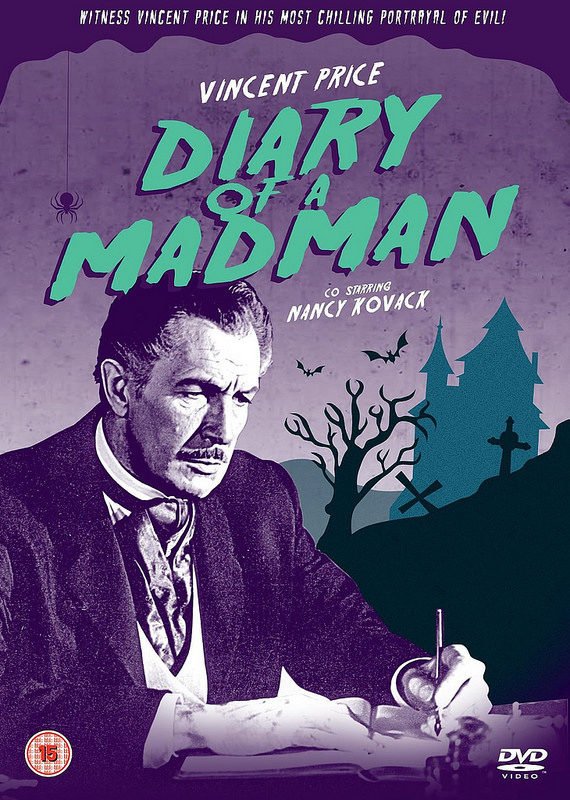 It’s time for a tale of Man vs Demon. Force of Will vs Temptation. Justice vs Vengeance. Unfortunately, the hero is a guy named Simon who doesn’t have a whole lot of will power to defend himself with. What follows is a painful adventure where Simon is wrecked at every corner and the Horla gets to have his way. It’s not as bad as it could have been, but I’m afraid that it’s not a good film regardless.

Simon is a judge but his life has been empty lately. His wife ended up destroying herself a while back and ever since he has thrown himself into his work. It’s just not enough anymore though and his possessions keep getting flipped around even though the butler claims innocence. Things come to a boil when Simon destroys one of the criminals who was going to be executed. The demon that was attached to the guy transfers over to Simon. He now wants Simon to murder everybody and follow his commands so that he can be provided with some entertainment. Simon struggles against him, but this seems to be futile.

I guess one of the main issues that a film like this one will have is that the hero’s lack of willpower gets to be annoying pretty quickly. Simon tries to resist, but then the Horla just takes physical control of his body and makes him murder people. The instant Simon lost the mental battle, you could say that the film lost as well. The demon is just stronger than Simon so clearly there can’t be a battle anymore. It’s not like Simon can take a do over. He’s already murdered someone. Naturally the film makes sure that the victim was cheating on her husband so you aren’t supposed to feel as bad for her, but it’s still a rather gruesome fate.

The scene is rather violent and the film definitely shows that it can be dark when it wants too. We also get some animal violence right on schedule when Simon is forced to destroy his own bird. Game Set and Match for the film. You’ll just be interested in seeing what form of plot hax the film will use to have Simon turn the tables on the Horla. Unfortunately, the film doesn’t even try to make it all that believable. So, the Horla is essentially the invisible man. The film doesn’t seem to be too confident on what his powers are. Can he teleport? Move really fast? I mean, you’d think that he can go through walls based on how he appears to be everywhere, but he can’t in the climax. So, we’ll go through this next paragraph assuming that he has no powers aside from hypnosis and invisibility.

The big plan is to douse the house in gasoline, lock all of the doors, and close the drapes. Once the Horla walks in the room, Simon will fling some fire bottles at him and take the whole house down. Now, here’s the problem with that scenario. Up til now the Horla has been spying on Simon 24/7. Even if we assume that he went out for a late night stroll for some reason…how long was he gone? Did he not notice that Simon had made all of these preparations before walking in? Was he not able to break through simple curtains or the locked door? The villain apparently panicked as he couldn’t even be bothered to destroy Simon first or grab the key. I get that he’s scared of fire, but I had some trouble believing that this trick would work. If anything, Simon’s strategy to take a train out of the country had a better chance of working since if he had gotten on the train he would have been out of reach for the Horla. Well, I suppose we’ll take this plan over nothing.

Technically you do know that Simon is doomed right from the start as the film opens with his funeral. The rest of the story is simply a long flashback as we learn how he went insane. Of course, he didn’t actually go insane, but since he let a spirit control him so easily he may as well have been. Meanwhile, he wasn’t a pleasant guy from the start either. He flirts with a married woman and even if he didn’t realize that she was taken at first, he made no attempt to stop being with her once he found out. The whole message of moving on past the wife’s death and straight into rebound territory was also a little tricky. He met with the lady for about an hour and that was all it took for him to fall for her. It all happens so fast in these films that you can see why so many rebounds are always happening.

This isn’t exactly a 0 star film though so there are some positives. The scene where the cross scares off the Horla was pretty good. It was nice to see that at least someone had power over him. Too bad Simon didn’t take the hint and instead of hiding out in the church or buying the cross….he went right back home. Another solid for the film is that the writing is fairly decent. Simon was a likable character for the first minutes of the film as he goes to the prison and tries to learn about the criminal mind. He goes downhill from there, but overall the writing wasn’t all that bad. It’s just the direction that the film went in which didn’t work out so well. Also, if someone ever asks you to model for them, it’s probably a good idea to say no. That job always seems to end badly in films.

Overall, Diary of a Madman is a pretty mean spirited film. There’s no real enjoyment to be had from it. Is it really fun to see a spirit tormenting the main character throughout the whole film as he forces him to murder people including his potential future wife? Then we have the animal violence and Simon giving into despair. The ending may give Simon the last laugh, but more literally than you’d expect. I have no problem with it, but just another example of how they couldn’t even grab a happy ending. I think you can definitely do much better than this film if you’re looking for a good thriller so I’d advise you to skip it. If you want a film where a character has to combat good and evil, check out Advent Children. Cloud finally realizes that he can hope again by the end and even while he was downcast he never did anything unforgivable and still always tried to help out. That’s just the kind of guy he is.