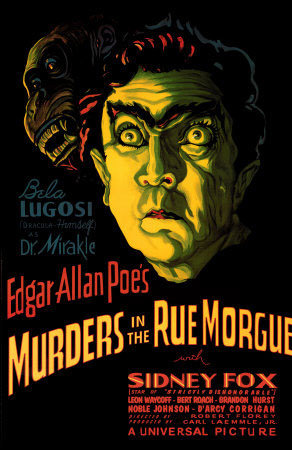 Whenever you watch a few good movies you get this feeling in the back of your head that a stinker is probably coming soon. Whether it be in the form of an old Oscar bait title, a classic that hasn’t aged well, or a new film that tried too hard to be edgy, it’ll come. In this case, it’s none of the above as I doubt this one would be called a classic as I’ve never heard of it. Unfortunately it is still as terrible as you’d expect and you’ll find it hard to sit through this film. It’s a good chance to catch up on your stretching though.

So the film starts with a classic mad scientist going around murdering everyone. He works with a circus as a cover and has a trained monkey. Well, it’s not really trained as it tries to strangle people, but we’ll ignore that. He wants to cross the DNA of the monkey and a human but everyone he murders doesn’t have the right blood type. Finally, he decides to attack the main heroine during the night. Can she stop him? After all she can’t rely on the main hero who is busy telling crazy stories about a monkey murderer to the sleeping cops!

There’s really nothing to like about this film. It’s rather violent and dark throughout. There are no happy scenes in the film and everyone is wearing a virtual red shirt that’s so bright you can’t even see their character through it. You just know that they’re doomed. The film has animal violence and torture. Truly a losing combo if there ever was any. I don’t even think the writers were worried about the plot, they just wanted to get this on screen. It’s like in debates where one guy wants to get his signature quote in no matter what the context so he just says it near the end even though it’s off topic. That’s basically this film.

The main guy is pretty slow on the uptake as well and isn’t very smart. When he runs to the cops he decides to immediately start rambling about the monkey even though it’d be smarter to just mention the evil scientist instead. He knows who the guy is so he could have mentioned the name, but no. He wants to talk about the monkey. Naturally the cops don’t believe him and the other witnesses are no help as they debate about languages. You gotta love their passion though as they attack the other witnesses and the whole thing makes about as much sense as someone grabbing a budlight instead of a Pepsi.

There’s also the overweight roommate of the main character who likes to make macaroni and then complain about it. That’s his complete character arc and the scene lasts about 10 minutes too long. I also have to point out that it’s a disturbing trend of films showing characters eating from the pot and then putting the spoon back in. Just about every film does this and it’s always gross. Have they not heard of the no double dipping rule? When you’re making something for guests or sharing a dipping sauce, the whole point is that you want to keep it clean. So, if you’re all dipping french fries in the sauce, you only dip once per fry. That’s because if you bite into it and then dip it in, you’ve just wrecked the sauce for everyone. The same rule applies for meals. If you taste the soup to see if it’s ready, don’t put the spoon back in. Now the whole thing is contaminated. It should be common sense but you’d be surprised at how many people mess this up. Honestly that’s one of my worries whenever I go to a restaurant, but fortunately most of my dishes aren’t the kind that people have to taste to see if it’s ready. Nobody messes with my pizza!

So, the film can’t even get basic writing down. Usually old films at least have good writing, but there’s none of that to be found here. I’ve seen better writing in the old Bazooka gum slips. At least those would have a good punchline or some kind of entertainment. I’m gonna start to go in circles if I talk about this film for much longer. You don’t really need to know much else about it. Even the characters are all one dimensional and forgettable to the point where you’ll forget them all instantly. You’ll begin to wonder if there were any characters on screen at all or if they were all simply poorly constructed puppets.

Overall, This film is one you’ll want to skip. I’m starting to wonder if Poe was actually an incredibly overrated author as this is probably the 4th or 5th story I’ve seen adapted from him that was actually pretty bad. I wouldn’t be surprised though as a lot of the mainstream authors aren’t all that good. We can’t forget LOTR after all. What we need is a return to quality for books, but it’s hard to know where to start. I suppose there’s not much you can do with horror either as I haven’t seen all that many good ones. There have maybe been 3-5 good ones out of over 100 that I’ve seen so those are terrible odds to be frank. The only question this film left me with was if it should get 1 or 0 stars. Both are tempting options. Eh, there really wasn’t anything good about this film so lets plunge ahead and give it the 0.