This review is of the edited TV-14 version of the film. All thoughts below should be addressed as such. A review of the unedited version would likely be far harsher. 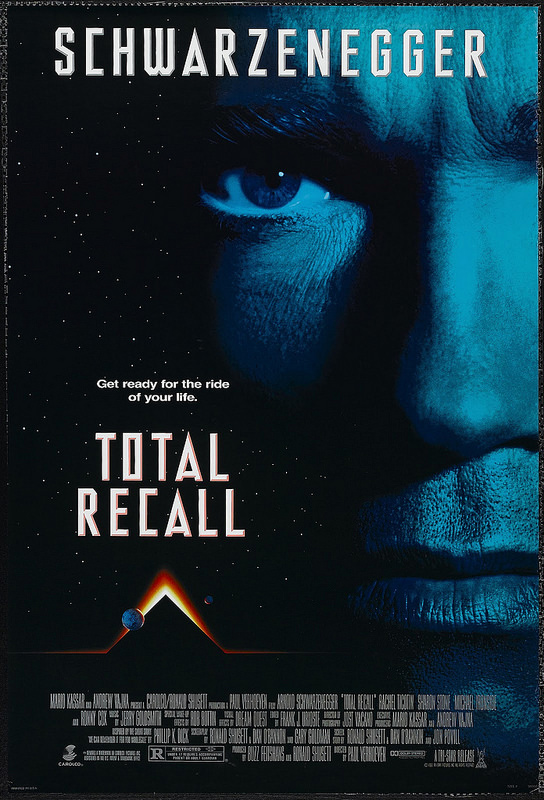 It’s time for an old action film. I mean, it’s not that old compared to some of the films that I’ve seen, but 1990 is definitely not in the current decade anymore. It’s definitely an exciting flick where the thrills never stop…but it’s not a good movie. Think of it like a classic horror film or an engaging zombie thriller where you’re entertained and invested while watching it, but afterwards you still admit it was a bad movie. This film makes far too many mistakes for it to get anywhere near a positive score, but at the very least you won’t be bored.

Doug is your classic film protagonist. He wants to leave his construction job and head to Mars. Unfortunately, there is a bit of a civil war going on there with terrorists constantly launching attacks and destroying civilians. As such, Doug’s wife rejects his request. Doug decides to do the next best thing, pretend to go to Mars. He had to a memory altering place so they can implant the fake memories. Unfortunately, the procedure doesn’t work as planned when Doug’s memories of the past come to the surface. Now everyone wants to murder Doug while he finds a recording of himself saying that he is a hero. Doug has to go to Mars for real this time and save the planet. Does Doug have what it takes to accomplish this mission?

While the film is action packed as I mentioned, it does have a very boring intro. The first 10-15 minutes feel like something out of a romance film as the characters exchange very poorly written dialogue with each other and everyone in the audience cringes. We finally move past this brutal intro and the film really starts once Doug has the procedure. You have to question what kind of guy Doug is even before it though. The memory altercation is essentially a way for him to cheat on his wife without actually doing it as he goes on a spy mission and has to do a lot of edgy things. Why do they have to make the leads so morally dubious? Couldn’t Doug have chosen the happy pizza salesman option or something instead of the double agent? It’s hard to be too sympathetic to Doug from the start.

Anyway, the fast paced nature of the film is pretty good from here on out. We get the classic chase scenes where Doug is chased by the villain organization. Fortunately for Doug, he knows how to use a gun and can handle himself pretty well. He makes use of an illusion device to get the drop on the villains and Doug is effectively a one man wrecking crew. He destroys dozens of guys on his own. He also doesn’t tend to backup from any threats as he fears no one.

I thought the soundtrack was fairly good. Not downright amazing or anything, but I recall enjoying it during the film. It wouldn’t do to have low budget themes during a big action scene right? The effects also hold up decently well for the overall landscape and gun design. There’s not much room for it to actually shine since by and large the place looks pretty realistic even though it’s the future.

Time to start looking at the negatives now. First of all, the film is incredibly violent. It tries to be grotesque whenever possible and playing the maximum grit card. Characters get burned so hard their eyes start popping out. Others have limbs getting severed or are blasted full of holes. The characters who survive get deep cuts into their skin which the film tries to show as much as possible. There’s rarely any happy scene aside from the main character as everyone has to suffer from being trapped without air or burned. There are no alternatives. If you try to help the main character, you’re probably doomed.

There’s also animal violence to look out for. Poor rats are shot for absolutely no reason and then a bunch of Goldfish meet a similarly fatal fate. There’s no reason to get the animals involved and that’s just poor writing. Speaking of poor writing though, the script is absolutely terrible and would fit in with the average horror movie. The amount of language in this film is crazy. Fortunately the TV airing I saw managed to air them all out, but with how often they had to do this you get a pretty good feeling on how much language was there. It’s a crutch that lesser writers use to make everyone sound edgy and realistic. In actuality, it just makes the film look amateur-esque compared to the big hitters. I’d expect nothing less though.

It also feels like the stories that take place in the future always focus on the wrong aspects. Instead of looking at how we’ve changed the world with science and how our weapons are better, it focuses on how society is more deprived now. We have very sketchy bars that have survived and they’re always about messing around instead of ordering a good burger. This film isn’t the only one guilty of it, but it doesn’t help to mitigate the damage either. These scenes are pretty bad and the romance in the film is laughable at best. The only thing the film was particularly good at was the action scenes and even those were wrecked by the gratuitous violence. The film should have quit while it was ahead, but then it would only be about 30 seconds long since it opened on a bad note.

The head honcho of the villains was fairly decent in his role. He just wanted to make a lot of money and keep up his success. Naturally he’s evil and all, but at least his reasoning for why he was evil was more original than some other villains. His main lackey wasn’t the greatest though and always got humiliated whenever he’d appear. Technically he is a competent fighter..it’s just that Doug is better. I didn’t like the leader of the rebellion, but his design was also pretty terrible once again just to mess with the film. The main heroine was all right I suppose but she didn’t have a lot of time to do much. At least she did well against Doug’s fake wife.

Overall, the reasons above are why the film’s just no good. It ultimately crosses the line from epic to edgy and it does this with no remorse. I certainly wouldn’t recommend this film to anyone and you’d be better off watching Jingle All The Way to see Arnold get into some good fights without worrying about the negatives. I don’t have a whole lot of hope for the remake either but surely it should be a little better than this one…..right? If not, maybe the film needs to try and focus on the whole concept of Total Recall a little more instead of everything else. Being given fake memories could be pretty cool, but that part never really happens at all. The film tries a misdirect at one point that the whole thing is fake, but I don’t think you’ll buy it at that point. I do have to give Doug some credit there though. He absolutely never believes the villains and always laughs at their attempts at a plot twist. He usually does get convinced or almost convinced once they activate their feigned outrage and start to show him videos, but he starts out on a solid note. I feel like there is a good and engaging movie hidden in here somewhere, but it just never broke out into the light.