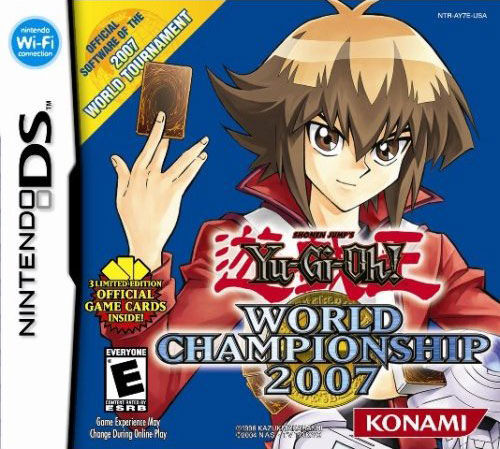 It’s been a long while, but now I can finally jump onto the next installment in the Yugioh World Championships. I believe I am only missing around 4 of them now. The games lasted for quite a while back then and it’s a shame that they’ve stopped. Imagine how many cards a World Championship 2017 would have had. I suppose that with Duel Links the franchise may be wondering how they can top that, but I’d still like to see an attempt. While I prefer humanoid opponents to monsters in the WC series, this game holds up as well as any of the others. It’s pretty well optimized and the load times are nonexistent so that’s a win-win.

The main mode you’ll be playing here is the campaign. Essentially you start off at Level 1 where there are 6 opponents. To unlock the next level you must defeat each opponent 5 times. Fortunately this is now the only requirement to unlock the next level as previous games forced you to achieve a specific victory ratio. That required you to keep on resetting the game right before defeat which was tedious so this is a big improvement. There were opponents in this game that I had a losing record against so I am definitely glad that I don’t have to worry about that now. It makes gathering money a little easier since you actually get to keep it even through defeat.

There are 5-6 levels in the game, but only the first 4 are accessible without having to enter other modes so that’s where I stopped. My final record at the end was 96 wins and 88 losses which isn’t so bad if you ask me. I was just glad to stay above a 50% win ratio so that was satisfying enough. This main mode will likely take you at least 10 hours, but it’ll certainly depend on the deck that you create. Naturally there is a large amount of luck involved on which cards you get and such, but mitigating the risk is part of what makes you a good deck builder. Try to build a lot of combos into your deck so that no matter what you draw it’ll be a good one.

I focused my deck on Elemental Heroes. Sure, it may be borrowed from Jaden, but that’s exactly why I went with the deck. If it was good enough for him to wreck everybody then it’s good enough for me. I added in some extra spells and traps to make the deck a lot easier to counter with so at times it did backfire. Let me say that getting a hand with all traps and no monsters is no good. You always want to have a monster ready to summon or you’re really going to be in a pickle. At the same time, the final opponents all have very cheesy summons and combos so having a trap that automatically destroys the monster and wastes the last 5 minutes of their effort is a must.

The graphics are pretty clean. It’s not as if they’re doing anything too special but it’s easy to look at. The duel field isn’t cluttered and it’s always easy to see what is going on. As for the soundtrack, it’s okay. I think Tag Force has spoiled me a little as the themes there were just super awesome throughout, but the peaceful World Championship score isn’t bad. Honestly I’m usually way too focused on playing my trap cards and going through memes in my mind to actually notice it all that much.

It goes without saying that there is a ton of replay value in this game. After beating all of the main opponents you can go to the other modes that I referenced earlier. One such mode is the Limited Duel. Essentially you have to beat an opponent while adhering to certain limitations. Another one is the Duel Puzzle. You’ll be thrown in the middle of a duel and have to figure out how to win it in one turn. Despite the fact that there are only so many ways you can play your turn, this can actually be extremely difficult. Seriously, don’t underestimate just how tough this is. It’s pretty entertaining though so while it’ll take a while, you’ll have fun trying it out. Honestly it could probably take you as long as an RPG’s game length to tackle everything in this game. I won’t even count collecting all of the hundreds of cards since that would be even crazier. I have around 400 cards and I don’t think I’m even halfway there yet. Not to mention that you buy them lottery style so there is some luck at play there.

You couldn’t really ask for a better Yugioh simulator. Since the game even has mini animations for the big monsters, you really feel like you’re in the duel. The music will also change if you destroy your opponent’s ace monster. As I mentioned, the controls are really smooth so you’re not going to attack the wrong person by mistake. The turns are pretty quick so it’s not as if the long loading times exist to deter you. The amount of cards at play is also pretty good and earning money is quick so you are always ready to buy your next pack. As such I don’t really have any complaints for this game. A minor nitpick would be that I’d prefer to have fought some of Jaden’s opponents from the show instead of generic monsters. The classic Yugioh games all had you fight with iconic characters like Kaiba and Pegasus. There weren’t cutscenes or anything, but at least it would feel more like you were fighting an actual opponent. As you went up the levels you would fight stronger/more popular fighters. Here…I guess having Cyber End Dragon in World 4 makes a lot of sense, but I didn’t even know a bunch of the other monsters. It was just an odd change although the last Yugioh GX game did that as well so maybe it’s just GX’s gimmick or something.

One of these days I’m definitely going to have to make a list where I place all of the Yugioh Games from best to worst. Such a list would be super hype and perhaps I should make that an article. Keep your eyes out for that even if it may not have the clickbait headline that I usually try to have accompanying it. The highest game for Yugioh on my backburner is Duelist of the Rose, which will likely come up pretty soon. It technically is pretty short since there are only about 7-8 duels as opposed to close to 200 in this one, but I’ve heard they are super tough to compensate for that.

Pro tip for when you fight the opponents. Stalling them usually won’t work. I was able to really take advantage of that in the Wii game, but here they always have some kind of fancy combo to wipe the field so they can usually outlast you. If you have the edge in battle, just throw out an attack. Odds are that it will succeed and you’ll be glad that you did. Surprisingly most opponents don’t have a trap card to punish your attack in the later levels as mostly it’s just the intro opponents who will do that.

Overall, If you’re into Yugioh, then this is a solid game to get. My personal favorite World Championship game may still be 2006 because I felt the gameplay was the best from all of them, but I also may be bias because that game had my favorite deck. I went through all of the options for hours in that game and finally came out with a really hype fire deck. Every card had a lot of power behind it and I cruised through the game. Still, I made a pretty solid deck in the end through this game as well and it would be fun if I could fight myself with it. 2010 is also a pretty great title since that one did actually have a main story as well. I’m not sure which WC game I’ll get next, but 2005 is definitely the cheapest one which sounds good to me. I believe it is the final classic Yu-Gi-Oh title that I have not purchased yet.