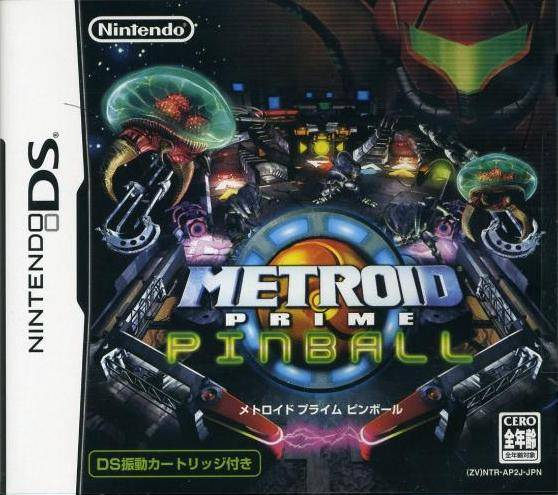 It’s been a while since I played a Metroid game so what better way than to go back and finally check out Metroid Pinball? I’ve had the game for a long time, but the cartridge never worked. Well, it finally did so I wasted no time in scoping it out before it decided to break again. It’s a pretty solid Pinball game that fans of the genre will enjoy, but it’s not as if the title does a whole lot with the genre. Effectively it’s just the same old Pinball with a new paint job.

There’s not really a plot here although there could have been the first time around. See, I got this game used so it was already completed. For the sake of the review I just went through the level select and tried them out. It’s not as if there are a lot of levels so it was pretty easy. There are only 4-5 levels if I’m remembering correctly. There are actual bosses so that’s pretty neat. It means that there is certainly some kind of story here. I’ll assume that Samus has been charged with destroying all of the Metroids in her way.

If you don’t know how Pinball works, effectively you have a ball inside of a field and you have to keep it there as long as possible. You control two flippers that you use to block the ball from exiting the field. The longer you survive, the more points you get. There’s also a layer of strategy as you try to hit the ball at certain angles to get your points as quickly as possible. That’s how all of the normal levels play out, but with the Metroid background. This means that the levels are very tech based and there are even Metroids running around. You even get to turn into your robot mode to blast away at them once in a while if you hit the right switch. I think that could have made for a good game to be honest since those segments were always a lot of fun.

The graphics look pretty good. I feel like the company actually put quite a bit of effort into this one since the character designs are on point. You really feel like this is a Metroid Prime game and not some pinball game leaning on its legacy. The soundtrack is also quite good as a result. This game definitely benefited from the fact that it is from the Metroid Prime series as opposed to simply being a Metroid title. Since Pinball is fairly passive the matches can take a long time. While waiting for the ball there isn’t much you can actually do so it’s nice to at least be able to listen to good music in the meanwhile.

Back to the bosses, the gameplay for those is still like normal Pinball except you want to hit them with it. They’re not all that difficult but you’ll still have to get used to the ball and knowing where you’ll hit it before you can claim victory. At least there really isn’t much luck involved here as it’s all in the angles. In a rare occasion the ball will land perfectly in the middle so you can’t block it but that is extremely rare.

There’s not a lot of replay value depending on how you look at it. I mean, it’s Pinball so technically you can play it forever, but there aren’t a lot of game specific reasons to keep on playing. You can beat the “story” in 40 minutes and even if the levels take you a while it won’t be longer than a few hours. You can keep on trying to beat your high scores, but there just isn’t a lot of content in this one. It’s one of the reasons why I don’t own many Pinball games. It’s one of those games that’s a little more fun in real life than in a game.

Overall, There’s not much more to say about this title since in general there’s not too much for me to talk about Pinball. Pinball fans will get a kick out of this one. It’s certainly a lot better than the Pokemon Pinball game. Mario Pinball is still the definitive title, but Metroid is likely the second best portable Pinball title. I can’t imagine getting this for the full price back in the day, but it’s only a dollar or two nowadays so you can’t go wrong with that price. Once you purchase it, prepare for the nostalgia as you hear the classic Prime tunes again. We do have Metroid Prime 4 coming out at some point so the series isn’t dead yet! I’m not the biggest Pinball fan but don’t get me wrong, playing the game is fun. It’s one of those titles that you can easily pop into the console whenever you want and play a few rounds. It’s always nice to have an easy option like that one at the ready for whenever you need it. I’d love a Super Smash Bros pinball game someday. now that would be a lot of fun.