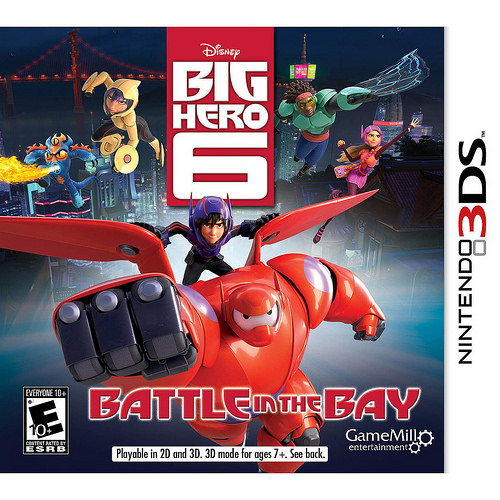 It’s time to look at another side scroller in the form of Big Hero 6. Most movies may not get tie-in games anymore but Big Hero 6 dared to go against that trend. It’s a game that definitely plays it by the books and feels relatively low budget like what you would expect from the genre. It’s short and straightforward but it is also fun. I’ve always enjoyed these cash in games quite a bit. They may not be AAA titles like Mario Odyssey or Sonic 2006, but in their simplicity it brings you back to an older, more nostalgic era of gaming.

So the plot is that someone has stolen yet another one of Hiro’s inventions. I forgot which one but it’s now in the wrong hands so that makes the villain very dangerous. The team decides to locate the villain at all costs and quickly head over to take him down. The plot is pretty self explanatory as the heroes do exactly that. They find and defeat the villain rather easily and Baymax didn’t even have to do a whole lot this time as he still tries to be a pacifist. That being said, he is thrown into the conflict by the end.

There are 4 playable characters who each have a distinctive fighting style. The main character can shoot out force fields which blow the enemies away. He is fun to play as and the levels go by quickly since he is so skilled. The next character is the Roller Blades character. Unfortunately they made her the worst character in combat as her attacks are the weakest. This is supposed to be balanced by the fact that she is the fastest fighter in the game but that doesn’t matter a whole lot since it’s not by a great deal and most areas force you to stop and fight the villains anyway. The third character is the power hitter of the group who wields a sword. He is easily the best character to play as since even the strongest enemies tend to lose in a single combo. Finally we have Fredzilla. He is in the middle of the gang. Not particularly strong but not downright weak either. His super jumps are fun since you just skip a lot of enemies that way.

Aside from their signature abilities the gameplay is that of a normal side scroller. You walk and jump through the level until you reach the end. There will be a few encounters with the enemy where you quickly dispatch them and keep it moving. Each level will only take a few minutes. There are 21 levels and the game lasted around 2 and a half hours. So I guess each level was around 6 minutes or so. It’s not quite Powerpuff Girls length but still a pretty short game overall. That being said, it’s certainly a lot more enjoyable due to both the level designs and the core gameplay. It’s more polished and the boss battles are all unique as opposed to simply punching them all into submission. Some of these bosses may even take multiple tries as you try to figure out how to hurt them. The game’s a little vague on that part but simply studying their movements and all should help you figure out the weaknesses.

As far as the graphics go, the game looks good. It’s still in the 3DS era so despite not being a big budget game it does hold up well. As long as a game looks clear and I get what’s going on, I typically give it a passing grade and this game earns that. The soundtrack is pretty uninspired though. No memorable tunes are to be found here. You’ll forget the ost the instant you put the game down although I can’t say I was expecting anything different to be honest.

There is some minimal replay value here. You can find the four Hero letters in each level to do something, I believe it may unlock artwork. You can also snag the 5 Health pieces in each level to level up your characters’ health bar. These things are fine but you’re unlikely to get them naturally unless you intentionally go for them and once you’ve beaten the game you don’t really have a need for the extra health if you really think about it. It’s still better than nothing of course but the overall message you should be getting from this is that the game is quite short. Aim to have fun while completing it but don’t expect the game to last.

One easy way to help the game a bit would have been to make the plot a bit better or the dialogue more passable. All of the characters just sound really annoying, Fred in particular. It’s hard to really feel like you should be rooting for these characters and instead you just want the level to start. The “cutscenes” are all very short so they don’t drag or anything though. They really just don’t add anything to the game and that’s always a little sad for the writers when you think about it. Letting Baymax be playable with some kind of unique gameplay like a flying level would have been nice as well. That’s effectively what Fantastic Four Rise of the Silver Surfer did for the DS a while back and it worked reasonably well.

Overall, Big Hero 6 is a fun game. You’ll enjoy each level and going for the collectibles along the way is a good tactic to make the game a more complete experience. The characters and story may be rather weak but the gameplay is the important part and it works well enough. It would be nice if the game was longer or had more modes to enjoy though. Regardless, this is basically the definition of a weekend rental although it’s unlikely to last you for the full weekend. It’ll at least buy you some time and you’ll have fun along the way. An easy fix would be to add a Multiplayer mode and then the game would certainly have a lot more replay value.