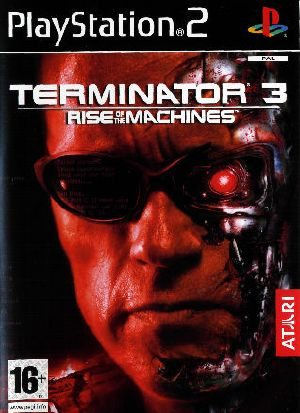 It’s time to look at the Terminator game. This one is based on the 3rd film and also acts as a prequel. It’s a story that naturally takes place in a rather dark environment since Skynet broke the lights. I was a little worried since my tv can’t handle the darkness all that well. Level 2 was incredibly difficult for that reason but after fiddling with the settings for a while the levels were finally bright enough to see. It’s a fun game that may not do everything right but succeeds in enough areas to be called a success.

The game starts off with you playing as the Terminator and blowing up a bunch of robots. The humans have reprogrammed you to be on their side. Then they learn that Skynet is sending their best assassin to the past to eliminate John Conner and his wife. They send the Terminator in pursuit but can he really defeat what is essentially a more upgraded version or himself?

As you might assume this is a 3D shooter. You grab various weapons over the course of a level and blow up all enemy robots on your way to victory. Each level will have a series of objectives and upon completing them you will move on to the next level. It’s important to realize that the mission is the priority so you never have to worry about defeating all of the enemies. If you are supposed to destroy a building and are about to die then quickly destroy it anyway as the success will sometimes override your death. That helped me out once or twice.

If you ever run out of ammo you can swing the base of your gun or throw some punches but that shouldn’t happen with how much ammo is usually going thrown around. Just remember to pick it up every time you defeat an enemy and you should be fine. My favorite weapons are the ones that leave a nice explosion as even if they don’t defeat the enemies they will knock them over which gives you time to finish the job. What you don’t want is to be put in a situation where all of the robots are blasting at you since your health bar will be torn to shreds. One of the weapons allows you to equip two at once which is handy since you knock them down with one while you blast them with the other. Finally, if you’re about to die anyway I recommend using the missile launcher since it will beat any enemy in a single hit and even a lot of the large robots will go down in 2. The catch is that it only has 3 ammo and fires really slowly so don’t use it if you are surrounded.

The gameplay changes into a 2D brawler for boss fights and that was a real highlight. The levels are few, but you can tell that some effort was put into them. You can toss the enemy around and can mix up your punches and kicks for various combos. It definitely got me thinking that a Terminator fighting game would be really good. There is just so much that you can do with the concept and I’m sure it would be a success. The boss fights aren’t particularly tough for the most part, but I did come close to dying in the last fight.

The graphics are pretty solid. The energy effects are nice and vibrant while the levels are nice recreations of the movie. The character models are a little more on the humorous side to be honest but they still at least resemble who they are supposed to be. Assuming your TV is on point you will definitely be able to appreciate the effort here. Unfortunately there isn’t much of a soundtrack but what was there was pretty sound. It works pretty well for the action scenes.

The main campaign should take you a few hours. There are 22 levels in the game and their length varies significantly. Some levels can be around 10 minutes or longer while others are barely a minute. In some cases a level will just take longer than it should because you might end up getting lost as the compass isn’t always 100% reliable. The toughest level in the game is certainly the escort mission where you have to protect John. He has the A.I. of a level one computer as he will walk into the line of fire without a gun and will die to a pair of bullets. That stage must have taken me at least 20 tries. Another aspect that makes this level tough is how you aren’t allowed to destroy any of the humans firing at you. This means you can only shoot each human once which is tougher than it sounds as it isn’t always obvious that you have already hit them once. The best advice I could give here is just to take it slow.

There isn’t a great deal of replay value after beating the story. All that I can think of is trying to find the second mini game to unlock. I don’t know about you but that isn’t a huge incentive for me to be honest. Still you can probably get this game for a cheap price and if so I would definitely recommend it. Yeah, the game is basically a cash in but it’s a fun one that put in some effort. You won’t regret the purchase.

Overall, Terminator has always been a really fun franchise. You don’t have to stretch your imagination to see how it would lend itself well to a video game. Hopefully a new Terminator game comes out soon because now there is only one modern title that I am missing. Ah well, I still have that one to look forward to at least. That was likely my last mech game for a while so at least the genre ended on a high note.