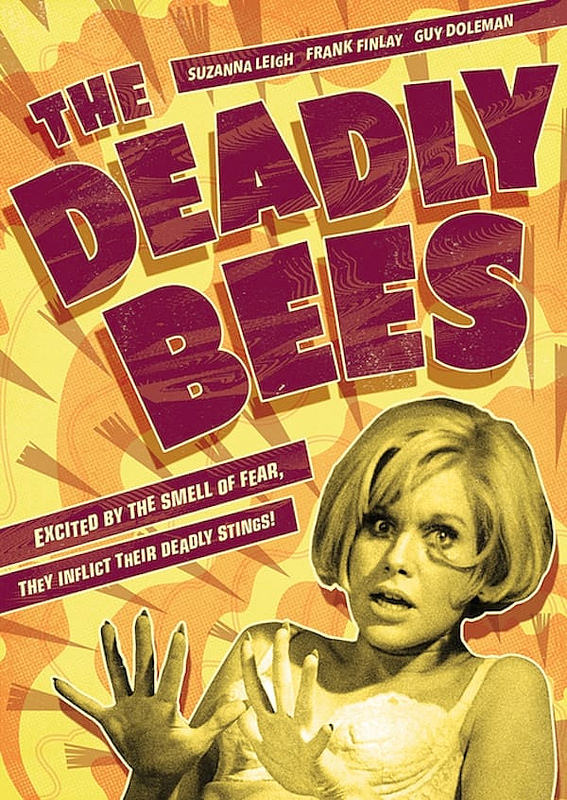 It’s time to look at one of those films. I’m talking about the kind of film that will make you cringe and wonder what the point of all this is. It’s tough from the start to make a horror film about Bees since the writers will wonder how to make them a threat without using any animal violence or destroying a bunch of bees in the process. So what did the film do? It opted to go with both options and as a result this is one film that has not aged well. Of course, that implies that the film was ever good which would be a mistake.

The film starts with a famous actress having a bit of a melt down. She’s been under a lot of stress so her doctor recommends that she go live in the country for a while. He gets his old friend Ralph to take care of Vicki. At first she is content, but gradually notices that everyone is acting rather oddly. Ralph is a bee keeper so there are always bees around but they’ve started murdering people lately. Ralph’s neighbor Manfred lets Vicki know that Ralph is crazy. Apparently he just wants to murder everyone with his bees. Vicki decides to help Manfred find proof of this before she goes back home where it’s safe. She also decides not to question the fact that Manfred also has a bunch of bees. Who is guilty and will Vicki be able to live through this experience?

This is the kind of film where you can’t trust anyone because they all act suspiciously in one way or another. In Ralph’s case, he’s always rather rude to everyone. He tells Vicki to stop snooping around the Bees but doesn’t give her any reason. He quarrels with his wife constantly and doesn’t give you any reason to trust him. Then you have Manfred who is extremely shady and doesn’t get along with Ralph. He throws around a lot of accusations but only does so when Ralph isn’t around so the guy doesn’t come across as the bravest individual around. Perhaps he is just jealous of the other guy’s bee skills. Then you have Vicki who feels rather naive the whole time. She just believes whatever she is told and is convinced into doing the most dangerous tasks. She should have immediately tried leaving the island and letting the cops try to get to the bottom of this. Even though things work out pretty well for her, it felt more coincidental than anything else.

As mentioned earlier, there is some animal violence here which dooms the film. Ralph naturally has a dog and this doesn’t end well as the dog decides to go after the bees. Lets face it, the only reason why the dog was added in the first place was so we could get this scene which is rather mean spirited. The Dog just shouldn’t have been included in the film at all. We also have a lot of Bees dying which is certainly less emotional but it all ends up hurting in the end. Nobody wants to die on account of bee stings, it’s a rather brutal way to go out. As a result, each death just comes across as more painful and needless than it ought to have been. It’s a disadvantage of being a film about Bees so the instant you choose that as the film’s focus you have already dug a little hole for yourself.

I won’t say which person is actually the evil one, but I will say that it doesn’t matter for this next criticism. The innocent party knew that the other one was guilty so why did he not do anything about it? As a result multiple people die including Ralph’s wife, the Dog, and even the neighbor down the road who came over to help. Yeah, the girl seemed to be trying to get the title of mistress and seemed shady, but she still didn’t need to get such a violent end. The innocent guy decides to just copy the villain and starts breeding murderous bees of his own. Of course the villain finds out about that and decides to shut him up. The plan felt like it wasn’t thought out very well. Of course the police wouldn’t have believed him either way, but he should have just tried to burn down the neighbor’s bees when he had the chance. Both men live right next to each other so it should be a very easy feat. The innocent party just stayed very passive the whole time and would have certainly been bumped off at some point or another.

It’s too bad we didn’t see more of the Agent in this film. He seemed like he would have made for a more enjoyable character than any of the others. I like how he was only worried about the island because it meant that he wouldn’t be getting any more money from the actress for a little while. It may not be the most noble reason, but the guy was very straight forward and you have to admire his earnest nature if nothing else. A film taking place back in Hollywood with the rest of the cast scrambling for opportunities while the actress was gone would have also just been more entertaining than what we got.

Overall, Deadly Bees is definitely not a film that I would recommend very highly. In fact, I wouldn’t recommend it at all and you should actively avoid it. There is nothing redeeming about the film. Bees don’t make for good antagonists and the film takes all of the bad routes that it can. There isn’t a single scene that feels inspired or well shot to the point where you would get a look of amazement. It just does everything by the book and does so in a way that will make you shake your head. Needless to say, this doesn’t bode well for any future Bee films either. Maybe what we need is a film about robot bees instead, that could work.

2 thoughts on “The Deadly Bees Review”