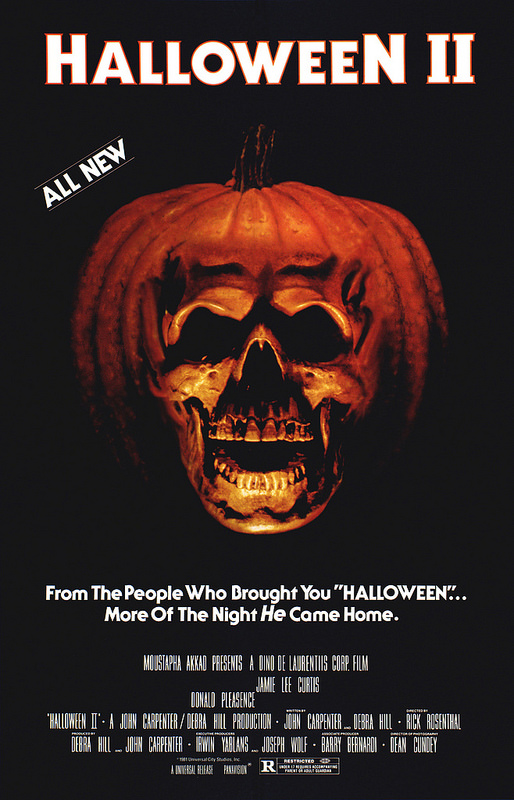 Well, it looks like the sequel to Halloween has finally arrived. There’s only so much that this film can try to do to be good. From the start you know that it’s not going to be good, but can it at least be entertaining? Well, I’ve seen worse horror films so I’ll give it that, but this is still one of those sequels where you just shake your head. Myers has also grown a lot more powerful over the course of a few minutes as he suddenly becomes just about invincible here. Why is he bullet proof!?

The film takes place seconds after the first which is impressive. It’s an underrated approach and a super cool one if you ask me. I always like when the story picks up immediately like this. Basically, Michael Myers escaped capture last time and he decides to go right back to his goal of murdering everyone in the neighborhood. The cops have to try and stop him, but they can’t seem to save everybody. It looks like Laurie is going to have to save herself as expected. After all, when everyone else fails then it’s time to just do it yourself right?

Most of what I’m going to say here could be applied to the first film or any film in the series. That’s because Halloween follows what I’d consider to be the typical horror film outline. The only trope it seems to avoid is the animal violence one which I will give it some props there. I’m glad it was able to do that at least. The first thing dragging the film down is naturally the over the top violence. Naturally everyone meets pretty grim ends at the hand of Michael Myers. Most of the characters don’t even put up a fight or they go down without making a sound. (Rhyme intentional) Given that he has super strength and such at least it’s a little more believable than in some of the other films. Still, the body count in this film is incredibly high as nobody seems to have a way to communicate and he just takes down the whole town one at a time. It’s scary just how many people he gets and the cops never even find out about it.

Then you’ve also got horror trope #2, the terrible characters. All the characters seem to care about is getting past the friend zone. Two characters decide to hang out at a hot springs when they’re supposed to be on duty and looking after the patients. Then they can’t even tell when the other character has been bumped off. It’s also just an excuse to get a fanservice scene in since horror films seem to need that. There’s also the pointless emergency staff guy who keeps on flirting with Laurie throughout. The plot doesn’t go anywhere and I don’t even really get how the guy died. Sure, he tripped, but why would he die from that? Perhaps part of the scene was cut for the TV version or something but if there is no more context to that scene then this guy’s just a joke. He should have been written out of the film.

Laurie’s a reasonable character here. In fact, she’s the only reasonable character. She realizes very quickly that nobody else here is even remotely competent so she escapes from the hospital to try and save herself. Of course the other characters give away her hiding spot and drop the gun. If I was Laurie I’d definitely leave this town and never come back. Sam talks tough and he has a gun so he’s better than most of the characters, but he still isn’t the smartest of the characters. He plugs Myers 6 times and the guy doesn’t go down. What does he do in round 2? He shoots him 4 times. Look, if you think that this guy is basically unstoppable then you have to do all that you can to stop him. Trying to walk over and take his knife away isn’t smart so Sam is smarter than the policeman, but then go for a head shot or something. Do whatever it takes to make sure Myers stays down. Then Sam just goes back into running mode and his gun jams. Well gee…that’s just bad luck now.

Finally we’ve got Myers, but he isn’t even a character in this film. He’s basically just a zombie that is going around murdering people. I don’t think he got a single line here so maybe the film is trying to hint that he is basically dead by this point. Maybe the 6 bullets did finish him off and he is a zombie. Then again, I forget if he talked in the first film. Maybe he just can’t talk. Either way there’s not much to his character. The rest of the characters in the film just exist to die so you feel bad for them. In slasher films like this one only the main character tends to live while everyone else dies. It’s a rather tragic existence for the whole town, they were just outgunned.

There’s just nothing positive to say about the film. It’s not fun to watch and I dare say that it might be more over the top than the first film. Although I think the first film had animal violence so it was probably still worse than this film. The only positive I can say for this film is that it avoided the big 0 by avoiding the animal violence. Even then it was fairly close, but I think a 1 is reasonable. The film also isn’t particularly long so at least it doesn’t overstay its welcome quite as drastically as you might fear. Imagine this going for 2 hours? Now that would be really brutal!

Overall, Halloween 2 doesn’t try to do anything particularly clever or unique. It’s basically just a rehash of the last film. If the last film was a good movie then that wouldn’t be a bad thing, but there’s just nothing particularly good here. It’s a pretty mean spirited film where the villain has the edge throughout. Surprisingly there isn’t even a stinger here so I suppose the heroes can finally get a little peace at least. It’s a silver lining, but it doesn’t change the fact that I’d highly recommend avoiding this film as much as possible. Just stick away from it and you’ll be the better off for it.