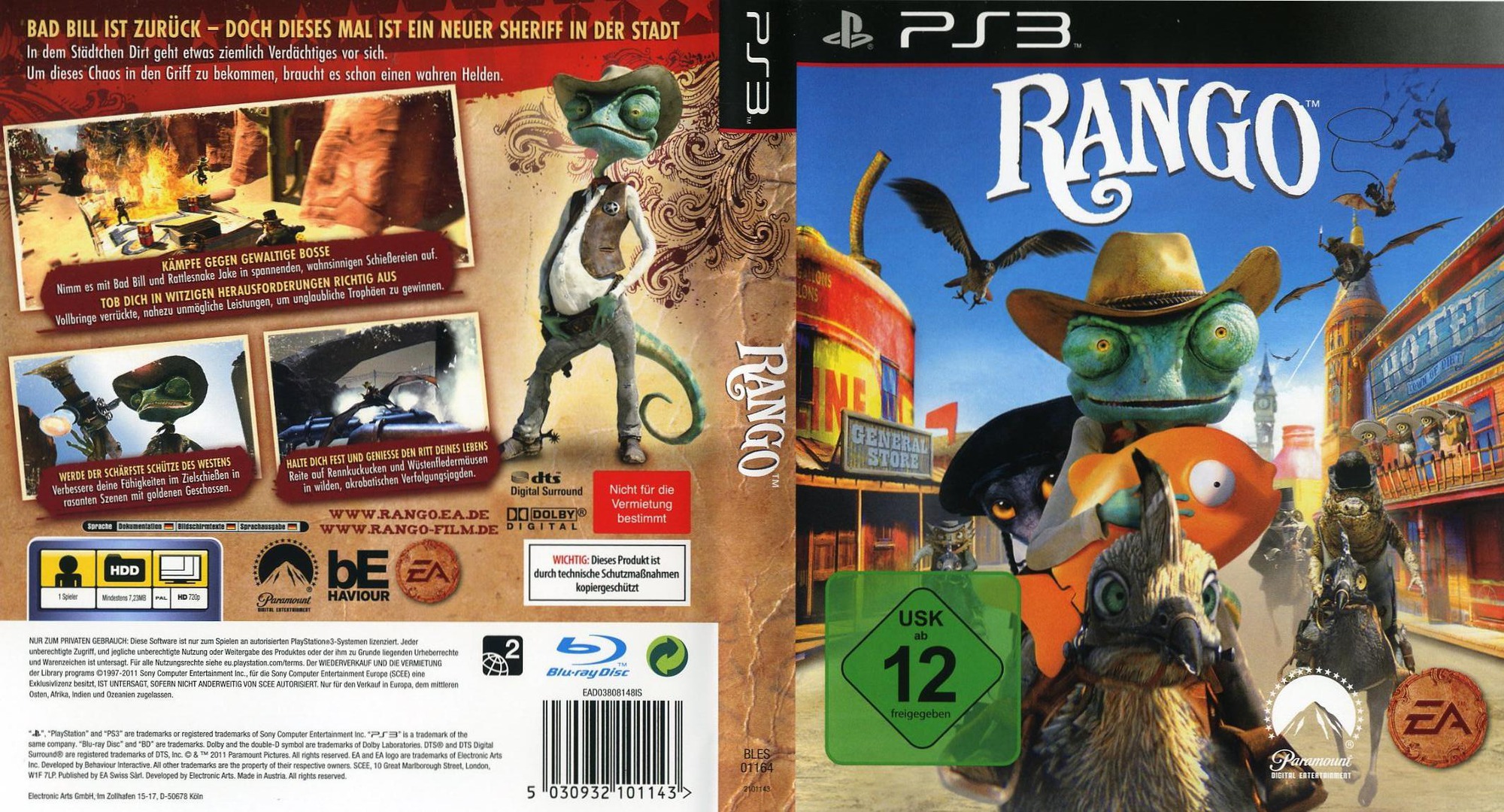 It’s time to look at a cash-in for a movie that I haven’t even seen yet. Rango is one of those games that I wasn’t initially planning to buy, but Gamestop had a B2 G1 Free sale and I needed a third game. The gameplay seemed reasonably fun and these titles are typically short so what’s the harm right? It’s a fun game even if there isn’t a whole lot to it. You can feel right away that this isn’t a AAA title and while the premise for the gameplay is good, it just isn’t very polished. It makes for a fun game for a one time playthrough.

The story involves a lizard who is the Sheriff of a village. One day, one of his friends runs into his bar and gets vaporized as he takes out a mysterious stone. Everyone at the tavern is shocked, but Rango calmly explains what has been going on. His story takes up most of the game as each level is a different experience that he had in the previous week. He doesn’t remember everything too well and likes to throw in some hyperbole so the viewers have to keep things real for him at times. Still, with aliens involved it does seem as if Rango is their best chance for survival. Can he do it?

The gameplay is pretty simple. It’s a 3D platformer game. You move and jump across the obstacles. You also have a gun on hand which you use to blast away at the enemies. Alternately you can engage them in hand to hand combat, but there is little reason to do that since the gun is simply better at all times. You’ll get the hang of the controls in mere moments. Jumping is important while shooting at all times to keep your counter combo up by not letting your opponents strike. You want the counter high because you get extra money that way and that’s how you get upgrades to all of your skills. The gun upgrades are definitely good to have. By the end you’ll be shooting so fast and the reload will be nonexistent. Of course, this game isn’t meant to be challenging anyway, but you’ll progress through the levels quicker which is always good.

There are around 9-10 levels in the game and most of them are quite short. You’ll be done with the game in 2-3 hours I’d say. It’s a pretty short amount of time, but at least there are trophies to obtain which helps a bit with the replay value. You’ll also be buying the game for a pretty cheap price at least which helps. I do have to still give it a thumbs down in the replay value department though. This is the kind of game that you play once, but typically won’t go back to. That’s just the way it’s built.

Naturally there isn’t all that much to say about the graphics either. It’s not as if they are downright bad or anything like that, but they just don’t stand out. They are as average as the graphics can get. Still, as long as the levels are clear that’s what counts. Likewise the soundtrack isn’t anything special either. It’s around, but you won’t remember any of the tunes once you have finished. Again, this is just a very average game, but I’ll take average over bad.

This review isn’t exactly all that positive, but you have to understand that I enjoy the average game. As long as a video game doesn’t make any big mistakes I’ll probably have fun with it. That’s the case with this game. Rango provides some fun levels with good gameplay. We also get a few racing levels and the fact that we get an actual story with cutscenes helps the game as well. It’ll keep you entertained throughout. One thing I have to warn you about is how often you shoot though. R2 is the trigger button which is normal but your finger will probably be sore by the end with how much you have to spam it. It’s because this is like in the Wild West so you have to keep pressing instead of holding the button down. I was ready for the game to be over by the end so my hand could get a break.

Overall, Rango is a good PS3 game. It is exactly what you would expect it to be like. These movie tie-ins rarely try to mislead you into thinking that they are something that they are not. This is a very basic 3D platformer game. It’s no Mario or Sonic nor is it trying to be. It’s just trying to earn some extra cash while giving you some good levels. If you tend to like these movie tie-ins then I would recommend checking it out. If you need something more from your gaming experiences then you can safely skip this one since it won’t give you any of that. At least we do get a retro arcade type level as a nice homage to the old days of gaming by the end.