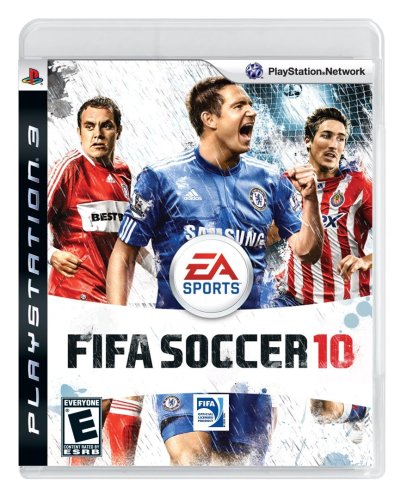 It’s time for yet another FIFA game. You’d think that by now I’d really have the controls down, but it’s still a pretty tough game I have to admit. Scoring goals is really tough although I found out near the end of the game that I had actually been using the wrong button to shoot the ball the whole time. That explains a lot. Once I figured it out I still only scored one goal, but that was an improvement and I did end up winning the game so that was cool. I ended up winning another round in a penalty shootout as well. I think I will one day be able to start really winning here.

There are the usual assortment of modes here. You’ve got your franchise mode, quick matches, exhibition, minigames, and online battles. Naturally all of these modes have quite a lot of content in them so you don’t need to worry about a lack of replay value. The replay value here is endless and you don’t have to ever stop playing unless you don’t want to. Of course, with newer FIFA games out there you probably won’t want to stick with this one for long, but at the end of the day the gameplay is pretty similar for all of them anyway.

I would have a hard time telling you what is different between this one and FIFA 11 for example. Like with that one you get to play in 3D practice mode while waiting for the screens to load. The gameplay is still fairly simple which works out for me. I still think the goalkeeper is pretty overpowered and you’ll be lucky to land any real shots here, but at least you’ll know what you’re doing. The defenders give you a lot of space so you’re free to run in and try to dominate the pace of the game. Playing defense is a lot easier. So long as you don’t go for many slides you likely won’t attract any fouls. With no fouls to worry about you can just go ahead and crush your competition until they hand over to the ball. It may result in a lot of 0-0 games, but it’s worth it.

As always the graphics are definitely quite sharp here. EA spares no expense on its sport titles. It’s all very lifelike which is pretty neat. Naturally you can’t compare it to the really new ones, but this game did come out quite a while ago. When it came out the graphics were definitely very high end. The soundtrack is a lot less noticeable like in most sport games since the actual sound effects and such end up completely dominating the music. That works for me though since EA’s music is rarely all that great. The tempo tends to fit for the game you’re playing but I can’t really speak to the lyrics much.

There’s really nothing bad to say about FIFA 10. There were no glitches or bugs that I encountered. There are quite a lot of modes to choose from so it’s not as if the game was made in a rush either. It’s just a very direct game. What you see is what you’ll get. It’s got you covered with whatever kind of soccer modes you want to try. The gameplay may be hard to get into, but once you do learn it fully you’ll definitely be ready to dominate your competition quite easily. It’s definitely a very rewarding game in that sense since once you learn it you will completely dominate your competition.

Overall, FIFA 10 is another solid game. Ultimately there really isn’t much reason to play it now though. You can play FIFA 14 for about 5 bucks nowadays and you’ll have much better luck finding opponents online. I get the feeling there even if the servers are still up for 10 (and they probably aren’t) it’ll be a while before you find a match. There just won’t be many people still playing a FIFA game from that far back. It’s just not going to happen if you ask me. Still, just because there are better versions of the game doesn’t mean it takes away from this one’s score. You have to judge the game on its own and in that case I’d say that this one is still fundamentally sound.