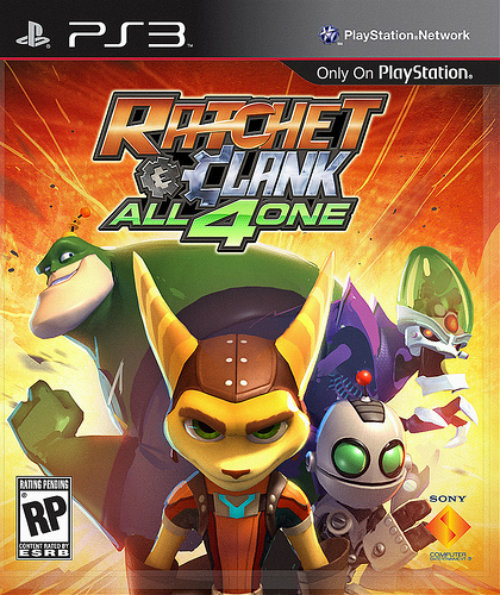 It’s time to look at the final Ratchet & Clank game. (Not counting the movie adaption) All 4 One is definitely a very different game in the series as it focuses on the multiplayer aspect and naturally had to switch the gameplay a bit to set this up. I think they probably could have still pulled it off with the normal gameplay if you ask me, but I don’t know the full details of how that would work so it’s just speculation. Either way, while the gameplay is a bit weaker it’s still a solid all around game with a fun plot and good fundamentals.

Ratchet has retired from the hero gig and Qwark is now the President so everyone has achieved their goals. This is all thrown out the window though when the planet is invaded by an army of robots. Ratchet & Clank must get back out there in order to save the universe and Qwark tags around to help give his approval ratings a boost. They are even joined by their old enemy Dr. Nefarious who is only working with them for now. He warns the heroes not to get the wrong idea. Who can possibly stop this group of all stars?

The gameplay is your classic 3D blasting platformer. You are given an array of guns and other weapons to use as you rampage through the various levels. You’ll gain many weapons through the game by going to the shop and purchasing them. There aren’t a whole lot of weapons this time so you should have enough money to buy em all well before the final level. It also won’t take a whole lot of grinding post game to get the rest of the upgrades to be honest. The main difference here compared to usual is the team gimmick as I mentioned. There are a bunch of obstacles in the level that you can’t get by without a partner. If you’re playing by yourself then the A.I. will help you but it’s probably one of the worst A.I. I have seen in a very long time. Clank will literally jump off the stage to intentionally die just to make sure you lose.

You don’t actually lose a life unless both characters die, but with a computer ally more times than not that means both of you will die if you do. The game isn’t all that difficult and there are save points constantly so that’s not a big deal, but it will get annoying when you’re counting on your partner. Some parts of the gameplay are also just a little less polished than usual as well. For example, switching between weapons can be pretty rough as you need to cycle through 2-3 screens to get to the one you want. Sometimes it will result in you picking the wrong weapon as well. Then you’ve got the target aiming which will actively switch targets on you if there are a bunch of enemies. Small things like that keep it from being quite a solid as some of the others. It feels a bit more like a cash-in.

That being said, making the game multiplayer is no small feat. It’s definitely always a great idea to have that as a feature and in this title’s case you can team up with people online or offline. Your character also gains levels throughout the game so for example I got Ratchet to level 7. I’m actually not sure what the levels do, but they must have some kind of benefit I’d imagine. There are 9 chapters in the game and each one can take close to an hour or so. It’s a pretty good length for the title and nowadays you can get the game for cheap so you’re getting good value for your purchase here. Only thing to watch out for are glitches. They happened to be twice where I had to die to get the boss to appear again after he vanished. Definitely an odd one.

I also definitely did enjoy the story. The series never fails to deliver on that front with a lot of crispy dialogue. It’s one of those games where characters are constantly talking. There are big cutscenes after every chapter, but with all of the mini ones thrown in there the game stays very cinematic like the rest of the series always is. The plot may not be quite as long or deep as previous games (particularly the time travel trilogy which got real serious) but it still brings across the ole charm of the series. Seeing Qwark and the gang is always fun. Nefarious is probably the weakest member of the group when it comes to the humor, but he rarely gets to be part of the team so it was nice to see him. Ratchet also finally remembered why he became a hero in the first place so I expect that development will probably stick for the sequel. It’ll definitely be interesting to see how the story goes in that one. The only boring part of the story would be the main doctor villain and his good counterpart. They don’t add a whole lot to the story although the twist about who the real main villain was definitely worked really well.

The soundtrack isn’t all that memorable, but I did like the credits theme. That one definitely worked really well to wrap the game up. The graphics also look real good, especially the cutscenes. It holds up really well over the years and I think it will continue to look good many years from now. While the gameplay may not be the sharpest in the series that isn’t to say that it isn’t good either. It’s still very good and I love this style of gaming. Mixing 3D platforming with gun skills is always a recipe for success. Just look at Fortnite or Star Fox Assault!

Overall, All 4 One is definitely a title that I would recommend. Naturally you’ll enjoy it the most if you’re actually playing as a full group, but you’ll still be able to progress through the game very smoothly on your own. The fact that there are save points every minute or so is always good since you won’t feel like you lost a lot of progress when you die. I’m pretty surprised that we haven’t gotten an announcement for another game in the series by now. I thought they always sold really well so Sony would want to have it back soon. Maybe they’re just waiting and are going to unveil a huge sequel one of these days. Either way, I can definitely say that the series had a great run.