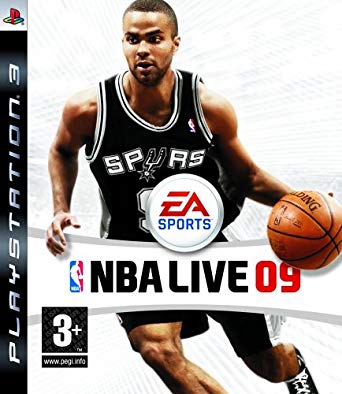 It’s time for another NBA game! This one’s actually a bit of a jump since the last one I played was 07 and this one is 09. The reason for that is I own two versions of 08 and I’m trying to find out if it is actually the same game or if they differ at all. If they are the same then I’ll only play one of them. On the whole I actually preferred 09 to 07 although the A.I. definitely is a little odd here.

It’s the classic Basketball rules so I can skim over that. The main gameplay difference here is the removal of the big wheel before each shot from 07. Instead you do have a bit of a meter on the ground, but it’s really hard to see it. It seems to be more of an acknowledgement that you made the shot or didn’t. So, in this way it feels a lot more like the older Basketball games which works for me. It just feels a lot more natural to just go for the shot instead of looking at a meter to see if it’s the right timing for it. I made less shots of course, but I think it was worth it.

In my first game the computer was surprisingly beating me. At first the score was very close as I was keeping pace but the gap gradually got larger as I couldn’t stop them at all and eventually they would start to stop me from scoring. I was mainly shocked because I thought that I had set the difficulty to the lowest setting for the first game. For the sport titles I like starting off easy and then increasing the difficulty. However, it turns out that I chose the second difficulty level instead of the first. So, I guess I felt a little better about keeping it even.

However, here’s where it got a little weird. For the second game I jumped to the highest difficulty level to see how badly they would be swatting me around. Instead I actually was up by around 30 points when the game wrapped up. How is this possible? Well, there were probably a few factors here. On one hand, I had more experience on both sides of the ball now. On defense I wasn’t going to be stealing any balls so I just stuck to the defender. On this difficulty the computer goes for quite a lot of shots, but surprisingly their accuracy didn’t get any better so they miss a lot and then I’d get the ball. Then on offense I wouldn’t go for anything fancy. I’d just try for shots when I was close and most of them would land.

The main difference here is that on lower difficulties the computer would just go for the easy shots while on this mode they seemed to take the shot as soon as they were within range of the 3 pointer. They made some of them, but missed the rest. I assume this has to not be intentional since there’s no way you should lose to the equivalent of standard mode and then take down very hard. Maybe if I was better at the game I would have done worse in the final difficulty, similar to how it is in Super Smash Bros. It’s better in that game to spam smash attacks against level 9 computers then going for combos. Whatever the case, I will admit that it was pretty cool to take down the A.I. for the count.

The graphics are definitely pretty sharp as always. The presentation is a little more elaborate here than in the other one. At the same time, it’s all pretty skippable so I think the game did a good job with that. It feels professional but very optional which I think is always the perfect balance for sport games like this to have the presentation but not to make it mandatory. If it’s too long then it’ll take away from the fun.

As always it goes without saying that there is a whole lot of replay value to be found here. The Basketball games are all unique so you can do a bunch of matches and not get bored. Furthermore, there are minigames to consider and you can start a franchise. It’s always pretty much the same modes but they’re all the core content you would expect. There’s only so much you can do in a Basketball game…or only so much you would want to do. That being said, I wouldn’t mind some spinoff modes like having the basketball players play with a Football or a Baseball as they try to land it in the hoop. Little mini modes like that would be fun for the novelty.

Overall, NBA 09 is definitely a powerful entry in the series. Longtime fans of the NBA games may not see a whole lot of new content which is a fair point against the game. However, it’s not good to change these titles just for the sake of changing them so to that end I’m glad that it’s still the same ole game that I remember. It’s consistent gameplay and win or lose it is a blast to play. I look forward to playing the next few NBA titles and seeing how they stack up as well.