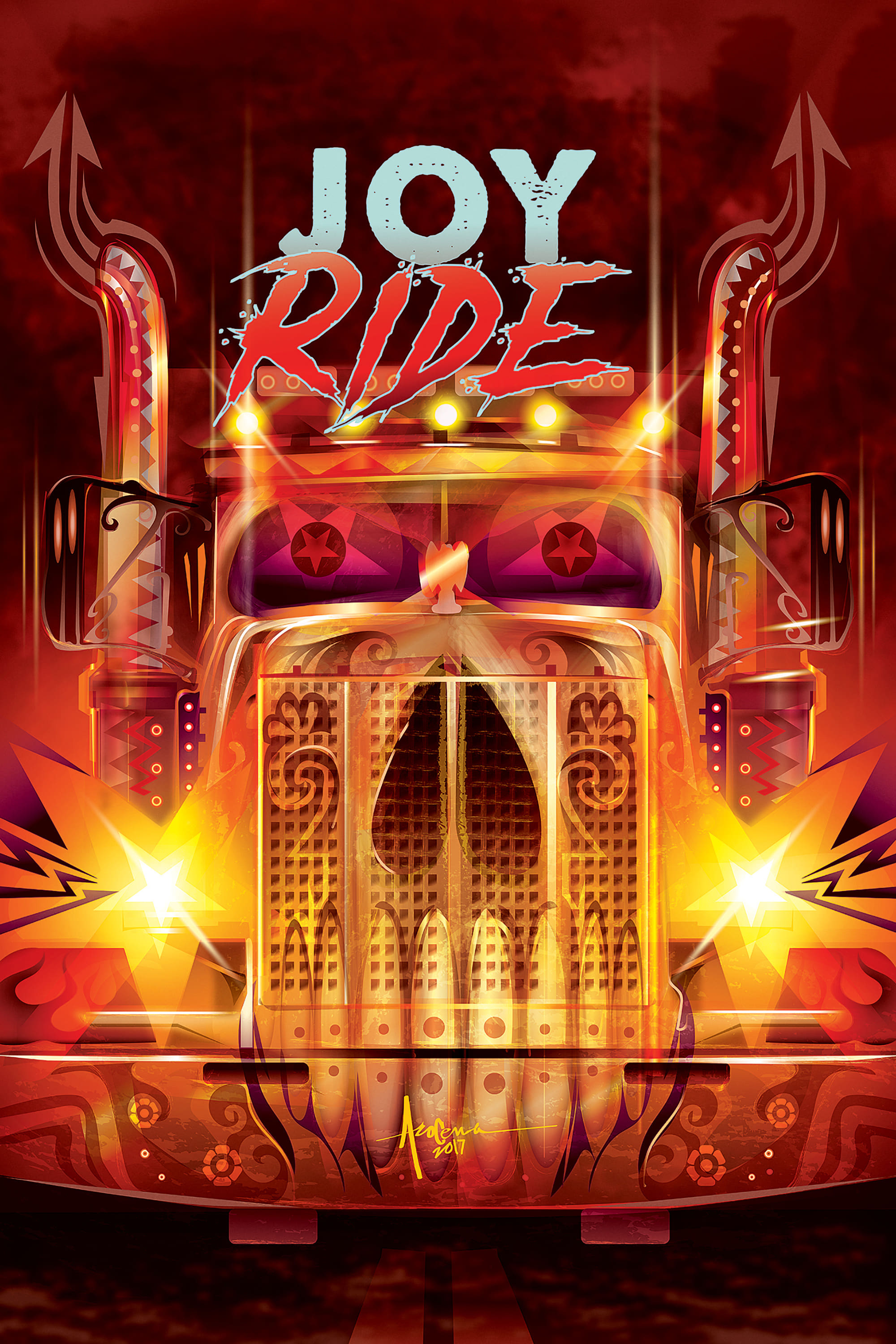 It’s been a while since I saw a classic slasher. This one plays it pretty straight with the villain being everywhere and knowing all the answers as he makes things miserable for the leads. The film also goes out of its way to make the leads as unlikable as possible so in the end everyone loses. It’s a pretty bad film for sure and one of those titles where you feel like the heroes had a lot of chances to get out until they didn’t.

Joyride starts off with Lewis getting a call from his old friend Venna. She doesn’t have a ride anymore after going through a breakup so Lewis quickly buys a car and offers to drive her. Along the way he finds out that his brother has been arrested yet again so he makes a stop to pick the guy up. Fuller figures that he’ll be a third wheel on the drive and since Lewis isn’t direct enough to say otherwise they head out. Fuller quickly gets bored though and wants to live on the edge so he installs a radio in the car and convinces Lewis to play a prank on a driver. The prank is to convince the driver that he is a girl and trick him into going to a hotel room. The prank works a little too well as the driver murders the guy and then decides to get payback on the brothers. He now intends to murder them and Venna but first he wants to humiliate them for a while.

That’s the main plot and there isn’t much to it beyond that. Rusty (The driver) continues to force them to do whatever he says as he terrorizes them with his truck. He also takes Venna’s best friend hostage so the heroes can’t go to the police. The guy has a lot of spare time on his hands as he puts graffiti on a bunch of signs and then finds a way to put a radio in the main character’s car without leaving any evidence of it being tampered with. He had time to track down Venna’s friend and also manages to spy on them the whole time. Don’t think about any of this too much because it doesn’t make a whole lot of sense.

The guy is just everywhere and he’s powerful enough to murder everyone who gets in his way. Even in the dark through a big field he is able to go in and swipe one of the characters without the other 2 being able to do much of anything. Even though he uses the prank as the excuse for going on this murder spree it’s obvious that the guy was crazy from the start. He just wanted an excuse and the main characters gave him a pretty easy one. Rusty’s a fairly shallow villain and not a likable one, but at least the truck is decent.

Lewis is unfortunately a terrible lead and a film always tends to suffer a bit when the main characters are really bad. Bailing Fuller from jail is a good thing to do, but he definitely should have told the guy to find his own way out of town. Driving with him all the way was a bad idea especially since Fuller immediately started breaking the law. While Lewis isn’t nearly as bad as Fuller you can’t give him much of a pass simply because he allows everything to go on. You can’t be wishy washy about this kind of thing. Lewis never makes a stand and that goes to the prank as well. Lewis is the one actually pranking Rusty and if he were a better person he never would have even entertained the idea of doing such a thing. He’s just got a ways to go.

Meanwhile Fuller is terrible. Pretty much all of his lines are antagonistic and he gets a kick out of picking fights and generally being a nuisance to everyone. He objectifies Venna almost immediately and then actually tries to have a serious romance later. No matter how much the film tries to make him seem useful or nice towards the end there’s just no way you can buy it. Also, in a life or death situation anyone can try to help someone else, it doesn’t mean that they’ve suddenly changed. This guy was just terrible.

Venna is okay, but also not that good. For starters, the fact that she subtly asked Lewis for such a long inconvenient ride makes it seem like she is manipulating him a bit. She probably knows that he has a crush on her and is cashing in on this. The scene where she hangs out with Fuller later on is also suspect and while no romance goes anywhere in this film, I’m just not sure about her end game here. Without a doubt she is way better than the other two characters though and probably regretted going on the drive with them by the end. It really did not pay off well at all. That’s also why the best friend gets the worst luck here as she had absolutely nothing to do with anything and got roped in anyway.

It almost goes without saying that this film is incredibly violent. Rusty makes sure that each death is as painful as possible and he racks up quite the rap sheet here. By the end of the film everyone is pretty banged up. Then you’ve got the writing which is pretty terrible. The TV version had to air out quite a lot since the characters had quite the potty mouth. The script definitely could have written them out to be jerks while showing a little more restraint here.

Overall, Joyride is one of those films where you have nobody to root for. In general slasher films will never rank all that highly for me because of the inevitable bad script and the over the top violence. The main characters not being even remotely good also isn’t surprising but I dare say that this was the worst main cast in a very long while. The fact of the matter is their prank wasn’t funny in any sense and was also quite dangerous. The driver could have easily walked into a home with a Rusty type character and been in major trouble. Pranks like that shouldn’t even qualify as a joke because they are so mean spirited. I’d advise you to stick away from Joyride. It’s not like it does anything to differentiate itself from the other slasher films anyway and you won’t be missing much of anything by skipping out on it. I have a feeling that the sequels are more of the same. The twist at the end you’ll definitely see coming a mile away, hopefully the characters are smart enough to tell the cops since at least two of them saw Rusty directly and should quickly be able to see through the ruse. Proving it is another matter entirely but the ice truck halves should still be around somewhere.