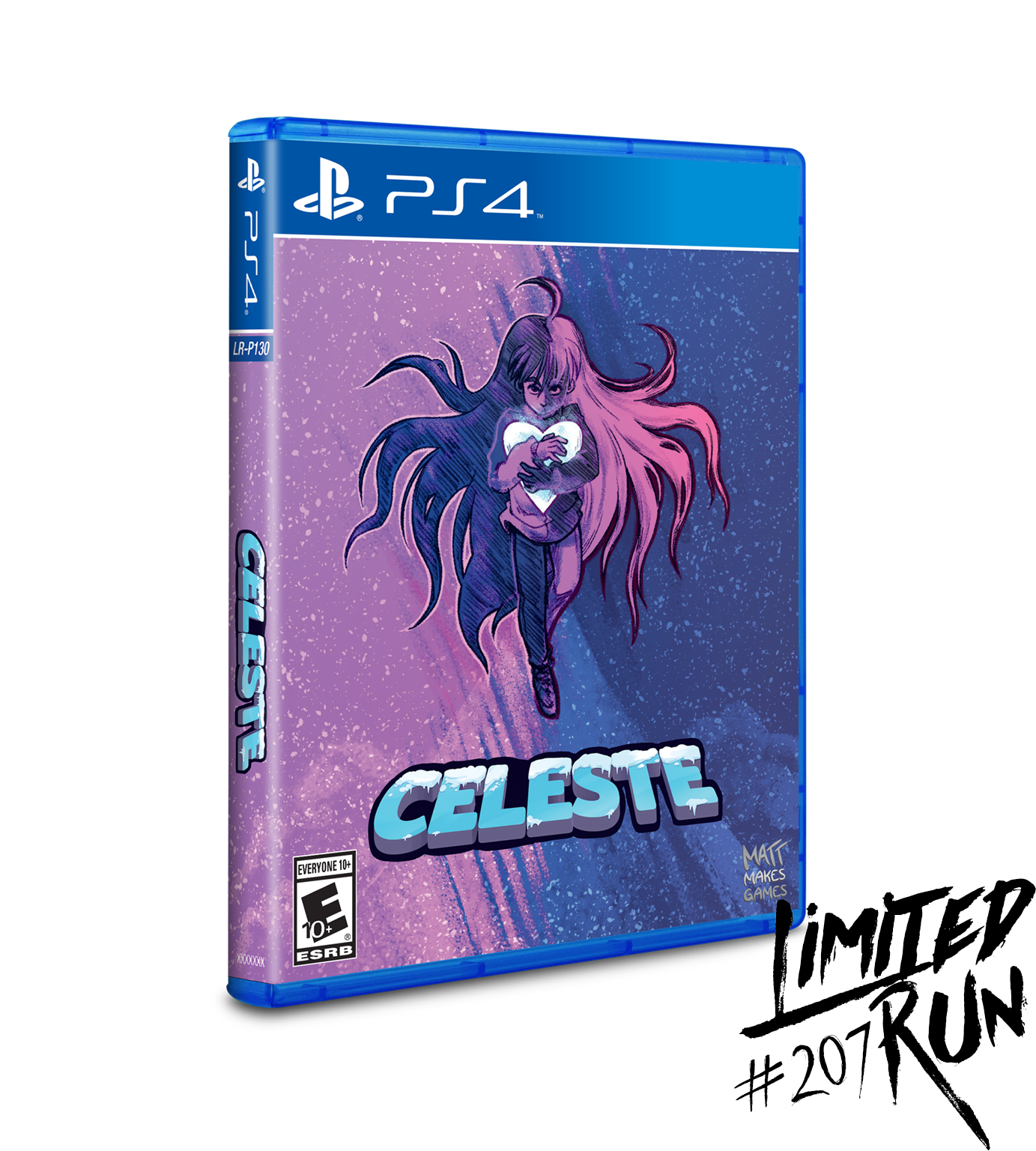 It’s time to look at an indie game that got pretty well known after it came out. It always looked pretty fun so I’m glad that I’ve now gotten to try it. The title isn’t particularly long, but it’s fairly challenging and a complete title. There are no real weaknesses here and the plot is pretty fun. It may not become the next Asdivine Hearts, but I’d definitely be down with a sequel someday.

The game follows a girl’s journey towards climbing a huge mountain called Celeste. While you have the option of re-naming the main character her given name is Madeline. She is fairly timid and figures that climbing the mountain would be a very big accomplishment. Unfortunately there are many obstacles standing in her way. Aside from the fact that the mountain is already an extremely difficult thing to climb, she will also have to contend with demons and her dark side which wants to sabotage her at every corner. Madeline can’t drop her guard, but so long as she continues to believe in herself and fights hard she should be okay.

The gameplay is like a 2D platformer but you have a few extra mechanics to keep in mind. One if the fact that you can air boost. This is incredibly handy and crucial to the levels. You can stick to walls and climb up and down. This uses up energy though and when you’re out of energy you’ll just end up falling. The goal is to get to the end of the level which is usually trying to go as high as you can. At times the exit will be blocked by a locked door and you’ll have to go around activating various items/switches in order to get through. The key here is to master the air boosting and everything else will come into place. One fun aspect of the game is that it keeps track of your deaths which is really cool. In the end I died exacting 500 times according to my post game stats. I wonder if they round it at all or if I actually did happen to die at such an even number. If so then that’s also pretty neat.

You may wonder if it’ll get tedious dying so often, but Celeste actually handles this extremely well. When you die, your re spawn has no animation. You just re-appear at the start of the section and no time is lost. It would be monumental if other games could adopt this same strategy or at least a game like Mario Maker where those seconds would add up to valuable time. Each level in Celeste is broken up into many small sections and the good part about this is that you don’t lose much time. No matter how often you die, you’ll only go back to the beginning of that mini section so it’s really not a terrible penalty at all. The developers really knew what they were doing here.

The final level is especially fun since you get to enjoy some extra power. It’s sort of like playing as Super Sonic for a level. You can really feel the difference between the characters and it’s a lot of fun. The level designs were also really great to be able to handle this without breaking. There was definitely a lot of effort put into this game, that is just evident. There are so many different kinds of platforming elements thrown in here that will challenge you every which way possible. It’s never unfair either, just tough enough to make sure you’re always paying attention. I died close to 80 times per level which speaks to the difficulty, but play the level enough and you’ll learn the patterns.

The story has some mysterious elements like Undertale, but it’s not nearly as thorough or filled with horror elements. While the game has a bit of a suspenseful air at the beginning it quickly becomes more of an emotional game. It’s going for a different feel than some of the other games. Most of the other platformers I’ve played like this one would win in terms of plot (Trine, Shantae, Shovel Knight, etc) but it still has considerably more plot than some of the mainstream platformers. I think one thing that could have helped push the story into the next level would have been a final demon of sorts. Someone that Madeline needed to conquer to really end up breaking her shell. As it stands, the final boss was handled really well though. It was definitely a tricky encounter that felt very climactic.

As for the graphics, the game looks nice. The sprites are less detailed than in others and I think it’s intentionally going for a very old school look. Most of the effort is put into the backgrounds which are definitely solid. It really gets that mountain atmosphere down pat. Celeste’s music is fairly standard. There aren’t any themes that you’ll be humming afterwards and since this isn’t really a fighting game there aren’t many big boss themes either. Still, it’s a very peaceful ost which works well in the background.

As for the length, the main campaign took me 4 hours. (Pretty much on the dot) There is a bonus level and to access it you will need some collectibles. If you intend to 100% this game I imagine it’ll take you significantly longer to beat the game. There are a ton of strawberries after all. I only got 9 out of close to 200. So add all those up and you’ll be here for a very long time. That’s probably why most people take closer to 7-8 hours to complete this game. Even with 4 hours it’s a satisfying experience though and you get a good amount of story. With the bonus content you’ve definitely got enough value for your purchase.

Overall, Celeste is just a solid game. The plot’s pretty interesting and you’ll get to think about what is happening for yourself. Is there a dream element in this or is everything happening in the real world? The whole conversation with the guy at the very beginning of the game is still very strange, likewise with the phone call to the Mom. Both scenes seemingly have no purpose being in the game so I believe that it’s hinting some of these events may not actually be happening. It’s at least a possibility, but ultimately I do prefer to think that it all happened. As a result, I’m just going to roll the dice on the possibility that this is all happening right now. When you play through the game definitely decide for yourself what is going on though. Doing the detective work is part of the fun.