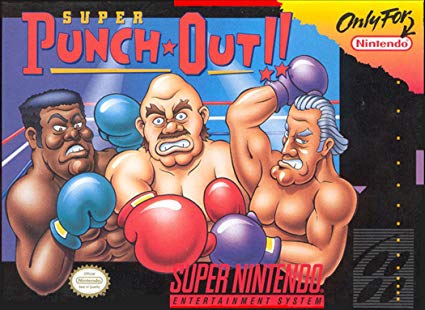 The SNES Online finally added some new games so I was definitely ready to go and check them out. Starting out with Super Punch Out felt right since it’s a pretty classic fighting game and I’m always in the mood for some boxing. It’s pretty fun, but the game definitely does feel its age a little more than the others. One of the reasons for this is the attacks all look pretty similar to it’s hard to know how to block them the first time around. You’ll definitely get the hang of it after getting knocked around by the combo a few times though.

There are a few modes here, but I dove straight into the championship option which is the main one. There are 3-4 circuits and each one has 4 rounds. If you win all 4 rounds then you have cleared that circuit and can move on to the next one. Effectively it is like going through the cups in Mario Kart. Each one gets more and more difficult so you have to work on your skills. The first circuit you can probably clear just by spamming the punch option. Once you get to the second circuit all bets are off. You have to bring in your A game if you really want to stand a chance here. Anything less and you’re going to get completely wrecked.

The gameplay is pretty simple. It’s close to being a first person game but you do see your character so I guess it might be 2nd person camera view. You have to throw punches to knock the opponent to the ground. If they stay down for 10 seconds you win or you could also win by completely knocking them out. Try as I might I could never get a real knockout. There’s probably some kind of trick to it where you need to use a specific move or something. You can shift to the left or right to dodge attacks or dodge by crouching backwards. You can throw a normal gut punch or an uppercut. Those were the only two punches that I could find at least.

Punching is all well and good, but the opponent will block a lot of hits. Typically the best way to hit him is to either hit right before he lands his blow which will deal a lot of damage or blocking his strike and quickly countering with your own. Both of these strategies require a good amount of reaction speed as well as confidence in your punch. Otherwise if you just spam punching, the timer may run out. That actually happened to me in one match. I think it’s a little iffy since I definitely had the lead in terms of health, but it counts as a loss either way. I’m guessing my opponent has the home field advantage here because that’s just not right. So that’s why you want to be careful and pick openings so the damage will build up faster. Also when the opponent hits you he will steal some of your health at times and add it to his so you do not want to get hit.

I think the toughest attack pattern I was was this one guy who would use a two hit combo and he would do it a few times in a row. It looks like you can dodge to the side, but that doesn’t work nor does hiding in the back. What’s the way around this? Well, you have to not move and that’ll automatically block the first strike, then dodge to the side. Rinse and repeat in order to get out of this fight without a scratch. As I mentioned earlier, a lot of this is just trial and error. Keep on attacking each boss and you’ll figure out how to dodge each attack without a problem.

As for the graphics, they look good. I like how expressive every enemy is. When you attack them you can definitely feel it. Additionally the colors are just good. The game may not look amazing next to something like Super Mario World, but I can definitely see the effort here. The soundtrack is less impressive though and I can’t say that I really noticed it all that much. Maybe all the punching sound effects just made it too difficult to hear.

In terms of replay value there isn’t much here. Once you beat all of the circuits then you are really out of things to do. It should take you around 2 hours or so to clear the 4 circuits but then that’s about it. The game is free with the Nintendo Online so it’s not a bad deal all things considered. You’re paying for the experience and the gameplay is sound so you can’t go wrong there. I also like how each of the characters has a little intro dialogue and everyone ends up talking pretty tough before their matches. The little animations before their super attacks are also handled really well. It can be hard to react to them because of how elaborate the animations are, but that makes it all the more impressive.

Overall, Super Punch-Out is a good game. I don’t think it’s the kind of game I would play for very long myself, but the idea is pretty sound. It does remind m that I need to get the Punch Out game for the Wii soon. I’ve seen it in Gamestop several times, but it just never made the cut. One of these days it will though and it’ll be fun to see how the series has changed and evolved over time. If you haven’t played this one yet then you should check it out. If you enjoy boxing then you’ll like this game.