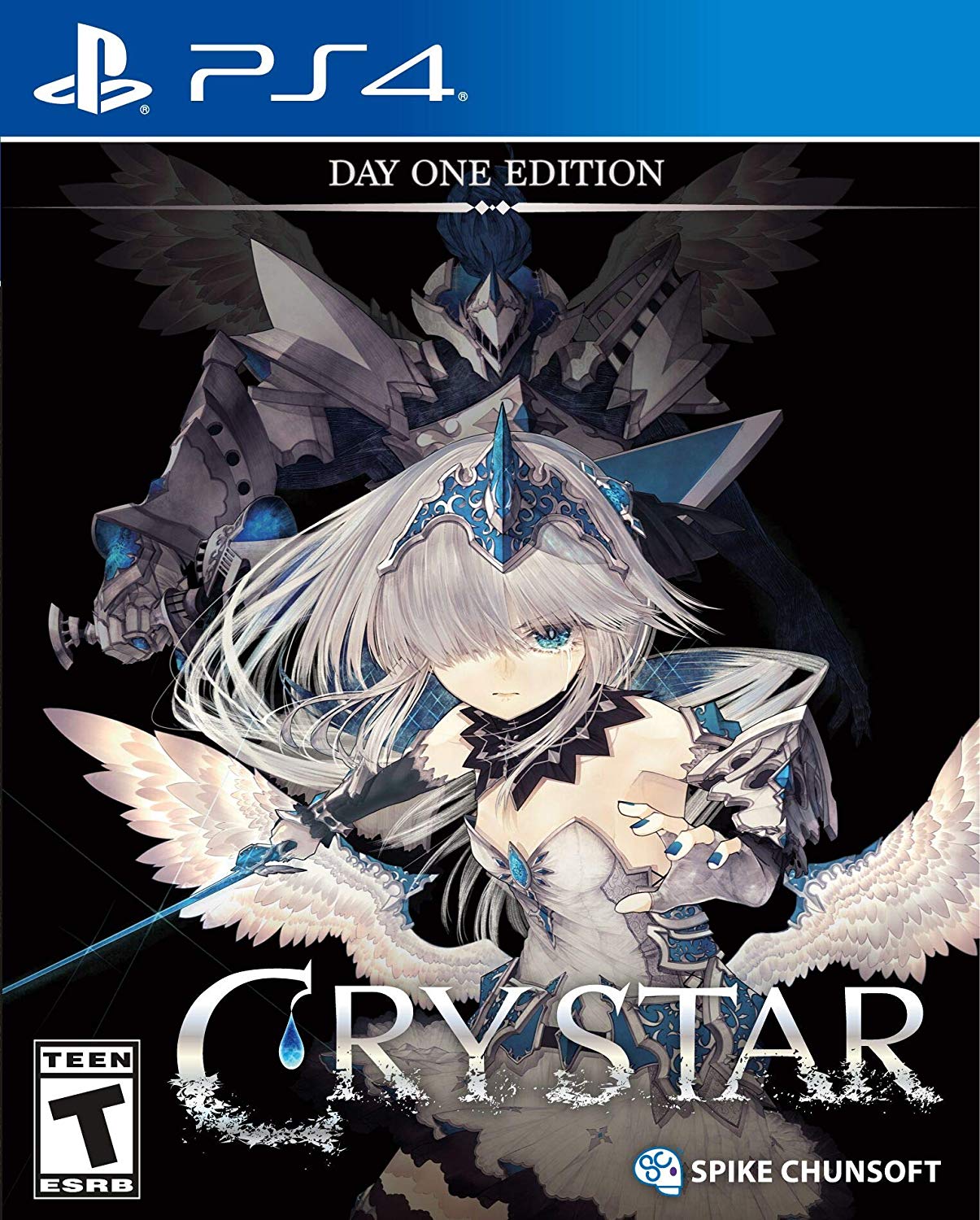 It’s time to look at a video game that I hadn’t actually heard of before. It’s a pretty new one and doesn’t appear to be super mainstream so I’ll cut myself some slack here. It’s definitely got an interesting cover and with a name like this you can’t help but get a little interested. It’s definitely a pretty good game with a solid plot. I’d definitely be up for a sequel to this one.

The game starts off by introducing us to Rei and her little sister Mirai. They both wake up in a demonic world and don’t know how they get there. Unfortunately this leads to a monster showing up and the only way for Rei to defeat him is to open up a contract with the two leaders of this realm. They reveal that this world is Purgatory and that doesn’t bode well since Mirai ended up getting destroyed during the chaos early on. Her soul is now flying through purgatory and if it reaches the gears of revival she will be lost forever. Purgatory’s rulers give Rei a simply contract. They will give her the power to fight through the underworld and save her sister but in exchange she must destroy the Revenants that plague the world. Rei is determined to do whatever it takes to save her sister so while she doesn’t trust these self proclaimed demons and thinks the contract is suspect, she doesn’t have much of a choice.

As you can tell the game’s plot is pretty deep as usually I could summarize the whole thing in one paragraph. As you may guess from the term purgatory this is a world you only enter if you are dead. The only exceptions are that revenants can suck away living humans into this demonic world in order to eat their souls. Technically revenants can also go after other revenants and dead souls, but a living one is worth a lot more so it speeds up their quest for revival. One they have attained enough for revival they will be able to go back to the real world and resume their life or potentially use their power to destroy it. It’s why the Executors (People who have signed a contract) are told to destroy them to keep the balance.On one hand, you’ve gotta take these guys down because they are eating all of the good souls as well. When someone dies if they forget their identity they become butterflies. Ones that retain some identity eventually level up into becoming a special butterfly or a revenant.

Ironically the ones with the strongest wills are the ones who are hunted. Strong mental fortitude is one of the most important traits for a soul to have in order to escape this place. So there are a lot of things to think about when targeting all of these souls but at the end of the day there doesn’t seem to be another way to save Mirai. For my two cents on that, the people are already dead and the ones who are mindless are just monsters at this point. Most of the revenants are completely evil as well and it would be hard to take them to prison. I do think it’s the right move not to destroy the good ones but of course it is tough since they all tend to lie quite a lot to get you to lower your guard.

As for the gameplay, it’s a 3D best em up. You travel through maps that are created like a maze as you search for the exit. You rarely have to fight enemies but I recommend taking on most of them since the level ups are important. If you get to some of these bosses at a low level they’ll just end up crushing you with no mercy. One hit would be enough to finish you off and that’s not putting yourself in a great position. If you just fight all of the enemies you come across during your route in the game then you’ll be just fine when it comes to these challenges. You’ve got your standard attack, power attack, and a bunch of special moves. The power move is extremely slow though so I don’t recommend ever using it. It just never comes in handy and is so much slower that the slight increase in power is not worth it. This is partially due to the fact that you can dash cancel your standard combos. What I’ll do is throw out 3-4 hits and then immediately dash to continue the combo. A lot of games that use a dash feature end up having this feature so I always try for it. You always feel like this can’t be intentional because it really extends the combo, but if it’s there then I’m gonna use it.

I ended up beating the game at a relatively early level as I hadn’t even hit 30 yet. It wasn’t bad though and I could still deal a good amount of damage. The equipment you have is the important part and I also bought a lot of food to amp up my stats during the fight. Leveling up will certainly help you beat bosses easier but it also makes the levels a lot longer so you just have to decide how to want to play this. I got to enjoy using all 4 characters throughout the game. Rei is definitely the most balanced one and my favorite for taking on minions. When the bosses would show up I liked Kokoro because while her attack range is terrible her power is through the roof. When she lands hits the bosses definitely feel it. Sen’s a good all around attacker so she’s good to switch in as well. Nanana is pretty broken with her projectiles but they deal an extremely low amount of damage. Put it this way, you can beat any level/any boss with ease using her, but it’ll take a super long amount of time. Keep her on the bench for emergencies.

The graphics are definitely solid here. In game it’s got a very goth/end of the world feel to it. It makes for a good atmosphere and the colors really stand out. I was also happy to see a full anime intro to the game which was pretty cool. The soundtrack is also pretty good. It’s not super extensive or anything, but it complements the game well. The game is definitely pretty somber the whole time so don’t expect to see too many bright colors or happy themes. The happiest theme is probably when Rei is at home, at least that part feels pretty normal.

As I mentioned the story is pretty dark. The same goes for even the normal levels as every enemy you face used to be human. When you destroy them they tend to throw curses at you hinting at how they died. Pretty much everyone has a tragic backstory here with everyone’s souls constantly crying at you. Crying is how you get stronger so prepare for a ton of that. I dare say it crosses the line a bit when one of the animals gets involved. The game handles it as well as something like that can be handled since there’s no blood and at least it happened painlessly in the human world, but I still did have to strike away a star for this. It really wasn’t needed in the game and the whole thing would have been better off without it.

As for the characters, they are all pushed to the breaking point as the game goes on. Rei definitely handles this the worst from all of them. I still don’t really buy into her stabbing the wrong person by accident the way she did. I’d like it if the game implied that someone forced her to do this, but surprisingly that didn’t happen. The whole game was someone’s plan so it’s reasonable to say that she did something, but it’s hard to confirm that. Regardless Rei cracks quite a lot as the game goes on. Everyone is always messing with her, but you still have to put a lot of blame on her.

Kokoro is a fun enough character aside from her Rei antics. She does a good job of moving past her origin story and keeping a lid on things. She’s a dependable ally to have. The climax of her character arc is similar to Captain America: Civil War’s so you’ll have to choose which side you’re on. I have to say that I’m on Kokoro’s, but it’s written well so you can understand where both characters are coming from. Sen’s a good character who’s justice angle is solid. She’s probably the most heroic out of the group although by the end her justice appears to waver. It’s a personal situation, but doesn’t change the fact that it goes against her ideals. Then we have Nanana who gets a smaller role than the other 3, but is a lot of fun.

She probably gets the roughest hand out of the group though because most of her scenes are people being mean to her. She’s always nice in response though so it gets pretty emotional. For supporting characters we have Mephis and Pheles. They’re more annoying than anything, but I suppose you need cryptically evil characters to balance things out. The one with glasses at least plays it straight though and gives some actually useful info. The other one just trolls 24/7. There are more characters but you should really play the game to get the full scoop. It has so much story that it’s like watching an anime or a movie.

There’s a lot of replay value here. For starters the game has 4 different endings. Beating the game once took me around 11.5 hours. Fortunately you don’t need to beat the whole game again for the different endings, but I fully expect you’ll be at 30+. Then if you want the Platinum it’ll take even longer. So there’s definitely a lot to enjoy even after you beat the game here.

Overall, Crystar is definitely a really solid game. It’s certainly very different from your average beat em up game. The whole thing really felt like Madoka from the abstract drawings to the contracts with the demons. I dare say that the game is even more grim as nobody really gets a happy ending here. Granted, I only played the default ending so I’m sure the true ending probably gives everyone a better conclusion. I’d definitely recommend checking this game out, but if you don’t like sad stories then this one won’t be for you.