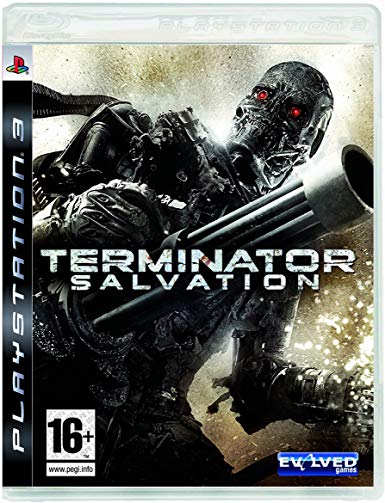 It’s time to look at a PS3 game that I’ve been meaning to buy for a very long time. Terminator’s always been a pretty fun film series and it makes for solid games. Who doesn’t want to try and save the future from the Terminators right? This one is especially well known because it’s supposed to be a pretty easy Platinum trophy game and it’s quite short. It is a shame that it couldn’t be a bit longer, but I thought the game accomplished a lot in the time it had. It feels like a cinematic experience and had more cutscenes than I expected.

The plot of the game follows a man named John Connor. He is the child of destiny and has always been targeted by the machines. One day he decides to finally take more responsibility and heads into a war zone to save some men who have been trapped. The army believes this is a suicide mission and doesn’t follow him so right now it’s up to him and one lady who accompanies him. Can they possibly travel across a vast city in search of these survivors without getting destroyed by the opposing armaments? It’ll be difficult but John is ready to try.

It’s a very enjoyable story. It’s been quite a while since I watched the film so I don’t know how closely it follows the plot, but the game at least did a good job of building up the characters and the world. One interesting thing here is how much of a threat the Terminators are. They don’t appear very often as you usually fight drones. When they do appear you really can’t try to fight them in the open field. They will drain your health away almost instantly with their fast machine gun shots. It’s nice to see them as such a threat because in the films it is usually very difficult to defeat even one of them. They have grown a bit weaker in newer films as the humans can take some of them down, but in the originals you just weren’t going to win. The final level of this game even puts you in a position where winning is nearly impossible.

I actually died the first time in this level because I tried to beat them at the end. The trick is instead to run to the nearby chopper and that cuts you to the ending. If you stay and fight then you die and that’s the overall message of the game. You can’t stay and fight every time. Sometimes you just have to beat a hasty retreat. Espionage is heavily focused on in this game. You hide behind cover and then take shots in order to guarantee success. The mechanics of this are pretty solid. I like to just run in and shoot but the game makes that almost impossible to do. Your best bet is to hide behind things and even then the game can be a little difficult at times. If you pick the wrong route then your only route left may be the death screen. You have to really think about every move you make before you do it.

The best weapon in the game is easily the rocket launcher so I recommend having that on hand whenever possible. Usually you don’t see this weapon very often in the game so save your few shots for when you are in a really tight spot. I liked to save it for when I would actually be fighting a humanoid Terminator. They are easily the trickiest opponents to fight and the rocket only needs 2 good hits to take them down. Otherwise I used a shotgun for most of the game. You’re allowed to carry two weapons at all times so those were my two. There are other good weapons to be sure, but these are the two that really worked out quite well for me.

The graphics here are quite impressive. This is a PS3 game with a lot of effort put behind it. It doesn’t feel like your average movie tie in and is more like a AAA title. The backgrounds look nice and while the game does get a little too dark at times, I believe that is more due to my TV having that issue as opposed to it being the game. The soundtrack is also good with all of the usual Terminator themes you should be used to. You can beat this game in around 5 hours or so and the only replay value is to beat the game again on hard to obtain all of the trophies. The game won’t last long but it goes back to quality vs quantity. It’s short but you’ll feel like you got your money’s worth.

Overall, Terminator Salvation is a great game. It definitely exceeded my expectations of what I was expecting here and I would rank it pretty highly among the others. My favorite is probably still the third Terminator game since I really liked the combat system there and it also adapted one of the most exciting movies which doesn’t hurt. Still, if you’re got 5 bucks to spare then this is a great game to check out. You’ll really get to learn how to play a shooter game very carefully and the skills should transition into others. Before long you’ll be a pro at the ole run and gun style.