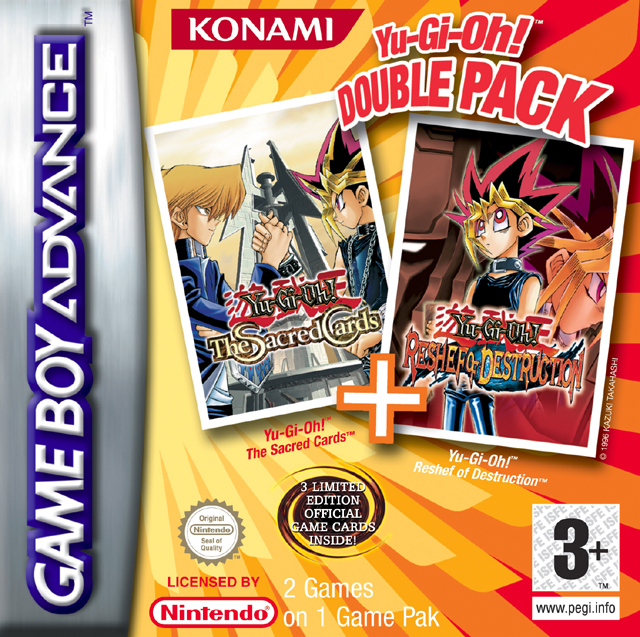 It’s time to look at a Yugioh game that has been on the backburner for an extremely long amount of time. I remember playing this game for ages a super long time ago. I wish it kept track of the play time because it must have been at least 20 hours. Neither one of these games are short and they are both quite challenging. Reshef of Destruction in particular is extremely difficult and it’s a game with an almost impossible final boss. This is definitely one of the best Yugioh games I’ve ever played though and the duo probably has the best plot.

First up is The Sacred Cards. This game basically has the Battle City plot from Yugioh. A big tournament is underway which Kaiba is using to get the 3 Egyptian God Cards as well as to prove that he’s better than Yugi. The main character of the game enters the tournament as well and slowly but surely he begins to wreck every single character in the series. One fun thing about games where they make up an original character is that he is always unbelievably broken. Seriously, there is nobody who can even begin to challenge him which is pretty crazy. Can the main character stop Marik and his plans?

In the Reshef of Destruction game we get a completely original story which takes place after The Sacred Cards. It’s pretty cool that the games have a continuity. Well, the lead has saved the day but a mysterious villain known as Reshef is quickly approaching and threatens to plunge the world into darkness. Pegasus seems to be involved in this somehow and even Kaiba/Yugi are unable to stop him. It looks like they’ll have to call in the real champ to solve this issue, but can even Terry take this guy down? Seeing as how I was unable to beat the final boss I suppose the answer to that will have to be no this time. I’ll go more into that final boss in a second, but needless to say he is completely broken.

Both games have effectively the same gameplay and style which is why I figured I would go over both plots first. The gameplay is about as smooth as I’ve ever seen Yugioh. To date my favorite game in terms of gameplay is World Championship 2004 or 06 while my favorite aesthetic is Tag Force. This one isn’t quite able to top both of those, but it is able to keep up. One nice enhancement is that the game quickly auto scans the field after every turn instead of giving you prompts so it only gives you the option to use a spell card when it’s applicable. The turns go by very quickly as well. Using the back button to look at the details is a little odd so that takes some getting used to, but it’s fine.

One difference in this game compared to others is that you have to get strong enough to use various cards. Your duelist level and deck capacity goes up as you win duels. So for example you may need 250 deck space to use someone like the Summoned Skull and your Duelist level would need to be at least 50. I suppose this is to prevent you from going to the shop and assembling an intense deck but I don’t really care for this mechanic. Maybe I should specify that it is the execution which is a little dodgy. The concept could have worked but by the end game your level only goes up by one per duel and same for the capacity. It would take forever at that rate to ever get anywhere near where you would need to be to get some good cards. It’s pretty sad to have so many cards sitting in the trunk just waiting for their turn at bat. I had some great cards in Reshef which I never got to use because they were so high leveled. Keep in mind that I got to level 200+ but that still wasn’t enough.

The Sacred Cards was a difficult game but not an unfair one. With enough strategies and planning you could really end up having your way with the villains. That was more up my speed and I can tell you that it worked out quite nicely. I built a fire deck with a health amount of trap cards and I was set. As for Reshef, from early on you can tell it’l be tricky. For starters, your health points don’t regenerate between duels. This means that in some sections of the game you will have to beat up to 4 duelists in a row without gaining life points. This means you have to destroy them and even with a great deck it’s hard to show that much dominance. It took me ages to get to that point.

There’s also a new mechanic added into the game which are the type advantages. Effectively how it works is they surpass attack points. If you’ve got a fire monster with 4000 attack points and I have a water one with 200, my water type will bypass damage calculation and just destroy yours automatically. I’m guessing the game did this to counter how powerful some of the monsters are, but I don’t think it was a good idea. At the end of the day all it really did was widen the gap because the computers would really take advantage of this. I think now’s a good time to talk about the final boss and why he is easily the toughest boss I have ever faced. First off, this guy has 10,000 lift points. Next up, he has the Change of Heart spell which he will always save to snipe one of your strongest monsters. It’s hard to have any counter play to this and he can usually win the match here since it comes at such a dangerous point in the duel.

He’s also got a second version of this where he absorbs your monster and adds it to his own. Then he’s got two copies of Swords of Revealing Light which prevent all of your monsters from attacking for 3 turns. Good luck surviving this long because he can still attack during this period which can go up to 6 turns. He’s also got the wave trap which erases all of your spells and traps as well as a card that wipes out your hand. Basically no card you have anywhere is safe which adds another layer of stress. So good luck trying to beat this guy when odds are that you won’t have a high enough duelist level to use most of those abilities. They’re all just too broken and the fact that he has all of them at once is crazy.

Nevertheless, after about 50-60 rounds with him I won…or did I? After you wipe out his 10,000 life points he instantly revives. This time he has 20,000 life points. He’s got all of the cards he had before except there is one big change. He now has the God Cards in his deck. If he summons one then it’s basically game over for you. God Cards have more attack power than anything in your deck and they can’t be affected by spells or trap cards. How does a villain have this in his deck when you should possess the only copies of those cards? The whole thing is crazy and your life points don’t recover as I mentioned earlier so you’re fighting a guy at 2X power while you may be at half strength. I only made it up to this guy 2-3 times total and I got blasted away each time. Outside of codes and such he seems almost impossible to defeat nowadays. You’d need an incredible deck to put him down.

The graphics are fun enough. It’s got a nice chibi style that flows well with the story. The illustrations we get are nice and there are a good amount of backgrounds to enjoy. I do think a solid amount of effort was put into these two games and they’ve aged really well. The soundtrack is a little more on the forgettable side though. Despite the shows having excellent soundtracks I feel like the games have always been quite a few steps behind. Only Tag Force had an awesome soundtrack all the way through.

You don’t need to worry about length. As I mentioned both of the games are pretty long. You’ll be playing for a very long while as you increase your level and improve your deck. Your deck has to be incredibly powerful to even stand a chance against the villains at the end of the game. For replay value there are a bunch of post game duelists to contend with and naturally you can expect those guys to be crazy strong as well. If you are able to take them down then you will have really proven your Yugioh skills beyond a doubt.

Overall, Yugioh Double Pack is really a steal. It’s bringing two RPGs inside one cartridge for a very small price. It’s just hard to beat that, especially when both games are top tier even if the final boss for Reshef is a little too powerful. I’m sure it will feel great when you do eventually defeat him, but that’ll probably take a very long time. He’s not the kind of enemy you can just show up and defeat without a plan.