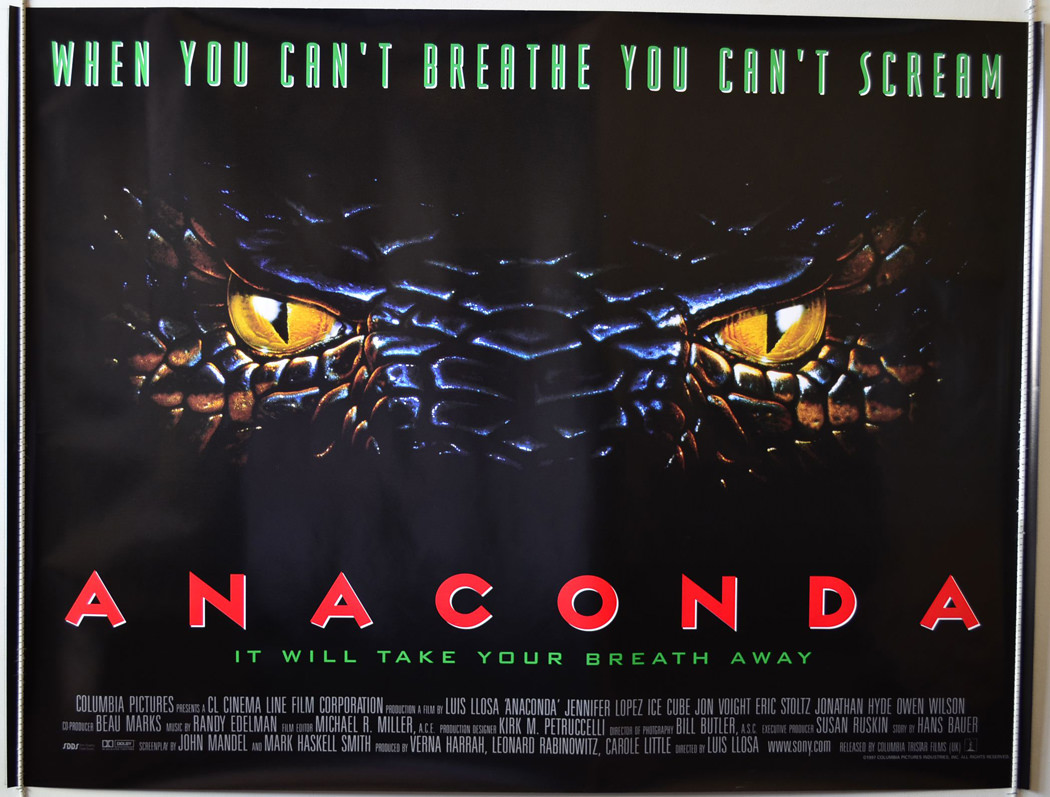 It’s time to take a look at an old snake film. Whenever the main villain of a film is an animal that’s a pretty bad sign for the film since it’s going to be hard to defeat it without resorting to animal violence. Whether the animal is an antagonist or not, injuring an animal in a film will always lose you some points. At least if you’re a series like a comic strip of a television program you can have enough episodes to counter it. A single movie? That’s a tall order and this film wasn’t able to get around that. It’s a weak film with or without the animal element but it didn’t help matters.

The film starts with a quick murder. We then cut to Terri and her crew as they are filming a documentary about a tribe that lives nearby. Unfortunately none of them know where the tribe is so they’re basically just wandering aimlessly. Their boat runs across a man named Paul who says he used to be a pastor and now he’s a snake hunter. The heroes mostly find this guy suspicious but let him and his large bags come aboard without doing any kind of check. He then starts to give them a lot of directions and before they know it the group is now on a completely different course. Steven is injured so Paul has assumed control of the ship. Will he really take them to the nearest hospital or is he just leading them to their doom?

From the start you can tell this guy is probably a villain but you can understand why the heroes picked him up. What they should have done immediately after was check his bags though and at least held onto the guns. Why give a guy you just met 5 minutes ago access to all of your weapons and life supports? Seriously, they give this guy complete freedom on the ship after knowing him for a few hours. The guy can tell a catchy story but they really shouldn’t be so careless in the wild. The crew initially outnumbers him but slowly the crew starts shrinking and their odds grow worse and worse.

The most annoying part here is probably how many times Paul punks them as the film goes on. From heading to abandoned boats to getting others to leave for a bit, Paul plays everyone like a fiddle. He’s also pretty smug about it as he finds everyone’s deaths amusing and nobody even points a finger at him. By the time they give him the loaded gun you’re just shaking your heads at the leads. Even once they finally do have him down for the count you’ve always got that one crew member who manages to somehow lose a fight to a guy who is tied up and on the ground. The scene is hard to buy into. Surely you’d at least be able to stab the guy while you’re that close right? Paul gets way too much hype as a villain. The heroes probably should have beaten him up a bit more. Terri’s right that they shouldn’t murder him, but break the guy’s legs or something. At least tie him up better. In films I don’t get why they just tie the villain up with a quick strand of rope. Since their lives are in danger they should have used a ton of layers at the very least.

As for the characters, it’s not the strongest cast I’ve seen. Gary is annoying the whole time as he is quick to sell everyone out for some cash. You’d think he would have some more principals. Following a guy you just met isn’t a good idea. Meanwhile Denise means well but she looks terrible at the end of the film which destroys her character. She spends way too much time gloating and getting psyched out to be taken seriously. Steven does a good job of at least trusting his instincts over Paul’s, but he was one of the people who was quickest to believe Paul’s story so that loses him a bunch of points from me.

Mateo is a character who clearly had a past with Paul. He doesn’t bring it up and doesn’t clue anyone in. I can’t tell if it’s because he’s afraid of the guy or afraid that since he was illegally poaching the heroes would turn him in. Either way he makes the worst call of being the last one on the ship knowing that the place is super dangerous. He probably should have done….just about anything else. Warren’s got some character at least as he likes a good game of golf. Right away he threatens to murder Danny though and you realize why you would never want to go on a cruise with these guys. Warren was one of the most entertaining characters at least.

The best character was definitely Danny. He didn’t give up as quick as the others and was always ready for a fight. He comes up with some good plans at the end and steps up to the plate when the chips are down. He’s easily the highlight here. Terri’s the director of the film so she’s got a good amount of say as well. Unfortunately Paul definitely tricks her quite a bit as the film goes on and she usually makes the wrong decision. While her plan to nab Paul ended up working, it’s a plan I never like. I think you just need to go in and take him down. If Terri had let Danny go to finish off Paul early on then most of the film may not have even happened. That would have definitely been the easiest way to end things.

This film is pretty violent so definitely keep that in mind if you’re checking it out. The snakes aren’t playing around and there is a decent body count here. Since people are getting crunched it’s not quite as violent and the TV version I saw cut out most of the actual climaxes, but even so this can be an intense one. There is quite a bit of animal violence here as well with the snake taking a lot of hits and a monkey also being shot. As a result the film keeps on shooting itself in the foot. The writing is pretty terrible as well with a lot of plot convenience for things to get nearly as far as they did. Any reasonable crew would have bumped Paul off early on.

Overall, Anaconda is a film that drags on as it goes for a lot of quick thrills without much story to back it up. The characters are annoying and the pacing isn’t very good. The main Snake makes for some striking visuals as it busts through windows and doors while approaching its prey. It’s a good antagonist but at the same time there are only so many ways you can show off a snake so before long it gets into almost recycled footage territory. If the film had taken place in a city I think it would have been more interesting. Anaconda plays itself pretty straight so there’s no real humor or anything. I think it actually could have used some of that. As it stands, I’d recommend watching something else instead like Sonic The Hedgehog while it’s still in theaters.