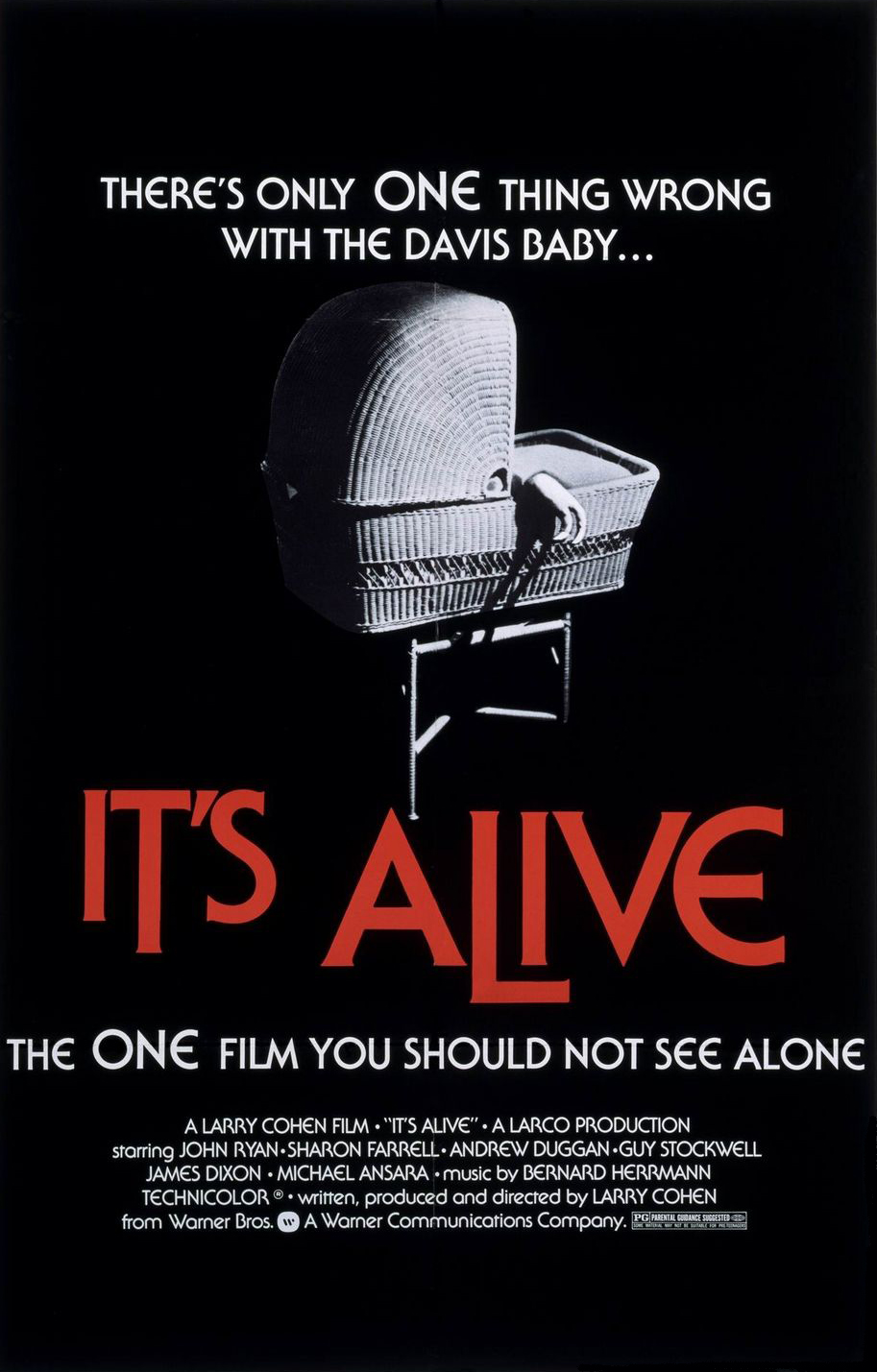 It’s time to check out a film about a monster baby. This seems to have been quite the popular genre back in the day with a lot of terrible films that had a similar premise. I can’t say that this film is much better than those. It’s pretty much what you would expect as the monster slashes through everyone until eventually someone remembers how to fire a gun. The plot requires a lot of suspense of disbelief with how slow everyone is to react and how nobody acts realistically. It’s definitely a movie that you will want to avoid.

The movie starts with Frank and Lenore excited about their next baby. It’s about to show up so they head to the hospital. Unfortunately the baby jumps out and murders a bunch of people before escaping through the air ducts. The hospital asks Frank to keep this quiet so they can exterminate the monster in peace. Frank gives them his blessing and is promptly fired from his job as a PR guy. He takes Lenore home and they tell their kid Chris to stay at a different house while this all blows over. Unfortunately the hospital and the police have a hard time tracking down this baby so it goes on a murder spree as it gets closer and closer to where Frank lives. After it murders a few more people it is now ready to go home. Can Frank stop the monster and save the day or are they all about to get eaten?

There are a ton of problems with this film but lets start with the biggest one. The film squeezes in some animal violence for no discernible reason. The instant you see that Chris owns a cat you know that things are going to go south. It’s pretty much the film throwing in the white flag before it has even started. It naturally gets destroyed by the end of the film in a pretty gruesome fashion. It takes away from the film’s attempt to humanize the monster by the end by saying that it won’t murder family. The family pet is clearly family so I don’t think the writers were really looking at the right script. There’s no way to sympathize with the baby at this point.

It also makes Chris’ reaction feel rather off. He notices the cat right away, but then dismisses this as he tries to console the baby. That’s not really a proper reaction, it just makes you think Chris has gone nuts. Perhaps the experience broke his mind the way that it did for Lenore. She looks pretty bad the whole time too. At first she is pretty crazy when the experience first happens and seems to be on board with destroying the creature. Later on she grows attached to it after it’s already murdered tons of people. It’s simply too far gone by then and she should realize that storing it in the back will only delay the inevitable. Again I must also point out that the cat was taken down by this point which is no good.

Then the film is also quite violent. It’s one of those films where the director must have had many pots of paint at the ready because he tends to throw it at all of the characters right off the bat. Everyone dies as violently as possible. We rarely see the creature move so it’s hard to say how fast it is, but it’s the size of a baby. How is it destroying so many people? People never seem to use their guns in times and just stand there like sacks of potatoes as they get completely train wrecked. I’d have liked to see people at least put up some kind of fight. It’s like Attack of the Killer Tomatoes. There’s no realistic way you should be losing to a tomato. This film’s all about shock value so that’s really the only point to all of this. I guess they figured it doesn’t have to make sense so long as it is entertaining. Unfortunately it wasn’t entertaining.

At least Frank is trying to end this although he also gets a little too obsessive on trying to put distance between himself and the creature. What he should have done was move out of town for the 3 weeks with Lenore and Chris and hope that the monster couldn’t follow them. It would allow them to get some new surroundings and hopefully help with the coping process. So long as that was accomplished perhaps they would all be able to move on. To be fair, he had no reason to assume the baby could follow him all the way home but in horror films like this the overall message is really that nobody is safe. Wherever you go there will always be the monster right around the corner.

One of the worst parts about the film is the fact that it’s just not interesting. An evil baby doesn’t make for a visually interesting villain nor are the characters good enough to keep you engaged. It’s a very bleak film the whole time where the heroes can’t trust anyone. Everyone seems to be out to get them and if you’re a remotely nice character then you’re gonna get bumped off. Ironically the nicest characters are the ones who end up paying the highest price. If you’re looking out for yourself then odds are that you’ll survive this experience which is pretty odd. That’s not exactly what you would have expected. The film could have been a little more decent if Lenore hadn’t gone crazy by the end but I don’t think the score could have been saved all that much if at all. This film was just beyond help.

Overall, It’s Alive is a pretty terrible film. There really isn’t anything redeemable about it as it checks off all the wrong boxes. The characters are pretty terrible and really make the worst decisions possible. The creature murders way too many people before being taken down to the point where you have to stretch your disbelief quite a lot because there is no way all of the humans should be losing like this. It’s just crazy to see everyone going down like dominoes. I’d highly recommend watching something a little more wholesome like Alvin and the Chipmunks. That one shows how you can bond with a nice creature as a child or sorts as opposed to an evil child in this film who doesn’t even appear to be human. Perhaps there was a good message here once but it’s all gone as the film goes on.