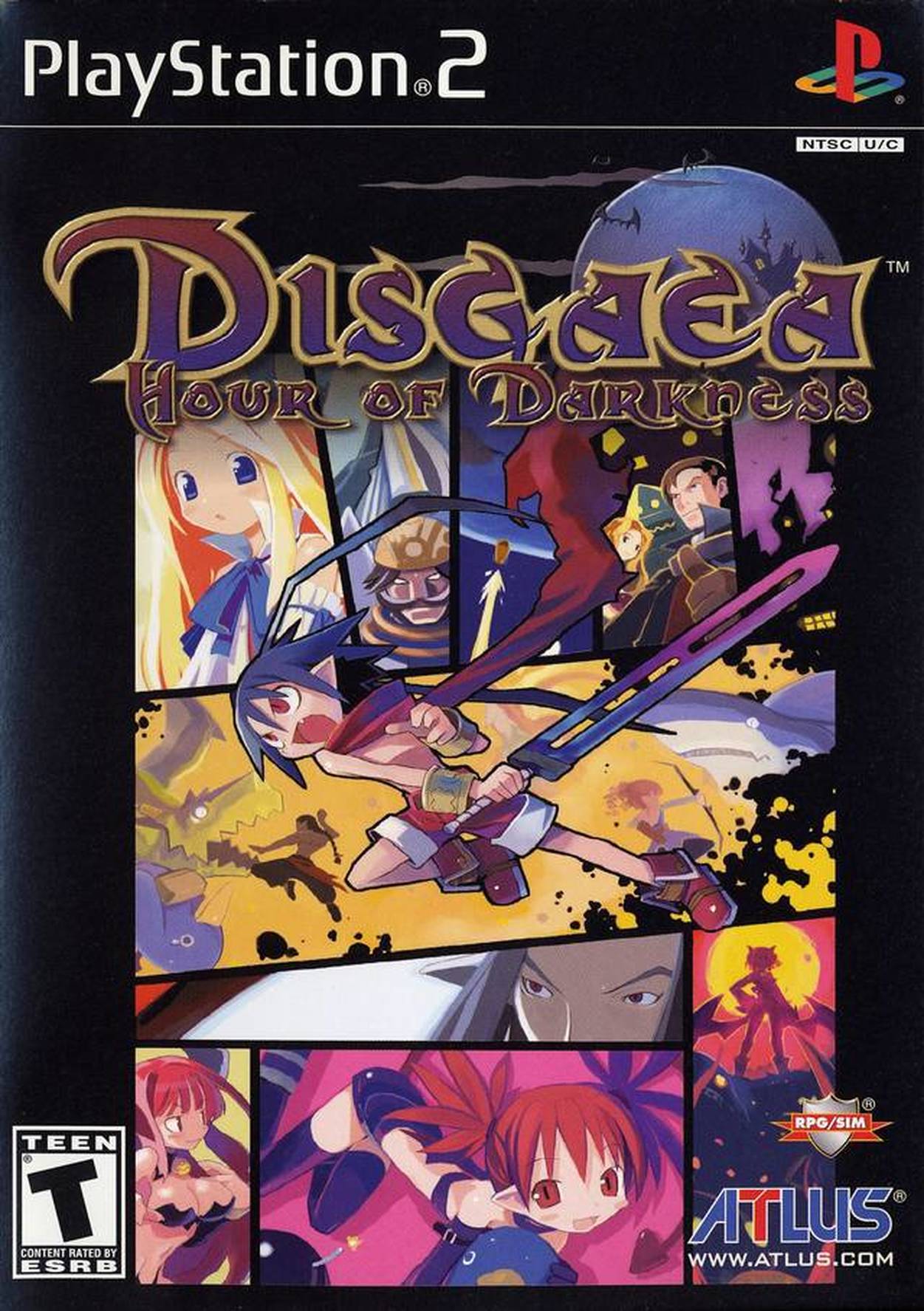 It’s time to look at a pretty big RPG that I’ve had on the backburner for quite a while. Disgaea always looked like a blast and I’ve heard nothing but good things about it. Most RPGs tend to languish for a while though as I focus on the shorter games, but it was time to finally just jump in and this game was worth the wait. The game definitely takes a lot of strategy and grinding levels to get through but it always feels like you are making good progress here.

The game follows the demon prince Laharl. His dad died when choking on a pretzel and Laharl nearly got assasinated in his sleep, but the assassin messed up and didn’t give him enough poison. Laharl is now determined to prove that he is the Overlord as the rightful son of the former king, but he will have to earn this respect by beating up all of the other demons. An angel named Flonne is sent to assassinate him but she can’t go through with it because it doesn’t seem like a holy thing to do. She is determined to prove that even demons can experience love and other emotions so she tags along with Laharl.

There’s a lot of plot in the game, but needless to say it involves a lot of big battles with the humans of Earth, the Angels of Celestia, and even other Demons. Along the way Laharl, Flonne, and Etna gradually become more like actual friends and we meet other party members as well. Can Laharl ensure Flonne’s safety through all of this or will he see this emotion as weakness and ultimately leave her on her own? He’ll have to face his many insecurities along the way in this journey.

The story’s definitely solid here. The game has a lot of fun with the various accents that the characters have. The Dark Adonis (Or Mid-Boss as the characters call him) definitely has the best voice. He’s a very quirky character but one that works quite well. A lot of his scenes are pretty fun. I like how he laughs with such confidence and you can always count on him showing up in various chapters. He’s also one of the most deadly bosses as losing to him will cause you to go all the way back to level 1 and have to replay the whole game. Just reset the console at this point, resetting the game is not worth it if you ask me. There isn’t really any benefit to going through multiple cycles.

The Defender of Earth, Gordon is also pretty fun. He has that very over the top hero voice that most shows use as a parody nowadays. He may not be very smart but his heart is in the right place. Some of his decisions towards the end of the game are questionable though and do hurt his character. Jennifer was fun, she’s definitely the real brains behind his team. She certainly likes to mess with Laharl a lot though. The only weak part of their trio and one of the weakest characters in the game is Thursday. He’s not nearly as entertaining although he has one or two good lines. He just takes way too long to get to the punchlines.

There are a solid array of villains here. I really don’t get the Seraph’s plan though. I can’t talk about the ending much so as not to give spoilers here, but the test wasn’t very good. It’s all a bit convoluted on his end and you can’t really justify any of it. The game has multiple endings so things will change a bit based on how you play the game. I got the standard ending which is definitely pretty emotional. I wasn’t expecting such a sad ending considering that there are a few sequels. So far they don’t seem to tie into this one very much though. It was a good emotional ending.

One side character that is a lot of fun is Kurtis. He doesn’t get a huge role but whenever he appears you know that something hype is about to go down. In general the game really turned up during this part of the game although all of the chapters were pretty fun. From the main 3 characters Flonne is the weakest one although she’s still reasonable. She’s definitely a bit on the naive side and can be quite pushy but she’s a nice friend to have. While I didn’t have a proper mage she was still reasonable for healing a bit at times.

Etna was another main character and she’s a blast. She narrates the next episode previews for most of them and likes trolling everyone. She’s completely unhinged so you never know if she will help out or stab you in the back. I suppose that makes sense for a demon though and Laharl always seems proud of her for that reason. She’s pretty entertaining and a good example of how to properly make a crazy character. Finally we have Laharl. He’s a bit whiny and self conscious because nobody ever pays him any respect but I liked him overall. He’s definitely quite powerful even if there are some enemies who are clearly above him in power. He may be the Overlord but that doesn’t make him the strongest. He gets a lot of development as the game goes on and we also get glimpses into his tragic past.

The gameplay is quite smooth. The levels can take a little while because of the nature of the game though. You command up to 10 characters at a time and levels can have up to 15 enemies. That’s 25 character turns you have to watch each time with unskippable animations for their attacks. It’s not as long as it sounds but that’s part of why you will be playing the game for around 30-40 hours. The game is quite long and there’s a huge post game to consider as well. This game can really last you just about forever if you stick around.

The level cap is 1000 which gives you a good indication of what to expect. One thing to note here is that equipment is more important than levels. Your top priority is absolutely getting the best gear you can. If you get stuck for a while on the final boss as I did then I recommend capturing some enemies and selling their equipment. It’s a great way to earn cash. There’s a lot of features I haven’t even touched on here like the Dark Assembly where you bribe senators. There’s a ton of things to do in this game but there are a lot of tutorials to help you out. It’s easily the most complex game I’ve played in a while and the best part about that is you really have a ton of freedom to play it however you like.

The graphics are pretty solid here. The animations are really good and some of the attacks get quite out there. It’s like you’re watching DBZ at times. Then the soundtrack is pretty catchy too. You’ll know the themes quite well by the end of the game but that doesn’t make them any less exciting. This is really a very well balanced game. There are no weak links to be had and it’s part of why I jumped right into the sequel. I’ll have a review for that one up as soon as I complete it.

Overall, Disgaea: Hour of Darkness was really a great start to the franchise. It’s a pretty long RPG so you really have time to get used to all of the characters and master your Xcom skills. This kind of strategic gameplay is really satisfying to get through. You do need to really enjoy the gameplay to really get the most out of this game because replaying levels is effectively mandatory here. There’s no way you can beat the game without getting some good level ups and equipment. I probably spent almost half of my play time replaying levels and the final boss was still a real challenge. How difficult the game is will depend on how you build your team though. The best part of Disgaea is that you can play it hundreds of different ways with some loadouts being better than others. My mistake was not having a mage on my side which I made sure not to repeat in the sequel.