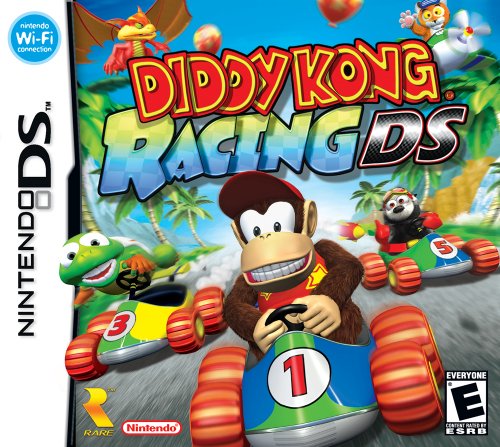 It’s time to look at a Nintendo racing game from a while back. Considering how successful F-Zero and Mario Kart are you may wonder why Nintendo would have another franchise right? Well, everywhere I go people seem to love Diddy Kong racing so maybe it really did tap into another part of the market. I will say that it is definitely pretty fun. Personally I wouldn’t put it on the same level as the other two titles, but it’s still pretty fun. The game isn’t particularly long but with a racing title the main incentive is the replay value here.

There is also a basic plot. A mysterious pig has broken an amulet and is causing a lot of terror around the planet. Diddy must now conquer four different areas in order to foil this plan once and for all. It may not be an easy task, but it’s one that he knows he must accomplish. Each world has 4 main levels and then you fight the boss. Once you beat the boss of the world then you unlock 4 more races which have you aim at balloons in the level. The first 4 levels are traditional races while the other four play out like an FPS as you don’t control the car, only the blaster. This lets you fight the boss again and then claim the amulet. So effectively each world has 8 levels and 2 bosses so you’re got 40 levels here if you count bosses. It’s a pretty reasonable amount but you’ll still have the game beat in under 3 hours.

The levels aren’t particularly difficult for the most part and naturally the levels aren’t too long either. The average race will take you around 2-3 minutes. There are 3 kinds of races. You’ve got the standard car races, the awesome plane races, and the sluggish hovercraft ones. The car races play out about how you would expect. You try to cross the finish line first and grab items along the way. There are 4 different items triggered by hitting a balloon. You know which balloon spawns which item so part of the fun is choosing what you want for each scenario. There’s also an incentive to not using the item right away. If you store away say a red balloon and then hit another one you get the second ranked version of the item. It’s worth experimenting until you find your favorite item. My favorite was double red since it gives you around 6 rockets.

The plane levels are the same way but you’re in the air which is a lot of fun. It feels like this kind of race is the fastest in the game in terms of how fast everyone is moving. There are a lot of boosters everywhere so use them as much as possible. Finally you have the Hovercraft levels which are just really slow and kind of clunky. It’s hard to turn in these and it is just not nearly as much fun as the other two. Something had to lose out I suppose, but I was glad that there weren’t a lot of these levels.

In terms of graphics the game is quite solid. We actually got some voice acting in the intro and the cutscenes flow really well. In game the assets load up promptly and everything looks clear. You certainly won’t be bumping into things just because you didn’t see them or anything like that. That would be understandably a bit iffy so I was glad that the game managed to avoid that. The soundtrack isn’t quite as memorable as Mario Kart’s but it was still pretty fun. There’s a good amount of variety based on what world you’re in and the level. The final boss theme was also very catchy although I got to hear it quite a bit.

While the game isn’t very difficult for the most part, the final boss is extremely tough. I don’t see how it would even be possible to defeat him without buying upgrades to your car. The guy is too fast and he pounded me into the ground many times before I was able to beat him. Ultimately I had to max out my car’s speed and acceleration and then I was able to keep up. It’s not like the level is all that complex. It’s pretty straightforward so I don’t see how you can play it any differently. You’re either able to out speed him and claim victory or you can’t.

As I mentioned the game is around 3 hours but there is a lot to do after the game. You have extra levels in each world where you need to find a key or do various achievements to unlock. The hub world is quite large so you can explore for a while and buying every upgrade will also take a super long amount of time. I wouldn’t say that there are any huge unlockables to look forward to, but at the same time if you enjoy the gameplay a lot then the game is giving you a fair amount of opportunities to keep on going. The value here definitely justifies the cost.

Overall, Diddy Kong Racing DS is a fun racing game. To me it felt fairly standard but with that Nintendo seal of quality. Just having 3 different options of racing does mean you have more options than your typical racing game and it’s a complete package. If you want to enjoy some good racing then you will definitely have fun here. The ending will also give you a nice challenge which is always good. If we do get a sequel to this for 3DS or Switch someday I’d definitely be down with that. The ending is also pretty fun as Pig gets one last laugh against the heroes.