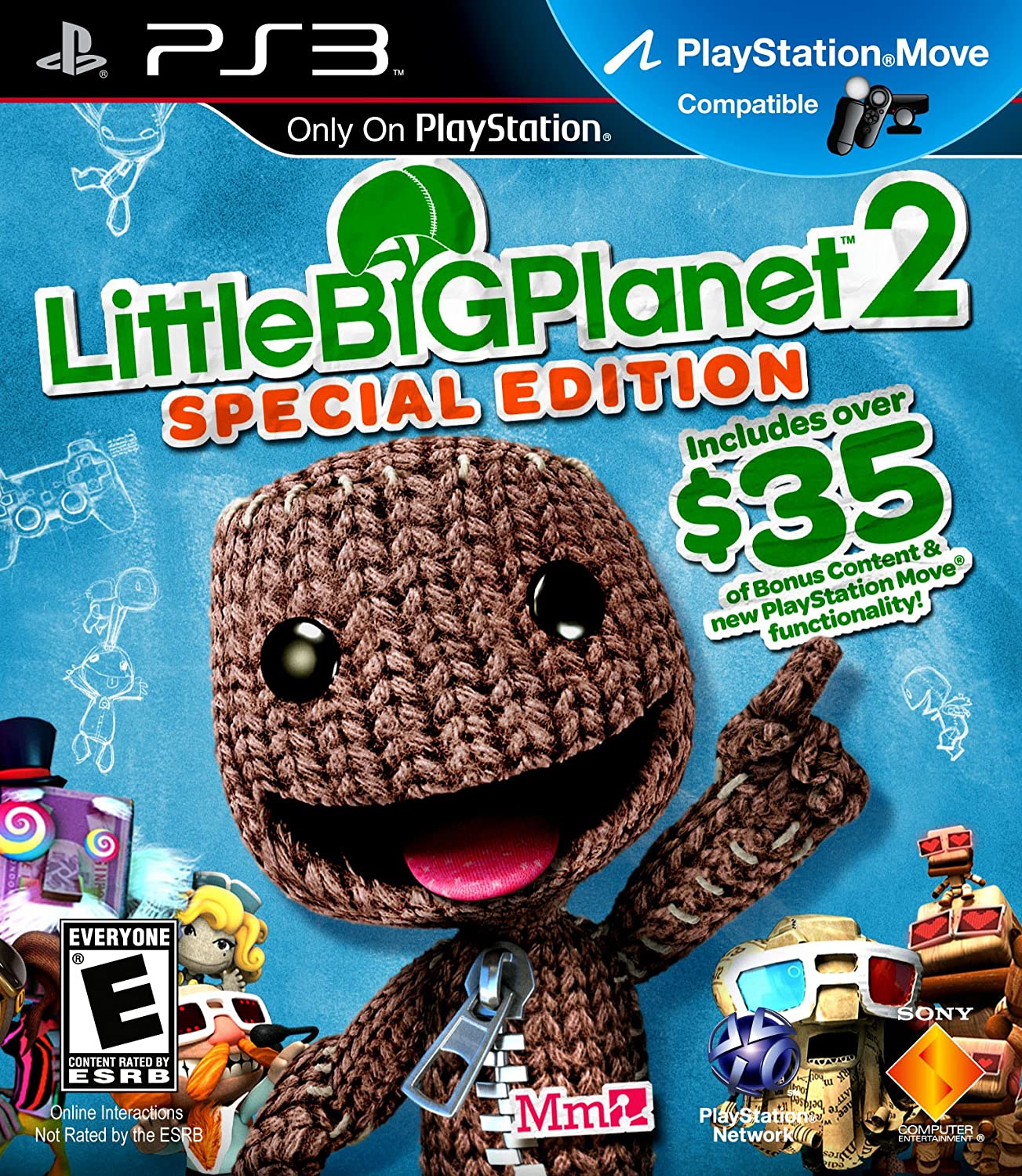 It’s time to look at the second Little Big Planet game. I played the first one a while back and wasn’t particularly impressed. I found the story mode to be rather boring as nothing really happened. Platforming gameplay is fun enough but I do need some kind of story or at least bright graphics to get me through. The first game’s gameplay wasn’t the sharpest and the backgrounds weren’t amazing either so that left me in a spot. Fortunately the sequel greatly improved on all accounts and actually ended up being quite solid. I was impressed with this game and now I can actually say that I look forward to playing the third when initially I scoffed at the prospect.

Sackboy is thrust into another big conflict here. Some dark dragons/overlords have begun kidnapping powerful people and conquering multiple worlds. Sackboy must now team up with a comedian, an old man, a queen, a fighter in order to take these guys down. Sackboy may not look like the most intimidating character in the bunch but he has the power to interact with anything and he’s got a lot of determination on his side as well. He won’t be going down easy and with his friends at the ready maybe they can actually make a real change here. He won’t know until he tries so Sackboy is ready to defy all odds and get started here.

First off the fact that this game actually has a real story nearly blew me off my chair. I was pleasantly shocked to see real cutscenes with voice acting and everything. The story even has an epic feel to it with powerful opponents and a lot of scary designs. The purple monsters are excellent and they all look quite evil. These aren’t kid designs or anything like that, they’re just going in. The worlds all have pretty unique designs and gameplay strategies to them as well which is good and there’s a reasonable degree of difficulty here. This is a platformer that is actually trying quite hard. There was a lot of time put into this one.

The main gameplay is that of a 2D platformer. You run and jump past obstacles as you get to the end. There are a lot of extra details and mechanics at play here too though. For starters you’ve can grab onto objects which helps you jump across large gaps. You also throw objects to block some flames or throw them into enemies. You lead mini Sackboys over obstacles as well. Then you’ve got the possession levels where you use a stuffed rabbit or cat to blast your way through levels. There are also levels where you take control of a bee and these are basically sci-fi ship levels. You have an energy blaster and it’s all great fun. I wouldn’t have minded if we got more aerial levels like that. The important thing though is that the game succeeds in all of its different gameplay variations. They’re all pretty fun and well polished.

Graphically the game has come far from the first one too. The first game felt more experimental in a lot of levels as it would have odd looking live action graphics and things of that nature. This one still keeps some of the more disturbing imagery but it’s toned down to a great extent and feels a lot more mainstream. That’s definitely the way I like it and while it’s still not on the level of Mario or Kirby there are some really nice looking moments. The enemies and the final world in general are good examples of that. The soundtrack is a lot more forgettable though. There are no tunes from the game that I even remember.

The length is fairly reasonable for a platformer. I’d say it took 5-6 hours to complete. It’s definitely not the longest title out there but you don’t really expect games in this genre to be all that long. It’s mainly all about a quick experience filled with a lot of creative levels and fun times along the way. The main question is if those levels were fun and engaging to which I can confirm that the title did a good job with this. I was certainly kept well entertained throughout which was good. There also is a good amount of replay value to be found here even if the online may not be operational anymore. You can still collect a lot of items and complete side missions too.

Overall, Little Big Planet 2 brings in every element that I had wanted to see from the first game. It’s a big improvement in every sense and this may be the most improvement I’ve seen from game to game in a long time. If you like platformers then I can completely recommend this one to you. It’s good fun and while some parts of the game can be challenging I don’t expect you would be stuck for long. The final boss is probably the only part of the game that didn’t seem to be designed all that well. The fight just takes too long and there is a ton of waiting here since for most of the fight he is invincible. Eventually you defeat him but it’s a lot longer than it is difficult.