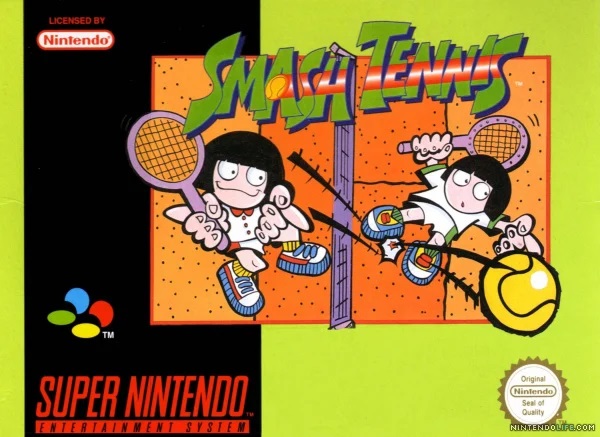 It’s time to look at a SNES game from a while back. I’ve always been a pretty big fan of sport titles because you really get to feel what it’s like to play the actual sport. You feel energy and excitement while scoring points and claiming victory. Really the only way a sport game can go wrong is if the controls aren’t all that good or the sport it is based off of is one that I’m not really a big fan of. This one suffers from the controls.

There aren’t a lot of modes or anything here but as it is an SNES game that should be expected. You really are here to play some good tennis and have fun along the way. You can play against a friend locally or against the computers online. That’s really it so just keep on playing for as long as you’re entertained. The game is free with the Switch Online anyway so that’s always a good benefit. The gameplay is pretty straight forward. Be sure to hit the ball when it gets close to you and the goal is to hit it in a way where the opponent can’t counter it. Furthermore, you can’t hit it too far out of range or it’ll be “out” and the opponent will gain a point.

Typically this is fairly easy to not do, but in this game it is pretty challenging. You’ve got to be very careful in what direction you are tilting the control stick because it’s very easy to hit the ball out of bounds. It seems like holding in any direction will bring some issues with this. At the same time if you just hit the ball straight then the opponent will certainly hit it back at you so as always there has to be some balance here. I played 5-6 games as each match goes by very quickly. Unfortunately I was only able to score a few points at best as the opponent would thoroughly take me apart in each round. He was really not holding anything back here.

You can take solace in the fact that this game is not a walk in the park. You are going to have to play seriously if you want to beat the computer even on a standard setting. They react to the ball very quickly and are totally comfortable with returning the ball even from rather complex angles. The graphics are fun enough. I like the fact that we have background elements in all of the levels which make them pretty unique. You can go from playing inside of a mall to being on the beach to resting at the park. There are a reasonable number of stages and they’re all pretty different so that’s pretty impressive. I can’t say that I was expecting a whole lot of variety here.

Overall, Smash Tennis is a fairly standard tennis game for its time, but compared to modern ones it’s pretty lackluster. I don’t really mind the lack of content so much as that is perfectly understandable, but the gameplay could have been a lot tighter. A lot of times you’ll feel like you hit the ball in time and it’ll still get past you. It feels like a losing battle from the start. No game is impossible because they are play tested and all, but a little more refinement would go a long way. As it stands I’d definitely say to check it out because it’s free so you may as well. At the same time I don’t see you spending more than an hour or two here. Not when something like Virtua Tennis exists.