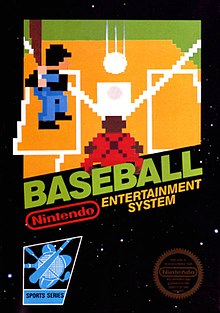 It’s time for another classic NES game. This time we’re looking into the wide world of Baseball. It’s not a sport that I’m a huge fan of both in watching the real thing or playing the video game versions. For the game adaptions, it’s because a lot of the game seems to be RNG to an extent. When you hit the ball you just never know where it’ll go as opposed to something like Football where you deliver the ball where it needs to be. To that extent, I was pretty impressed as I would say this Baseball game beats a lot of the newer ones. The simplistic controls and style actually worked out really well and made the game more enjoyable. I was getting blown out initially but by the end of the game I started getting pretty close. I narrowly lost 15-13 and one more Homer could have done the trick. I probably should have tried for it, but I don’t tend to use the rewind feature in sport titles so I just ate my loss.

The goal of the game is to hit the ball somewhere where the opponents can’t reach it and you score points once you run around the diamond and make it back home. The more points you score the better as the team with the most points at the end ends up winning the match. You throw the ball when the other team is set to hit it and then you shift sides after knocking 3 of their guys out. When hitting the ball you can hold the hit button to keep the bat out instead of swinging it. That way you lay out a bunt and then run for first base. It seems really handy for getting that opening move but after that usually there just isn’t enough time to get to further bases. It’s still a tactic I recommend though.

As for hitting the ball, well that’s where the timing will come into play. Make sure you hit the ball really carefully or you may end up hitting out of bounds or into someone’s mitt. That’s definitely the last thing you want to happen here since a single wrong hit can really make things not go very well for you. The opposing team won’t hold back with their hits after all. Careful when you’re fielding the ball though because missing it once or predicting the bounce the wrong way can end up costing you 1-3 points. Those make a huge difference when it comes to the final total. For all you know that may be the difference between victory and defeat.

There’s not a lot to say about the graphics because it’s basically the same as most of the other NES games. You’ve got some crispy sprite artwork to look at and it’s all pretty easy to see. The menus are clear which is always important. Between that and the solid gameplay you’re set up pretty well. This is the kind of game without a whole lot of extra content so you’ll probably play a game or two and then call it a day.

Overall, Baseball is definitely a fun title. It’s easy to pick up and play and just seems a lot more fun than some of the others like Tennis. As someone who usually doesn’t care for Baseball all that much I was pretty impressed. I’m nearing the end of the sport games on the NES so soon it’ll be time for more of the Arcade thrillers and games of that nature. I’m definitely expecting big things coming up. If you have the Switch Online then there is no reason not to check out this one. Whenever a game is free I feel like you’re obligated to at least give it a quick whirl even if you don’t ultimately stick around. What’s the harm in a quick check right?